In this chapter, we shall study about Some Basic Concept of Chemistry like matter, element, moles, molecules and chemical properties of matter.

Chemistry is the science of molecules and their transformations which deals with the study of matter, its composition, the changes that matter undergoes and the relation between changes in composition and changes in energy. Chemistry plays an important role in meeting human needs for food, health care products.

Chemistry plays a central role in science and is often intertwined with other branches of science.

Chemistry contributes in a big way to the national economy. It also plays an important role in meeting human needs for food, healthcare products and other material aimed at improving the quality of life.

Matter is any thing that occupies space, has mass, offer resistance and can be perceived of directly by our senses. For example, book, pen, pencil, water, air, all living beings, etc. 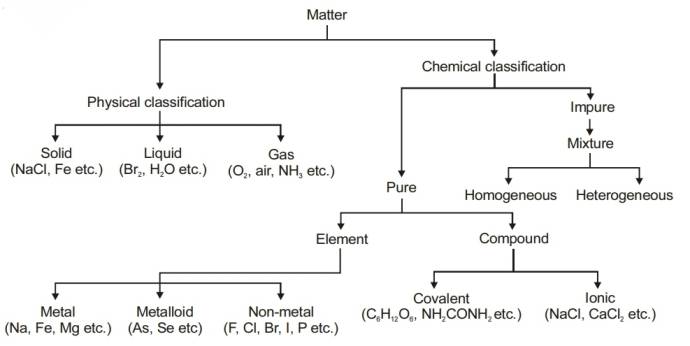 Element is the purest form of matter. It is made up of only one type of atoms, ex.- carbon, iron, copper, oxygen etc.

Compound is the substance which is made up of two or more elements combined together in a fixed ratio by their weight e.g., carbon dioxide.

Mixture is the substance which is made up of two or more substances in any ratio. e.g., Sugar + Water, Sodium Chloride + Water, Sand + Water

On the basis of composition, mixtures are of following type :

1. Homogeneous mixture : The mixture which has uniform composition through out e.g., sugar solution.

2. Heterogeneous mixture : The mixtures which do not have uniform composition through out. e.g. sand in water.

Atom is the smallest particle which may or may not exist free but takes part in chemical reaction. Atom word means not to be cut. Ex- H, Na, O etc.

The international system of units (in French Le Systeme International d' Unités - abbreviated as SI) was established in 1960 by the 11th general conference on weights and measures. SI system is a modification of metric system and has seven base units pertaining to the seven fundamental scientific quantities.

Definition of SI Base Units

(ii). Kilogram : The kilogram is the unit of mass; it is equal to the mass of the international prototype of the kilogram.

(iii). Second : The second is the duration of 9192631770 periods of the radiation corresponding to the transition between the two hyperfine levels of the ground state of the caesium-133 atom.

(iv). Ampere : The ampere is that constant current which, if maintained in two straight parallel conductors of infinite length, of negligible circular cross-section, and placed 1 metre apart in vacuum, would produce between these conductors a force equal to 2 × 10-7 newton per metre of length.

(vi). Mole : The mole is the amount of substance of a system which contains as many elementary entities as there are atoms in 0.012 kilogram of carbon-12; its symbol is “mol”.

(vii). Candela : The candela is the luminous intensity, in a given direction, of a source that emits monochromatic radiation of frequency 540 × 1012 hertz and that has a radiant intensity in that direction of 1/683 watt per steradian.

All scientific measurements involve certain degree of error or uncertainty. Scientific notations, significant figures and dimensional analysis help us in many ways in presenting of data and theoretical calculations.

It is an exponential notation in which any number can be represented in the form N x 10n where n is an exponent having positive or negative values and N can vary between 1 to 10. Thus, 232.508 can be written as 2.32508 x 102 in scientific notation.

All chemical reactions take place according to certain laws. These laws are known as laws of chemical combination.

(i). Law of conservation of mass

This law was given by, a French chemist, Joseph Proust. This law states that a chemical compound is always found to be made of same elements combined together in fixed proportion by weight. CO2 can be prepared by number of methods but always 12 g carbon react with 32 g of oxygen.

This law was proposed by Dalton in 1803. According to this law, When two elements combine to form two or more chemical compounds, then weight of one of the element which combines with a fixed weight of the other, bears a simple whole number ratio to one another. This is called the law of multiple proportions. For example, The ratio of masses of oxygen in CO and CO2 for fixed mass of carbon (12) is 16 : 32 = 1 : 2

This law was given by Gay Lussac in 1808. He observed that when gases combine or are produced in a chemical reaction they do so in a simple ratio by volume, provided all gases are at the same temperature and pressure. For example, One volume of hydrogen and one volume of chlorine always combine to form two volumes of HCl gas.

In 1811, Avogadro proposed that equal volumes of all gases at the same temperature and pressure should contain equal number of molecules.

John Dalton in 1808 published “A New System of Chemical Philosophy” in which he proposed atomic theory of matter. The main points of Dalton’s atomic theory are as follows :

Atomic mass can be defined as a mass of a single atom which is measured in atomic mass unit (amu) or unified mass (u) where,

Molecular mass is the sum of atomic masses of the elements present in a molecule. It is obtained by multiplying the atomic mass of each element by the number of its atoms and adding them together. Molecular mass expressed in grams is known as gram molecular mass.

One mole is the amount of substance that contains as many as entities as number of atoms in exactly 12.00 g of C-12.

Symbolic representation of compound is called chemical formula. It is of following types :

An empirical formula represents the simplest whole number ratio of various atoms present in a compound.

The molecular formula shows the exact number of different types of atoms present in a molecule of a compound.

Relationship between Empirical and Molecular Formula

The concentration of a solution reflects the relative proportion of solute and solvent present in the solution. The various concentration terms are

3. Molality (m) – It is defined as number of moles of solute present in 1 kg of solvent.

4. Molarity (M) – It is defined as number of moles of solute present in 1 L of solution.

6. Normality : It is defined as gram equivalent of solute dissolved in one litre solution.