In the previous chapter, we have discussed about Some Basic Concept of Chemistry but in this chapter, we shall study about Structure of Atom. Atom is made up of still smaller particles like electrons, protons and neutrons. The arrangement of these particles within the atom was put forward by Rutherford (in 1911) on the basis of his "Scattering experiments".

The word "atom" has been derived from the Greek word 'atoms’ which mans 'indivisible’. These early ideas were mere speculation and there was no way to test them experimentally.

Atom is made up of smaller units like proton, neutron and electron. Some other particles like positron, neutrino, antineutrino, π-meson, μ-meson, k meson etc are also present which are very short lived.

In 1879, William Crooks studied the conduction of electricity through gases at low pressure. He performed the experiment in a discharge tube which is a cylindrical hard glass tube about 60 cm in length. It is sealed at both the ends and fitted with two metal electrodes. The electrical discharge through the gases could be observed only at very low pressures and at very high voltages. 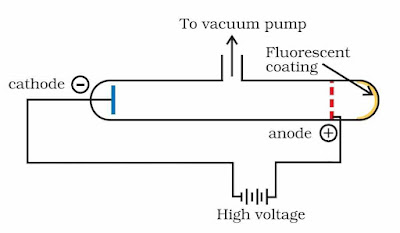 J.J. Thomson took a discharge tube and applied a voltage of a 10000 volt potential difference across it at a pressure of 10–2 mm of Hg. He found some glowing behind anode. It means some invisible rays produced at cathode strike behind anode and produce fluorescence. He named them cathode rays.

J.J. Thomson for the first time experimentally determined charge/mass ratio called e/m ratio for the electrons. For this, he subjected the beam of electrons released in the discharge tube as cathode rays to influence the electric and magnetic fields. These were acting perpendicular to one another as well as to the path followed by electrons.

According to Thomson, the amount of deviation of the particles from their path in presence of electrical and magnetic field depends on 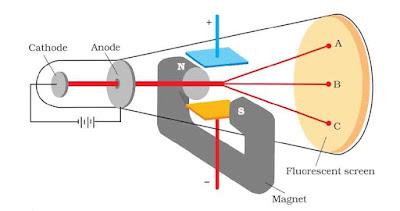 where me = Mass of the electron in kg

e = magnitude of charge on the electron in coulomb (C).

In 1886, Goldstein modified the discharge tube by using a perforated cathode. On reducing the pressure, he observed a new type of luminous rays passing through the holes or perforations of the cathode and moving in a direction opposite to the cathode rays. These rays were named as positive rays or anode rays or as canal rays. Anode rays are not emitted from the anode but from a space between anode and cathode.

Chadwick in 1932 found the evidence for the production of neutron in given reaction.

Neutron is chargeless particle and have mass equal to proton. 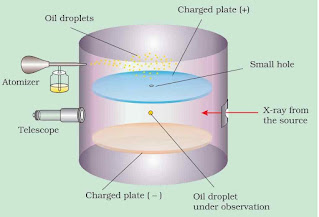 Thus oil droplets acquire negative charge. When sufficient amount of electric field is applied, the motion of the droplets can be accelerated, retarded or made stationary. Millikan observed that the smallest charge found on them was –1.6 × 10–19 coulomb and the magnitude of electrical charge, q on the droplets is always an integral multiple of the electrical charge ‘e’ i.e., q = ne

J.J. Thomson in 1898, proposed a model of atom which looked more or less like plum pudding or raisin pudding. He assumed atom to be a spherical body in which electrons are unevenly distributed in a sphere having positive charge which balance the electron’s charge. It is called Plum pudding model. 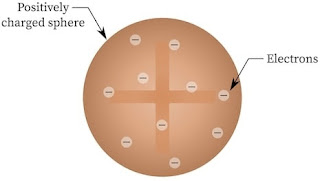 Important Feature of This Model : The mass of the atom is assumed to be uniformly distributed over whole atom.

Failure : This model was able to explain the overall neutrality of the atom, it could not satisfactorily, explain the results of scattering experiments carried out by Rutherford in 1911.

Rutherford in 1911, performed some scattering experiments in which he bombarded thin foils of metals like gold, silver, platinum or copper with a beam of fast moving a-particles. The thin gold foil had a circular fluorescent zinc sulphide screen around it. Whenever a-particles struck the screen, a tiny flash of light was produced at that point.

From these experiments, he made the following observations: 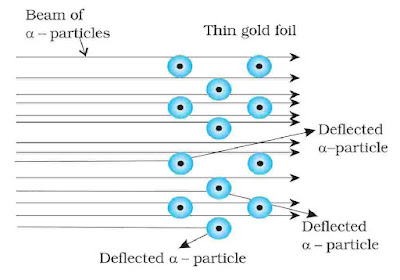 On the basis of these observation, he proposed a model.

Limitation : This model could not explain stability of atom. According to Maxwell's classic theory, an accelerated charged particle liberates energy. So, during revolution, it must radiate energy and by following the spiral path it should comes on nucleus.

It is equal to the sum of the positively charged protons (p) and electrically neutral neutrons (n). Mass number of an atom is designated by the letter ‘A’.

Note : The atom of an element X having mass number (A) and atomic number (Z) may be represented by a symbol ZXA.

Isobars are the atom with the same mass number but different atomic number, for example 6C14 and 7N14 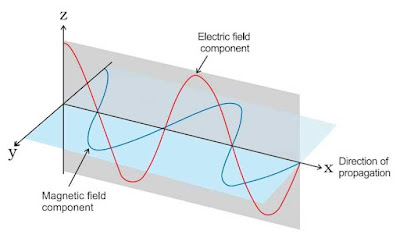 The main points of this theory are as follows:

Characteristics of a Wave

Wavelength (λ) : It is the distance between two consecutive crests or troughs and is denoted by λ.

Frequency (v) : It is the number of waves passing through a given point in one second. The unit frequency is hertz or cycle per second.

Velocity : Velocity of a wave is defined as the linear distance travelled by the wave in one second. It is represented by c and is expressed in m/sec.

Amplitude : Amplitude of a wave is the height of the crest or the depth of the through. It is represented by V and is expressed in the units of length.

Black-body is an ideal body which emits and absorbs radiations of all frequencies. The radiation emitted by these bodies is called black-body radiation. 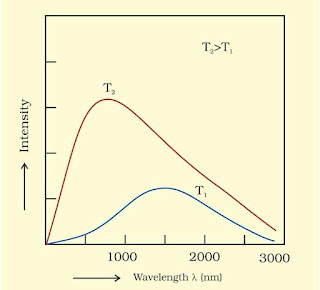 When light of a suitable frequency is allowed to incident on a metal, ejection of electrons take place. This phenomenon is known as photo electric effect. 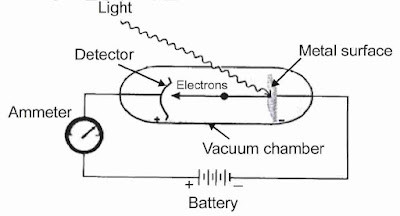 Einstein in (1905) was able to give an explanation of the different points of the photoelectric effect using Planck’s quantum theory as under:

K.E. of the ejected electron.

According to this theory, energy cannot be absorbed or released continuously but it is emitted or released in the form of small packets called quanta. In case of light this quanta is known as photon. This photon travels with speed of light. Energy of the photon is directly proportional to frequency.

Niels Bohr in 1913, proposed a new model of atom on the basis of Planck’s Quantum Theory. The main points of this model are as follows:

The most compelling evidence for the quantization of energy comes from spectroscopy. Spectrum word is taken from Latin word which means appearance. The record of the intensity transmitted or scattered by a molecule as a function of frequency or wavelength is called its spectrum.

When electric discharge is passed through hydrogen gas enclosed in discharge tube under low pressure and the emitted light is analysed by a spectroscope, the spectrum consists of a large number of lines which are grouped into different series. The complete spectrum is known as hydrogen spectrum.

On the basis of experimental observations, Johannes Rydberg noted that all series of lines in the hydrogen spectrum could be described by the following expression: 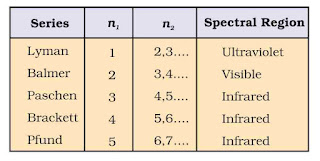 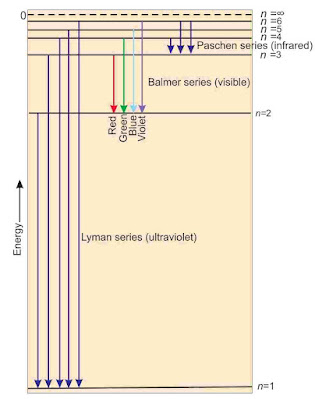 When spectral line (source) is placed in magnetic field, spectral lines split up into sublines. This is known as zeeman effect.

If splitting of spectral lines take place in electric field, then it is known as stark effect.

de Broglie in 1924, proposed that matter, like radiation, should also exhibit dual behaviour i.e., both particle like and wave like properties. This means that like photons, electrons also have momentum as well as wavelength.

Assume light have wave nature, then its energy should be given by Planck's theory

If it have particle nature, then its energy should be given by Einstein relation

On comparing equation (i) and (ii),

It states that, "It is impossible to measure simultaneously the exact position and exact momentum of a microscopic particle".

If uncertainty in position = Δx and

When both are measured simultaneously, According to this principle,

It identifies shell, determines sizes and energy of orbitals. It is indicated by ‘n’ and its values are 1, 2, 3, 4...

(i). Shapes of s-orbitals

s-orbital is present in the s-sub shell. For this sub shell, l = 0 and ml = 0. Thus, s-orbital with only one orientation has a spherical shape with uniform electron density along all the three axes. The probability of Is electron is found to be maximum near the nucleus and decreases with the increase in the distance from the nucleus. 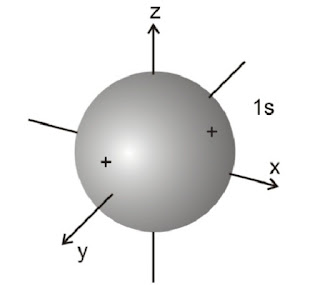 p-orbitals are present in the p-subshell for which l = 1 and ml can have three possible orientations –1, 0, +1. Thus, there are three orbitals in the p-subshell which are designated as px, py and pz orbitals depending upon the axis along which they are directed. The general shape of a p-orbital is dumb-bell consisting of two portions known as lobes. 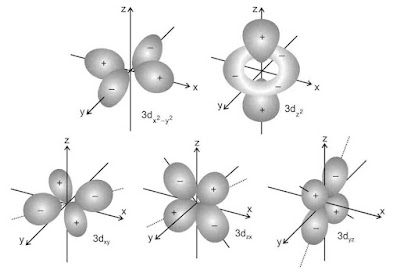 Distribution of electron in various orbitals is known as electronic configuration. The electrons filled in orbitals must obey the following rules -

According to this principle, orbitals with lowest energy are filled before the orbitals having higher energy. 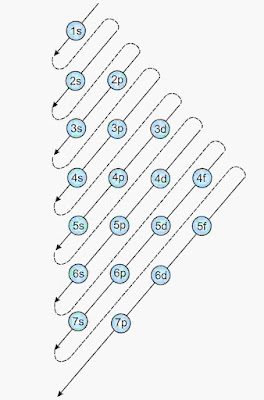 According to this, The orbital which has lower value of (n + l) is lower in energy.

According to this principle, in an atom, no two electrons have same value of all the four quantum numbers. In the same orbital, electron always accommodate in opposite spins. An orbital can have a maximum of two electrons, with opposite spin.

According to this rule, electrons are distributed among the orbital of a subshell in such a way so as to give the maximum number of unpaired electrons with a parallel spin. 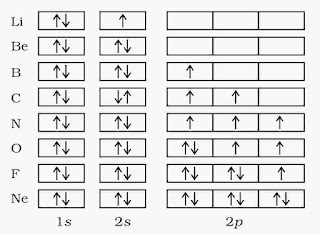