In the previous chapter, we have discussed about Structure of Atom Class but in this chapter, we shall study about Classification of Elements and Periodicity in Properties. Classification of elements was proposed in order to study all the elements in a systematic manner. In this Unit, we shall study the development of the Periodic Law and the Periodic Table. Mendeleev’s Periodic Table was based on atomic masses. Modern Periodic Table arranges the elements in the order of their atomic numbers in seven horizontal rows (periods) and eighteen vertical columns (groups or families).

Why Do We Need Classification?

Elements are the basic units of all types of matter. At present, 118 elements are known. With such a large number of elements, it is very difficult to study individually the chemistry of all these elements and their number of compounds. So to make the study of chemistry simpler, scientists searched for a systematic way to organise their knowledge by classifying the elements. Main aim behind this classification was to keep the elements of same properties together, so that by studying one element out of that group, we can have general idea about the properties of all the elements in that group.

Periodic table may be defined as the tabular arrangement of elements in such a way that the elements having same properties are kept together.

1st attempt towards the classification of elements was made by Johann W. Dobereiner in 1817. He arranged elements in the groups of three and in such a way that the atomic weight of middle element was equal or nearly equal to the average of atomic weights of other two elements.

Drawback : Only limited triads were arranged in this pattern.

“The physical and chemical properties of elements are a periodic function of atomic weights”.

Mendeleev arranged elements in horizontal rows and vertical columns of a table in order of their increasing atomic weights in such a way that the elements with similar properties occupied the same vertical column or group. Vertical Colums are called groups which are numbered I to VIII group, each group is further subdivided into sub groups A and B. Horizontal rows are called periods. 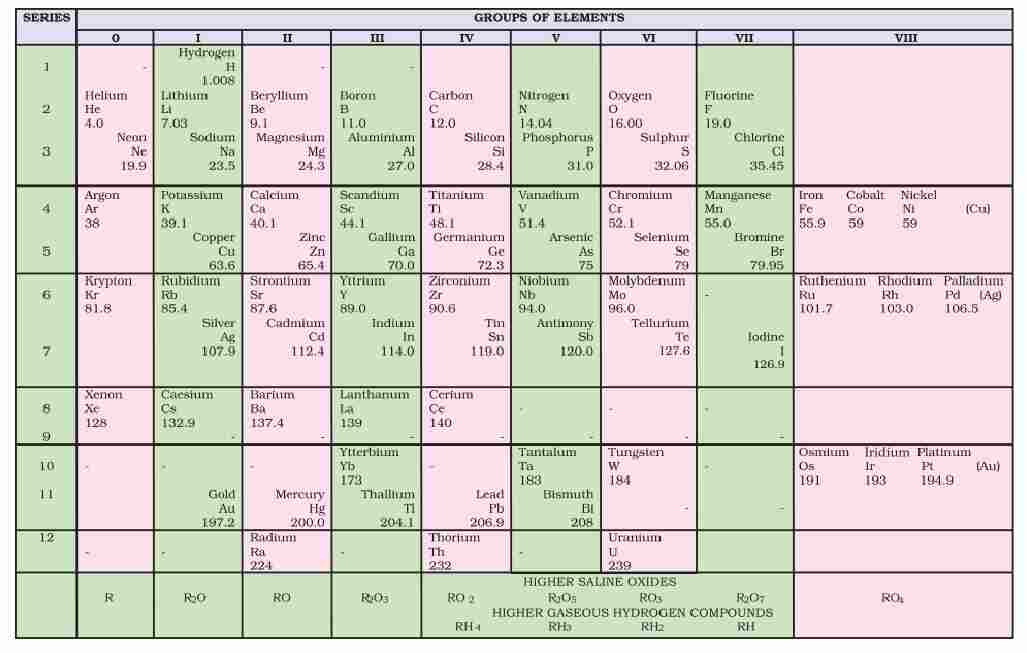 (ii) Position of isotope : Isotopes should be placed separately according to periodic law. But actually one place was given to all isotopes of an element.

(iii) Cause of periodicity : Mendeleev could not explain why elements exhibit a periodicity in their properties when arranged in the order of increasing atomic weight.

(iv) Anomalous pairs of elements : Some anomalous pairs were present in table. As Tellurium (128 u) comes in VI group before Iodine (127 u).

“The physical and chemical properties are the periodic function of their atomic numbers”.

The long form of periodic table, also called Modem Periodic Table, is based on Modern periodic law. In this table, the elements have been arranged in order of increasing atomic numbers.

A modern version, the so-called “long form” of the Periodic Table of the elements, is the most convenient and widely used. The horizontal rows are called periods and the vertical columns, groups. Elements having similar outer electronic configurations in their atoms are arranged in vertical columns, referred to as groups or families. According to the recommendation of International Union of Pure and Applied Chemistry (IUPAC), the groups are numbered from 1 to 18 replacing the older notation of groups IA … VIIA, VIII, IB … VIIB and 0.

There are altogether seven periods. The period number corresponds to the highest principal quantum number (n) of the elements in the period. The first period contains 2 elements. The subsequent periods consists of 8, 8, 18, 18 and 32 elements, respectively. The seventh period is incomplete and like the sixth period would have a theoretical maximum of 32 elements. In this form of the Periodic Table, 14 elements of both sixth and seventh periods (lanthanoids and actinoids, respectively) are placed in separate panels at the bottom. 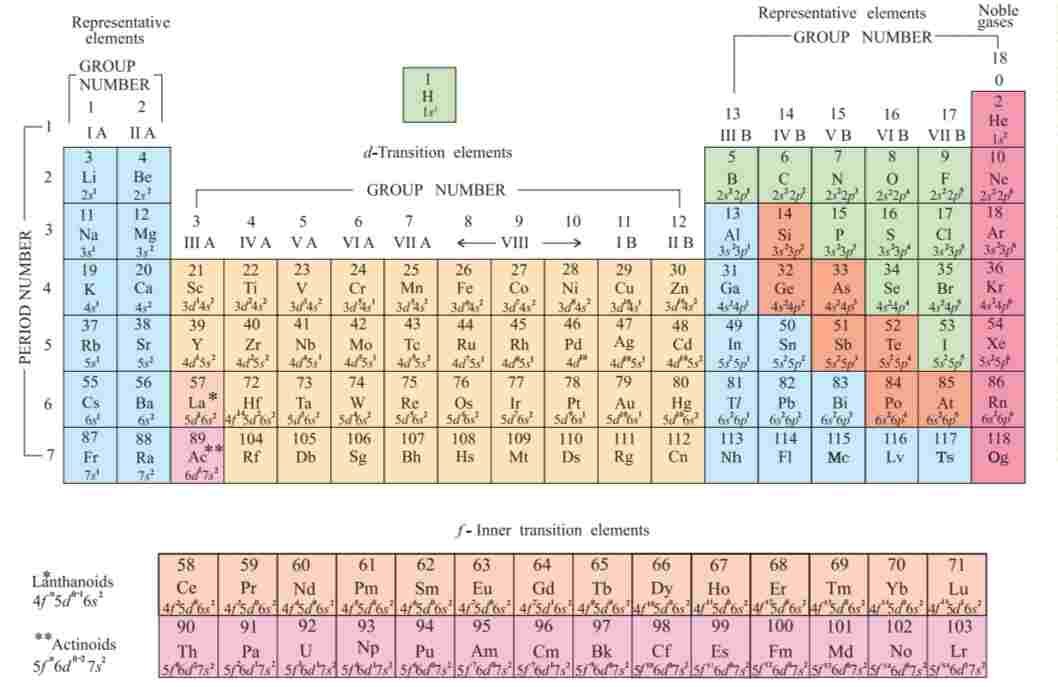 The IUPAC names are derived by using roots for three digit atomic number of the elements. 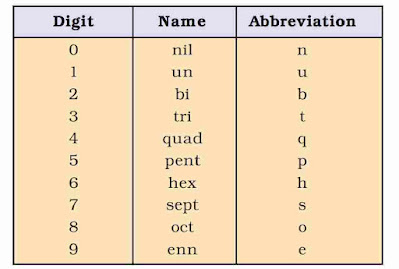 A systematic nomenclature be derived directly from the atomic number of the element using the numerical roots for 0 and numbers 1-9. The roots are put together in order of digits which make up the atomic number and “ium” is added at the end. The IUPAC names for elements with Z above 100 are shown below : 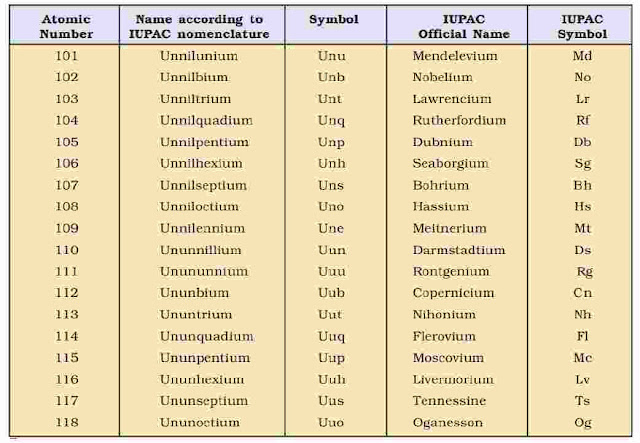 Division of Elements into Blocks

The elements of Group 1 (alkali metals) and Group 2 (alkaline earth metals) which have ns1 and ns2 outermost electronic configuration belong to the s-Block Elements.

The p-Block Elements comprise those belonging to Group 13 to 18 and these together with the s-Block Elements are called the Representative Elements or Main Group Elements. The outermost electronic configuration varies from ns2np1 to ns2np6 in each period.

These are the elements of Group 3 to 12 in the centre of the Periodic Table. These are characterised by the filling of inner d orbitals by electrons and are therefore referred to as d-Block Elements. These elements have the general outer electronic configuration (n-1)d1-10ns0-2.

The two rows of elements at the bottom of the Periodic Table, called the Lanthanoids, Ce(Z = 58) – Lu(Z = 71) and Actinoids, Th(Z=90) – Lr (Z=103) are characterised by the outer electronic configuration (n-2)f1-14(n-1)d0–1ns2. The last electron added to each element is filled in f-orbital. These two series of elements are hence called the Inner-Transition Elements (f-Block Elements).

The properties which generally have a regular trend along a group or period are called periodic properties. These are as given below :

Atomic Radius is the distance from the centre of the nucleus to the outermost shell containing electron.

The ionic radii can be estimated by measuring the distances between cations and anions in ionic crystals. In general, the ionic radii of elements exhibit the same trend as the atomic radii.

Cation: The removal of an electron from an atom results in the formation of a cation. The radius of cation is always smaller than that of the atom.

Anion: Gain of an electron leads to an anion. The radius of the anion is always larger than that ‘ of the atom.

It is the amount of energy required to remove the outer most electron from an isolated atom in its gaseous state. It is the measured in the unit of kJ/mole. It is denoted by (∆iH).

It is the enthalpy change when an electron is added to the gaseous neutral atom. Electron gain enthalpy provides a measure of the ease with which an atom adds an electron to form anion. It is the measured in the unit of kJ/mole. It is denoted by (∆egH).

Electronegativity is a measure of the tendency of an element to attract bonded electron pair towards itself in a covalently bonded molecule.

Periodic Trends in Chemical Properties along a Period

Variation in Chemical Properties along a a Group 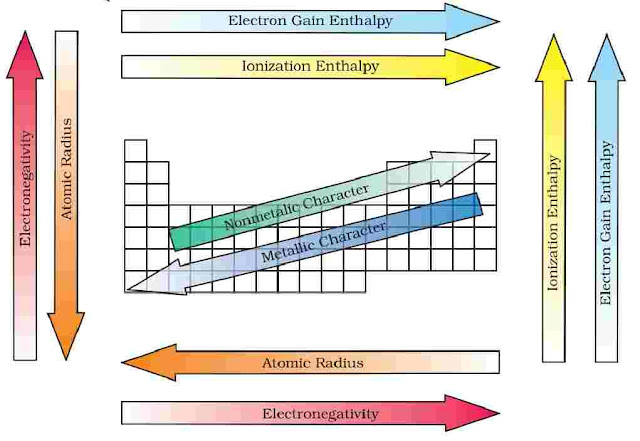