In the previous chapter we have discussed about The Classification of Elements and Periodicity in Properties but in this chapter we will study Chemical Bonding and Molecular Structure.

Structure and Bonding is the heart of chemistry. Chemical bond is very important to explain the properties and structure of compound. The important aspect of each type of force is its relative strength, how rapidly it decreases with increasing distance and whether it is directional in nature or not.

In order to explain the formation of a chemical bond in terms of electrons, Lewis postulated that atoms achieve stable octet when they are linked by a chemical bond. On the basis of this chemical bonds are following type :

It is proposed by Kossel and Lewis and according to this, "Every atom has a tendency to attain Noble gas electronic configuration or to have 8 valence electrons". This is known as law of octet rule or if it has two valence electrons then this is known as law of duplet. According to Lewis, only those compounds will be stable which follow octet rule.

Formal charge on an atom is the difference between the number of valence electrons is an isolated atom and the number of electrons assigned to that atom in a Lewis structure. It is expressed as:

Note : Electrovalency is the number of electrons lost or gained during the formation of an ionic bond or electrovalent bond.

A force which binds atoms of same or different elements by mutual sharing of electrons is called a covalent bond. If the combining atoms are same the covalent molecule is known as homoatomic. If they are different, they are known as heteroatomic molecule.

Valence bond theory was introduced by Heitler and London (1927) and developed by Pauling and others. It is based on the concept of atomic orbitals and the electronic configuration of the atoms. Let two hydrogen atoms A and B having their nuclei NA and NB and electrons present in them are eA and eB. As these two atoms come closer new attractive and repulsive forces begin to operate.

The covalent bonds can be classified into two different categories depending upon the type of overlapping. These are:

This type of covalent bond is formed by the axial overlapping of half-filled atomic orbitals. The atomic orbitals overlap along the internuclear axis and involve end to end or head on overlap. There can be three type of axial overlap among s and p-orbitals as discussed below:

(i) s-s overlap : In this case, there is overlap of two half-filled s-orbitals along the internuclear axis as shown below.

This type of covalent bond is formed when the atomic orbitals overlap in such a way that their axis remain parallel to each other and perpendicular to the internuclear axis. The orbitals formed due to sidewise overlapping consists of two saucer type charged clouds above and below the plane of the participating atoms. The electrons involved in the π bond formation are called pi-electrons.

There are many different types of hybridisation depending upon the type of orbitals involved in mixing such as sp3, sp2, sp, sp3d, sp3d2 etc.

Example of molecules having sp-hybridisation are BeF2, BeCl2, BeH2 etc. 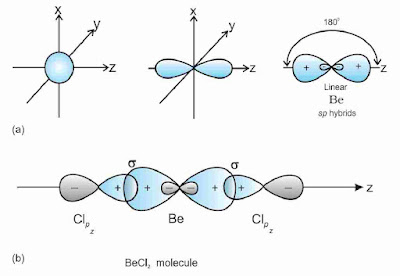 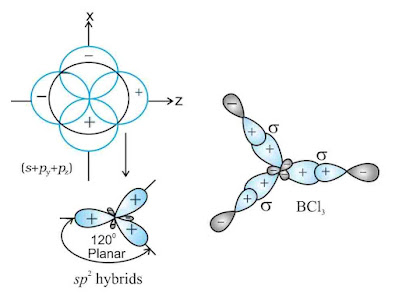 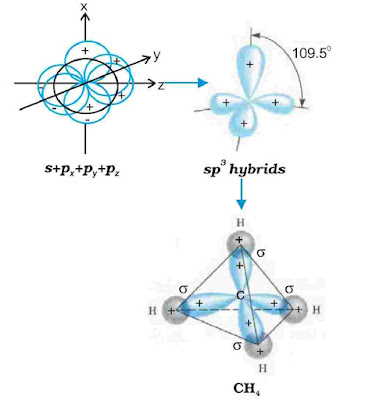 This type of hybridisation involves mixing of one s, three p and one d-orbitals to form five sp3d hybridised orbitals which adopt trigonal bipyramidal. 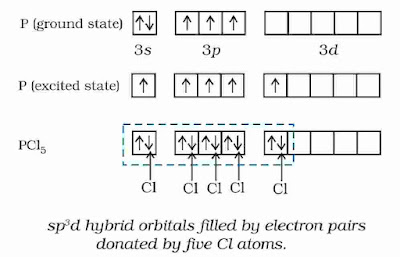 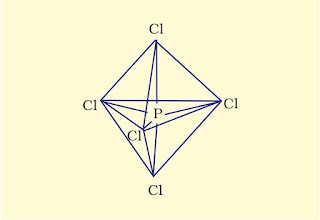 In this type of hybridisation one s, three p and two d-orbitals undergo intermixing to form six identical sp3d2 hybrid orbitals. These six orbitals are directed towards the corners of an octahedron and lie in space at an angle of 90° to one another. 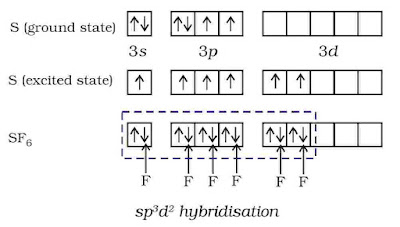 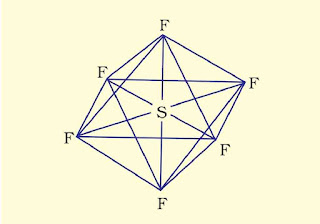 Sidgwick and Powell in 1940, proposed a simple theory based on repulsive character of electron pairs in the valence shell of the atoms. It was further developed by Nyholm and Gillespie (1957). Main Postulates are the following:

It is defined as the angle between the orbitals containing bonding electron pairs around the central atom in a molecule/complex ion. Bond angle is expressed in degree which can be experimentally determined by spectroscopic methods.

Bond length is defined as the equilibrium distance between the nuclei of two bonded atoms in a molecule. 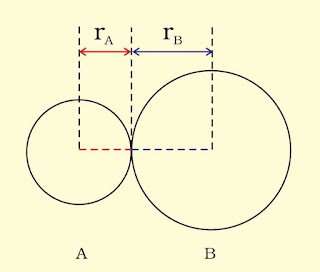 The Lattice Enthalpy of an ionic solid is defined as the energy required to completely separate one mole of a solid ionic compound into gaseous constituent ions. For example, the lattice enthalpy of NaCl is 788 kJ mol–1.

Bond order is defined as half of the difference between the number of electrons present in bonding and antibonding molecular orbitals. The bond order may be a whole number, a fraction or even zero. It may also be positive or negative.

It is defined as the amount of energy required to break one mole of bonds of a particular type between two atoms in a gaseous state. The unit of bond enthalpy is kJ mol–1. For example, the H – H bond enthalpy in hydrogen molecule is 435.8 kJ mol–1.

Molecular orbital (MO) theory was developed by F. Hund and R.S. Mulliken in 1932. According to MOT, a molecule is considered to be quite different from the constituent atoms. All the electrons belonging to the atoms constituting a molecule are considered to be moving along the entire molecule under the influence of all the nuclei. Thus, a molecule is supposed to have orbitals of varying energy levels, in same way as an atom. These orbitals are called molecular orbitals. 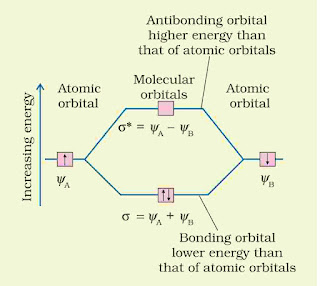 There are two types of hydrogen bonding. 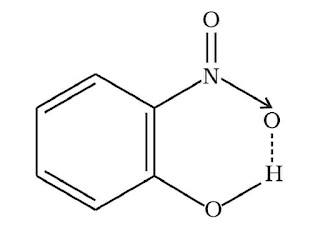 1. State : Hydrogen bonding may affect the state of a compound. For example, H2O is liquid at room temperature whereas H2S is gas. It is due to presence of intermolecular hydrogen bonding between H2O molecules, which is not present in H2S molecules.

2. Solubility : Only those covalent molecules are soluble in water which have tendency to form intermolecular hydrogen bonding with water molecules.

The force that binds a metal atom to a number of electrons within its sphere of influence is known as metallic bond. This model could easily explain the following properties of metals: