Gas is the state of matter in which molecules are always in random motion. Intermolecular interactions are extremely small (almost negligible) as compared to other states like solid and liquid. Gases are highly compressible state of matter and its state of diffusion is maximum. Gases have their own importance in living world. Air is a gaseous mixture of oxygen, nitrogen, CO2, Ar, etc.

Intermolecular forces are the forces of attraction and repulsion between interacting particles. This term does not include the electrostatic forces that exist between the two oppositely charged ions.

These are the weak forces of attraction between two molecules with or without any strong bond. These are electrostatic in nature. Types of van der Waal's forces are as follow : 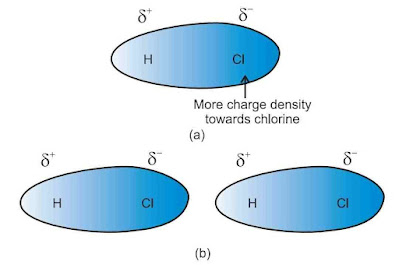 Dipole-dipole interaction energy is inversely proportional to the sixth power of the distance between the rotating polar molecules. 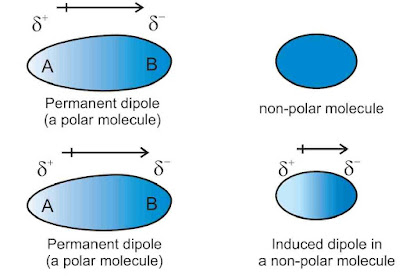 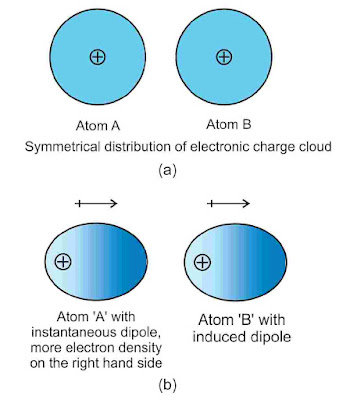 2. Pressure of a gas: According to laws of motion, pressure is defined as force applied per unit area of surface. It is denoted by P and SI unit of it is pascal (Pa). It is a scalar quantity.

According to this, "The volume of a given mass of gas is inversely proportional to pressure at constant temperature." This law is given by Robert Boyle.

If a fixed amount of gas at constant temperature T occupying volume V1 at pressure P1 undergoes expansion, so that volume becomes V2 and pressure becomes P2, then according to Boyle’s law :

According to this, "The volume of a given mass of gas is directly proportional to its absolute temperature at constant pressure." This law is given by Jacques Charles.

If a fixed amount of gas at constant pressure P occupying volume V1 at temperature T1 undergoes expansion, so that volume becomes V2 and temperature becomes T2, then according to Charle’s Law :

It states that at constant volume, the pressure of a fixed mass of a gas is directly proportional to the Kelvin temperature. The law may be expressed mathematically as

If a fixed amount of gas at constant volume V occupying pressure P1 at temperature T1 undergoes expansion, so that pressure becomes P2 and temperature becomes T2, then according to Gay Lussac’s Law :

According to this, “Equal volumes of all gases at same temperature and pressure contain equal numbers of molecules”.

On combining the Boyle’s law, Charles law and Avogadro’s law we get an equation known as ideal gas equation which correlate P, V, T of a gas.

`V\propto T` (according to Charle’s law at constant P)

Where R is proportionality constant known as universal gas constant.

If temperature, volume and pressure of a fixed amount of gas vary from T1, V1 and p1 to T2, V2 and p2 then we can write

This equation is also known as Combined gas law.

The postulates of kinetic theory of gases are as follows:

where P =Pressure of the gas

According to Graham’s Law “at constant pressure and temperature, the rate of diffusion or effusion of a gas is inversely proportional to the square root of its vapour density or molecular mass”.

Ideal gas : A gas which obeys the gas laws and the gas equation PV = nRT strictly at all temperatures and pressures is said to be an ideal gas. But actually the concept of ideal gas is hypothetical as there is no gas which practically is ideal. So, the non-ideal gases are the real gases which are the actually existing gases which obey gas equation approximately only under two conditions. (i) Low pressure (ii) High temperature.

There are two hypothetical postulates in the kinetic theory of gases. These are as follows

Where a and b are van der waal's constant.

Gases can be liquefied by applying high pressure or by cooling.

Critical Temperature : It is the temperature above which gas cannot be liquefied, no matter how high be pressure.

Critical Pressure : It is the minimum pressure that is required to liquefy a gas at critical temperature.

Critical Volume : It is the volume occupied by gas at critical temperature and critical pressure.

It is the intermediate state between gaseous and solid states. Liquids possess fluidity like gases but incompressibility like solids.

Properties of liquid are:

The process of change of liquid into vapour state at any given temperature is evaporation. Evaporation is accompanied by cooling as average kinetic energy of remaining molecules decreases. Example: Ether evaporates faster than alcohol.

In a closed vessel when the rate of evaporation become equal to rate of condensation, i.e. equilibrium is established, the pressure exerted by the vapours of liquid on its on surface is known as vapour pressure.

“It is the force acting on the surface at right angles to any line of unit length”. The property of surface tension may also be described in terms of the tendency of a liquid to decrease its surface area. It's SI unit is N/m. 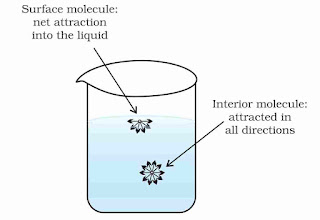 The property of the liquids which determines their resistance to flow, is called viscosity. The forces between the layers which oppose the relative motion between them are known as the forces of viscosity. Thus viscosity may be thought of as the internal function of a fluid in motion.

This force is proportional to the area of contact of layers and velocity gradient i.e.

η is the coefficient of viscosity. It is expressed in Nm–2s or poise

The reciprocal of the coefficient of viscosity is called Fluidity.