(i) System : A specific portion of universe under study which is seperated from rest of the universe with a boundary is called system.

(ii) Surroundings : Rest of the universe which might be in a position to exchange energy and matter with the system is known as surrounding.

(i) Open system : System can be open if it can exchange both energy and matter with surroundings.

(ii) Closed system : System can be closed if it can exchange energy but not matter with surroundings.

(iii) Isolated system : System can be isolated if it can neither exchange energy nor matter with surroundings.

The properties which depend upon mass of the substance is known as extensive properties i.e., mass, volume, internal energy, enthalpy etc.

The properties which are independent of mass of the substance is known as intensive properties i.e., temperature, pressure, density, refractive index.

Thermodynamic State of a System

A state is the condition of a system as specified by its physical properties. We can describe the state of a gas by quoting its pressure (p), volume (V), temperature (T), amount (n) etc. Variables like p, V, T are called state variables or state functions because their values depend only on the state of the system and not on how it is reached.

The thermodynamic parameters where value does not depend merely on initial and final state but depends upon the path followed is known as path funcition. i.e., heat (q), work done (W).

(a) Isothermal process: It is the process in which temperature is kept constant means temperature of initial and final state of system along with entire path of process is same.

(b) Isobaric process: It is the process in which pressure is kept constant for entire process.

(c) Isochoric process: It is the process in which volume is kept constant.

(d) Adiabatic process: The process in which heat transaction across boundary is not allowed.

(e) Reversible process and Irreversible process: In thermodynamics, a process is said to be reversible when energy change in each step of the process can be reversed by changing the variables such as pressure, volume or temperature acting on them. In such a process, the driving and opposing forces differ infinitesimally and the process can be reversed completely by increasing the opposing force by an infinitesimally small amount.

(f) Cyclic process: It is the process which run in close loop means process in which initial and final states are identical. 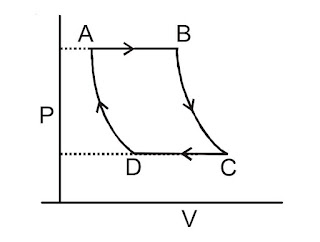 Every substance is associated with definite amount of energy that is called internal energy. It is an extensive property and a state function. Internal energy of ideal gases is a function of temperature only.

It is the work done when the gas expands or contracts against the external pressure. Consider a cylinder containing one mole of an ideal gas fitted with a frictionless and weightless piston having an area of cross-section A. The total volume of the gas is Vi and the initial pressure of the gas inside P. 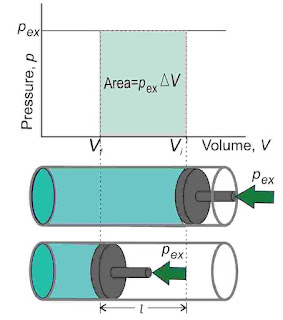 Let the external pressure acting on the piston is pex. If the external pressure Pex is slightly greater than P piston moves downward till the pressure inside the cylinder becomes equal to Pex. Let this change be achieved in a single step and the final volume be Vf. During this compression, suppose the piston moves a very small distance Δl. Thus, the work done on the gas is given by,

The change in internal energy of a system can be brought about by the transfer of heat from the surroundings to the system or vice-versa. This exchange of energy between the system and surroundings is possible as a result of the temperature difference between them. This energy called heat is represented by Q.

First law of thermodynamics states the law of conservation of energy in a different manner. According to this law, whenever a quantity of one kind of energy disappears an equivalent amount of energy appears in some other form.

According to first law of thermodynamics,

The total heat content of a system at constant pressure is known as its enthalpy. Mathematically it is the sum of internal energy and pressure-volume energy

It is an extensive property and a state function. Increase in enthalpy H is equal to heat absorbed at constant pressure.

Heat capacity is amount of heat require to raise the temperature of a system by unity. It is represented as "C". It is an extensive property and temperature dependent.

(i) Specific heat: For 1 gram system the heat loose or gained by system to bring one unit change in temperature is called specific heat denoted by 's'. specific heat is the intensive property.

(ii) Molar heat capacity: It is heat capacity for a system having 1 mole of material. It is represented as Cm. It is an intensive property.

Relation between Cp and Cv

As per ideal gas equation

According to Hess's law, If a reaction takes place in several steps then its standard reaction enthalpy is the sum of the standard enthalpies of the intermediate reactions into which the overall reaction may be divided at the same temperature.

According to Hess's law,

The energy required to break one mole bond of a particular type in gaseous molecule is known as bond dissociation energy. For example, we consider the dissociation of water,

Entropy is a measure of degree of randomness or disorder in a system. Entropy is an extensive property and a state function.. Its value depends upon the amount of substance present in the system.

This states that the entropy of the universe always increases in every spontaneous (natural) change.

Gibb's free energy is defined as,

H is enthalpy, S is entropy and T is the temperature on Kelvin scale.