It is the state of system at which temperature, pressure, volume and composition have fixed value and does not vary with time. Chemical Reactions can be divided into two categories:

1. Irreversible Reactions: The reactions which proceed to completion and the products fail to recombine to give back reactants. For example

2. Reversible Reactions: The reactions which never go to completion and products recombine to give back reactants. For example

We know that solid, liquid and gas are the three states of substance. Therefore, three types of physical equilibrium are possible. These are

Here the sign double half arrows ( ⇌ ) pointing in the opposite directions is both for the reversible change as well as for the equilibrium state.

Rate of melting of ice = Rate of freezing of water

The temperature at which the solid and liquid states of a pure substance are in equilibrium at the atmospheric pressure is called the normal freezing point or melting point of that substance.

In such type of equilibrium,

3. Solid(s) – gas(g) equilibrium: Such type of equilibrium is attained in case of volatile solids.

Example : If solid iodine is placed in a closed vessel, violet vapours starts appearing in the vessel. The intensity of violet vapour increases with time and ultimately it becomes constant.

Rate of sublimation = Rate of condensation

Suppose sugar is added continuously into a fixed volume of water at room temperature and stirred thoroughly with a glass rod. First the sugar will keep on dissolving but then a stage will come when no more sugar dissolves. Instead it settles down at the bottom. The solution is now said to be saturated and in a state of equilibrium. In this state

Rate of dissolution = Rate of precipitation 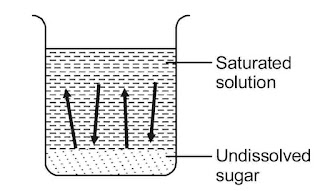 The amount of the solid in grams that dissolves in 100 g of the solvent to form a saturated solution at a particular temperature is called the solubility of that solid in the given solvent at that temperature.

Such type of equilibrium is present in soda water bottle in which CO2 gas is dissolved in water under high pressure. There is a state of dynamic equilibrium between the CO2 present in the solution and the vapours of the gas above the liquid surface at a given temperature.

It states that, The mass of gas that dissolved in a given mass of a solvent at any temperature is proportional to the pressure of the gas above the surface of the solvent.

where k is Henry’s constant and its value depends upon the nature of the gas, nature of liquid and temperature.

(i). Law of Chemical Equilibrium

This law states that the rate of an elementary reaction is proportional to the product of the concentration of the reactants. At a constant temperature, the rate of a chemical reaction is directly proportional to the product of the molar concentrations of the reactants each raised to a power equal to the corresponding stoichiometric coefficients as represented by the balanced chemical equation. Let us consider the reaction,

For a general reversible reaction

(iii). Relation between Kp and Kc

For a general reversible reaction

Where, Δn = difference of stoichiometric coefficients of gaseous products and reactants.

2. Change in Temperature: According to Le-Chatelier’s principle if the temperature of an equilibrium system is increased, the equilibrium will move in the direction of the added heat.

3. Change in Pressure: The pressure has no effect on the equilibrium if the number of moles of gaseous reactants and products does not change. The change in pressure in both liquids and solids can be neglected in heterogeneous chemical equilibrium.

3. Change in Volume: When the volume of a gaseous mixture at equilibrium is increased, the equilibrium moves in the direction of a larger number of gaseous molecules.

4. Effect of a Catalyst: The equilibrium is unaffected by the catalyst. This is due to the fact that the catalyst favours both forward and backward reactions equally.

When in an equilibrium reaction, all the reactants and the products are present in the same phase (i.e., gaseous or liquid) it is called a homogeneous equilibrium. For example,

When in an equilibrium reaction, the reactants and the products are present in two or more than two phases, it is called a heterogeneous equilibrium.

The equilibrium between water vapour and liquid water in a closed container is an example of heterogeneous equilibrium.

It states that if a stress is applied to a system in equilibrium, the equilibrium for the time being gets disturbed. As a result system moves in a direction which tends to relieve the external stress and finally a new equilibrium is attained.

Electrolytes are the substances which conduct electricity in molten state or in solution. Example HCl, NaCl, KCl, CH3COOH etc.

When an electrolyte is dissolved in a solvent it spontaneously dissociates into oppositely charged particles called ions, to a considerable extent. Electrolytic ionization or dissociation gives ions and unionized molecules in solution. For neutrality, the total charge on cations is equal to the total charge on the anions.

It is the fraction of one mole of the electrolyte that has dissociated under the given conditions. The value of α depends on temperature, dilution of electrolyte, nature of electrolyte and solvent.

According to this law, "The degree of ionization (or dissociation) of any weak electrolyte is inversely proportional to the square root of concentration."

Concepts of Acids and Bases

Base: Any substance when dissolved in water, increases the concentration of OH-. e.g., NaOH, KOH etc.

Acid: Species (Molecule or ion) that donates a proton to another species.

Base: Species (Molecule or ion) that accepts a proton from another species.

An acid base reaction is the sharing of an electron pair with an acid by a base. This process is simply defined as coordination or neutralisation.

1. A strong acid is an acid that ionizes completely in water.

2. A weak acid is an acid that is only partially ionized in water.

3. A strong base is a base that ionizes completely in water.

4. A weak base is a base which is partially ionized in water.

pH of solution may be defined as negative logarithm of hydronium ion concentration.

For example: Ionisation of acetic acid (CH3COOH) and effect of addition of a small amount of acetate ion

A buffer solution is that solution which resists any change in its pH value on addition of small amount of acid or base. Although the pH of buffer changes on doing so, but the change in pH value will be less than the expected change. There are three types of buffer solution.

This consists of solution of a weak acid and its salt with strong base. Example; CH3COOH and CH3COONa.

This consists of solution of weak base and its salt with strong acid. e.g., NH4OH and NH4Cl

It is a solution of salt which itself can act as a buffer. Such a salt is the salt of weak acid and weak base. For example,

It is the number of moles of acid or base required by one litre of a buffer solution for changing its pH by one unit.

Buffer Capacity = No. of moles of acid or base adder per litre / Change in pH

The number of moles of solute in one litre of a saturated solution (mole / L) is defined as solubility. Let us calculate solubility of salt AgCl.