In this chapter, you will be able to learn about the terms : Coordination entity, central atom/ion, ligand, coordination number, types of complexes etc. You will also learn about IUPAC nomenclature of coordination compounds, theories of bonding in terms of Werner’s theory, valence bond theory and crystal field theory.

Compounds made up of two or more stable compounds by crystallization in a fixed stoichiometric ratio are called addition compound. For example

Addition compounds are of two types :

(i) Those which lose their identity in solution (double salt)

It constitutes a central metal atom or ion bonded to a fixed number of ions or molecules with coordinate bonds. For example, in coordination sphere (entity) of [CoCl3(NH3)3], cobalt ion (Co3+) is surrounded by three ammonia molecules and three chloride ions.

In coordination entity, the atom/ion to which a fixed number of ions/groups are attached in a definite geometrical arrangement around it, is called central atom/ion. For example, in K2[PtCl6], Pt+4 is central metal ion. Central metal atom or ion accepts lone pairs from the ligands hence it acts as Lewis acid.

The donor atoms, molecules or anions which donate a pair of electrons to the metal atom/ion are called ligands. Hence ligands are Lewis bases. For example, in [Ni(NH3)6]Cl2, NH3 is ligand (Lewis base).

It may be defined as number of coordinate bonds formed with central atom/ion by the ligands. For example in coordination entity [Ag(CN)2]–,[Cu(NH3)4]2+ and [Cr(H2O)6]3+, the coordination number of Ag, Cu and Cr are 2, 4 and 6 respectively.

Oxidation number of the central metal atom/ion in a complex is the charge present on it if all the ligands are removed along with the electron pairs that are shared with central atom. It is represented by Roman numerals in parenthesis after the name of central atom. For example, oxidation number of Co, Fe and Ni in [Co(NH3)6]3+, [Fe(CN)6]4– and [Ni(CO)4] is +3, +2 and 0, and written as Co(III), Fe(II) and Ni(0) respectively.

1. On the Basis of Charge on Ligands

2. On the Basis of Denticity 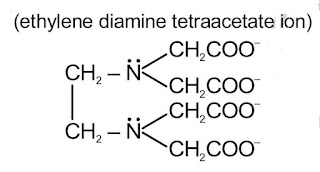 It can bind through two N and four O atoms to a central atom.

(iv) Ambidentate: Ligands which can bind through two different atoms (only one at a time) to form coordinate bond, e.g., NO2-, SCN- etc.

(v) Flexidentate: Ligands having variable denticity, which depends upon nature of metal ion. For e.g., EDTA having denticity 4 or 6.

3. On the Basis of Type of Donation of Lone Pair

(ii) σ-donor π-acceptor: Ligands that donate lone pair to central atom/ion by making σ-bond and accept appreciable amount of electron density from metal atom/ion into its vacant π or π* orbital, e.g., CO, NO etc. (these are also called π-acid ligands). 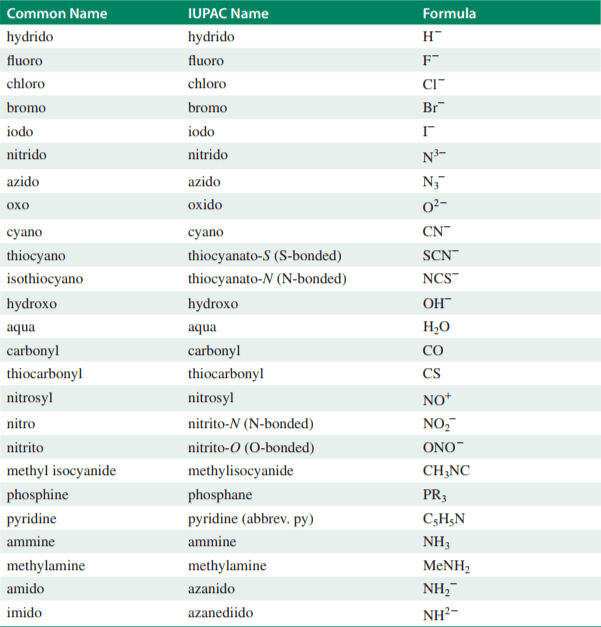 Coordination compounds are formulated and named according to the system set up by IUPAC (International Union of Pure and Applied Chemistry). It is important for writing systematic names and formulas, particularly when dealing with isomers.

It is very convenient to get information about constitution of a compound if we know the formula, mononuclear entities contain a single central atom. To write the formula, following rules are applied:

Following rules are applied for naming of coordination compounds:

The following examples will make the rules more clear:

Effective atomic number (EAN) of metal in a complex is given by:

According to this theory, the metal atom or ion can use (n–1)d, ns, np, nd orbitals for hybridisation under the influence of ligands to yield a set of equivalent orbitals of definite geometry such as square planar, tetrahedral, octahedral and so on. These hybrid orbitals and ligand orbitals are allowed to overlap with each other that latter can donate electron pair for bonding.

The following limitations of VBT are :

(i) Crystal field splitting in octahedral coordination entities Six ligands are surrounded to metal atom/ion. Since eg orbitals are more directional towards orbitals, they experience greater repulsion and their energy is higher. t2g orbitals lie away from ligands, hence they have lesser repulsion and lower energy. 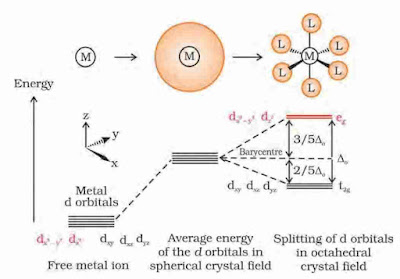 (ii) Crystal field splitting in tetrahedral coordination entities Coordination number and number of ligands = 4. t2g set have higher energy than eg set as t2g orbitals are more closer to the direction of approach of ligands. 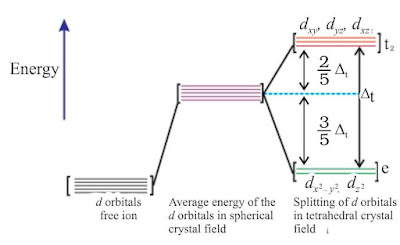 Importance and Application of Coordination Compounds