This chapter includes knowledge about the study of various types of solids and different types of forces responsible to bind the particles together, arrangement of unit cells in lattice and packing of lattice points, and Calculation of density of unit cell and unit cell dimensions.

Calculation of packing efficiency of solids, Types of voids, their locations and number of voids in different types of arrangements, Imperfections or common defects in solid-state, and Electrical and magnetic properties of solids are also included in this chapter.

A solid-state is characterised by its lowest compressibility and highest density as compared to a liquid and gaseous state. Constituent particles are packed most closely. This state is distinguished from liquids and gases by their definite size, shape and volume. Solids have considerable mechanical strength, rigidity, very strong inter-particle force of attraction and minimum distance among them.

Due to the strong forces of attraction particles in solid-state do not possess any translatory motion but can only have a vibrational motion about their mean position. Solids have negligible fluidity as compared to liquids and gases. The diffusion of particles of a solid-state is negligible.

Solids are classified on the basis of two different parameters i.e.,

Classification on the basis of packing

These are the solids in which the constituent particles (atoms, ions or molecules) are arranged in a regular, three-dimensional orderly arrangement, which gets repeated throughout. Hence, these are also called long-range order solids. Quartz, diamond, Boron Nitride, NaCl, ZnS, CsCl etc.

Constituent particles are randomly scattered with, no regular arrangement of particles. Therefore they do not have any definite shape or form. Rubber, glass, plastic etc. are commonly known as amorphous solids.

Classification on the basis of Nature of Intermolecular Forces

There is a regular arrangement of positively and negatively charged ions throughout the solid where ions are held together by strong coulombic or electrostatic forces. These solids are very hard and brittle and have very high melting points. In solid-state, ions are not free to move, hence they are insulators but in a molten state or in the aqueous state, their ions become free to move and become a conductor. Ionic solids have high enthalpies of vaporisation. Ex- LiF, NaCl, KNO3, MgO, etc.

Metallic crystals may be hard as well as soft having moderate enthalpies of fusion. A Mobile sea of electrons is responsible for many properties of metals such as malleability (can be beaten into thin sheets), ductility (can be drawn into wires), metallic lustre, thermal conductivity and electrical conductivity etc. Ex- Copper, Iron, Nickel etc.

These atoms are bonded together by covalent bond formation throughout the crystal. It means there is a continuous network of covalent bonds forming a giant three-dimensional structure or giant molecule. Covalent bonds are strong and directional in nature. These solids are very hard, brittle and very high melting point. Due to the absence of any free electrons or ions, they are insulators. Their enthalpies of fusion are very high. Ex- Diamond, Graphite, Boron Nitride, Silicon Carbide (SiC) etc.

Their molecules are held together by dispersion forces, London forces, dipole-dipole forces or hydrogen bonds. Either atoms or molecules are bonded together by weak dispersion forces or London forces. These are non-conductor soft solids with low m.p. and low enthalpies of vaporisation. They are volatile in nature hence, at room temperature and pressure they are available in a liquid or gaseous state. Ex- Iodine, Solid H2 and CO2 (dry ice). Naphthalene, Camphor etc. 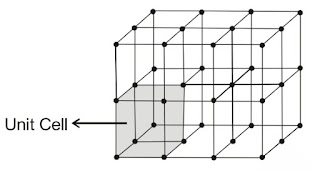 Crystal lattices have the following characteristics

The smallest repeating unit in space lattice when repeated over and over again in different directions produces a complete crystal lattice. There are two important parameters of a unit cell. 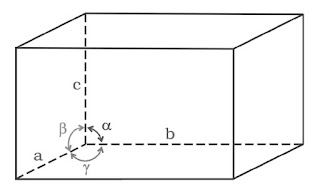 When constituent particles are present only in the corner positions of a unit cell, it is called the primitive unit cell. 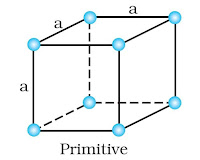 When a unit cell contains one or more constituent particles present at positions other than corners in addition to those at corners, it is called a centred unit cell. Centred unit cells are of three types:

(i) Body-Centred Unit Cells: Such a unit cell contains one constituent particle (atom, molecule or ion) at its body centre beside the ones that are at its corners. 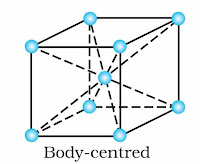 (ii) Face-Centred Unit Cells: Such a unit cell contains one constituent particle present at the centre of each face, besides the ones that are at its corners. 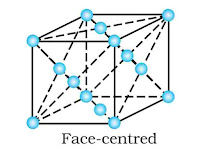 (iii) End-Centred Unit Cells: In such a unit cell, one constituent particle is present at the centre of any two opposite faces besides the ones present at its corners. 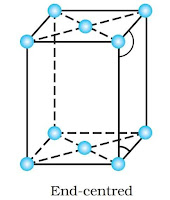 Number of Atoms in a Unit Cell

A crystal system is made up of a very large number of unit cells and every lattice point is occupied by one constituent particle i.e., atom, ion or molecule. These particles may be at corners, face-centres and body centres in different unit cells. Each unit cell is adjacent to another unit cell. Most of the atoms are shared by neighbouring unit cells.

In order to calculate the number of points in a unit cell following generalisations can be used.

By using this information, let us calculate the number of constituents or atoms per unit cell.

In this cell, particles are present only at 8 corners and an atom from each corner contributes `1/8` th.

It has 8 points at the 8 corners and one point at the body–centre of the cube.

There are 8 points at the corners and 6 points at 6 face centres of each unit cell.

(a) Close packing in one Dimension: Arrangement of different atoms in a row touching each other forms one dimension or edge. The coordination number is 2.

(b) Close packing in two-Dimensions: The rows of particles can be stacked in two ways: 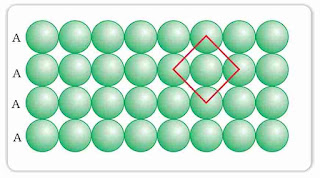 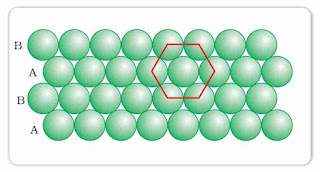 (c) Close Packing in three Dimensions: When layers are arranged over each other they form three-dimensional packing. It is layer packing in which the second layer is placed over the first layer in such a way that all the spheres are exactly above each other and all the spheres align horizontally as well as vertically. This arrangement forms AAA ........ type of lattice. It forms a simple cubic lattice and its unit cell is a primitive cubic unit cell. 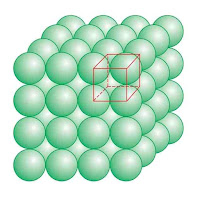 Octahedral voids are holes surrounded by six spheres located on a regular tetrahedron. The coordination number of the octahedral void is 6. 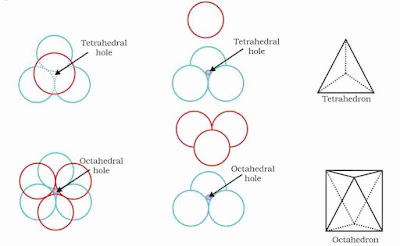 In all the types of packings, there is always some free space in the form of voids or vacant spaces. Packing efficiency is the percentage of total space filled by the particles.

(i). Packing efficiency in fcc or ccp structures 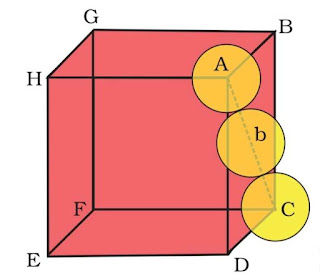 And radius of sphere = r

As there are total 4 lattice points per unit cell. 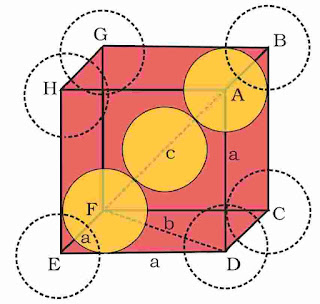 Suppose the edge length = a

Radius of each sphere = r 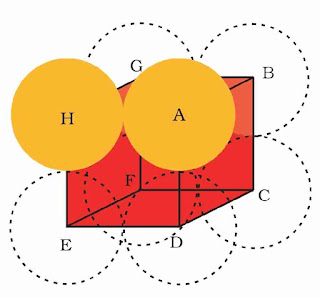 Let the edge length of the unit cell = a

The radius of sphere = r

As two spheres touch each other at an edge

Here Z is the number of atoms present in one unit cell and m is the mass of a single atom.

Irregularities in the arrangement of constituent particles in the crystalline state are called imperfections or defects. Generally, defects arise during crystallisation processes at a fast or moderate rate.

When some of the lattice sites are vacant, the crystal is said to have vacancy defects, which results in a decrease in the density of the substance. This defect can also develop when a substance is heated.

When some constituent particles (atoms or molecules) occupy an interstitial site, the crystal is said to have an interstitial defect. This defect increases the density of the substance. Such types of defects can be shown by non-ionic solids. Ionic solids must always maintain electrical neutrality, to show Frenkel defects and Schottky defects.

In ionic solids, some cations and a proportionate number of anions are missing from the lattice. While doing so electrical neutrality of the solid is not disturbed. It is termed a Schottky defect. The solids having comparable cationic and anionic radii where the Coordination number is high, generally show this defect. Highly ionic substances such as NaCl, KCl, CsCl, CsBr etc. show this defect. Due to this defect density and stability of the solid decrease while its electrical conductivity increases. 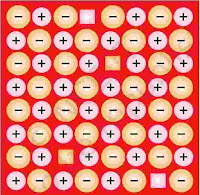 In some ionic solids smaller ions usually, cations are dislocated from their normal site to some interstitial site. It is termed a Frenkel defect. Ionic substances having large size variation between cation and anion and low Co-ordination numbers generally show this defect e.g., ZnS, AgCl, AgBr, AgI etc. 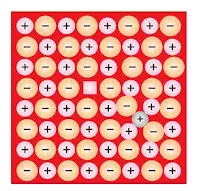 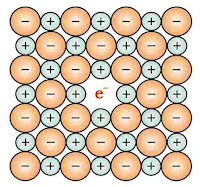 On the basis of conductivity, solids are classified as conductors, semiconductors and insulators.

The atomic orbitals of metal atoms form molecular orbitals which together form a band. The outermost filled energy band is the valence band and the next empty band in which electrons can move is called the conduction band.

The conductivity of Intrinsic semiconductors is very low which can be increased by adding the appropriate amount of suitable impurity to it. This is called doping. It means when some impurity is added to Si or Ge they can be converted to semiconductors. This doping may be of two types. 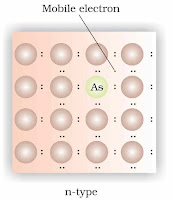 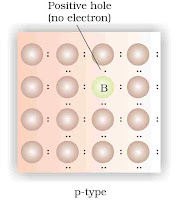 Magnetic properties of materials are due to magnetic moments associated with the individual electron. The magnetic moment of each electron may originate from any of the two types of motion.