In this chapter, we will discuss about rate of a reaction and outlines the basic concepts in terms of order and molecularity of reactions. This is followed by the rate laws. Then we will discuss integrated rate equations which includes kinetics of zero and first order reactions with their characteristics half-life and parallel reactions. Finally we will see the kinetics of nuclear reactions including their types, radioactive decay and carbon-dating.

Chemical kinetics is the branch of chemistry that deals with rate of a reaction, factors affecting the rate and the reaction mechanism. Once a reaction starts, how fast and how far it will go. Ionic reactions in solution such as that between HCl (aqueous) and AgNO3 (aqueous) giving a white precipitate of AgCl take place within twinkling of eye. Hence, chemical kinetics helps us to describe reaction rates and examine how they are affected by catalyst, concentration and temperature.

For a reaction, A ⟶ B

It states that the rate of a chemical reaction is proportional to the product of the active masses of the reacting substances, raised to the power, equal to the respective number of their molecules taking part in a reaction as represented by the balanced chemical equation. 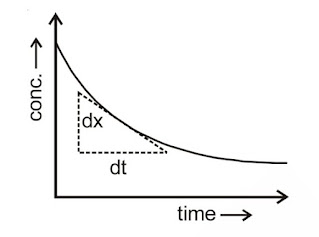 The theoretical rate of a reaction is given by rate law. Thus, for the general chemical change, mA + nB ⟶ Products

Here, [A] = active mass of substance A

Rate of reaction depends upon the experimental conditions such as concentration of reactants (pressure in case of gases), temperature and catalyst.

i). Concentration of Reactant

ii). Nature of Reactant and Product

Rates of certain reactions increase by absorption of photons of a particular radiation. Such reactions are called photochemical reactions. For example, photosynthesis in plants; formation of ozone in the stratosphere.

For most of the reactions, the rate of reaction increases two to three times, with every 10°C rise in temperature. This rate of increase factor is known as temperature coefficient.

v). Presence of a Catalyst

Generally, a positive catalyst enhances the rate of a reaction by decreasing the activation energy, but negative catalyst retards a chemical reaction.

The rate of a reaction increases with increasing surface area of solid reactant, i.e.,

i.e.,Wood shavings burn more rapidly than a log of wood of same mass. Coal dust burns at a faster rate than a large piece of coal.

i). Order of Reaction

The sum of powers of the concentration of the reactants in the rate law expression is called the order of that chemical reaction. It can be fraction, zero or any whole number.

By the equation of rate law,

Order of a reaction can be 0, 1, 2, 3 and even a fraction. A zero order reaction means that the rate of reaction is independent of the concentration of reactants.

Those reactions in which rate of reaction does not change with concentration of the reactants.

For a general reaction,

Rate law for such a reaction is expressed as.

A reaction is said to be first order if its reaction rate is determined by the variation of one concentration term only. Rate law for such a reaction is expressed as.

The reaction in which sum of powers of concentration terms in rate law equation is two. Rate law for such a reaction is expressed as.

ii). Molecularity of a Reaction

Modularity of reaction is defined as the number of reacting particles (atoms or molecules or any other species), which collides simultaneously to bring about the chemical change. It is a theoretical concept. Its value is always a whole number. It is never more than three. It cannot be zero.

For example, order of reaction and molecularity of electrolysis of water of Ethyl Acetate is given by

The reaction whose rate does not depend upon the concentration of reactants is called a zero order reaction.

A ⟶ B is a zero order reaction, then

If a general reaction A ⟶ B follows first order kinetics, then its rate law is,

The time in which half of the initial amount of reactants is converted to products or the time taken for 50% completion of reaction is known as half life period.

The number of collisions per second per unit volume of the reaction mixture is called collision frequency (z).

The molecules which have sufficient energy and proper orientation collide to give product, such collisions are called effective collisions.

The actual dependence of rate constant on temperature is represented by the Arrhenius equation:

k/A is defined as the fraction of molecules undergoing effective collisions per unit time.

C14 dating is based on the fundamental assumption that intensity of cosmic rays and hence of C14 in the atmosphere has been constant over thousands of years. This gives the initial activity of C14 corresponding to the time when a plant or an animal died and further assimilation of radiocarbon ceased.

time period can be calculated by