In this chapter, we will start with the interfacial phenomenon and its significance. We will define adsorption and its classification and explain of its mechanism, with adsorption isotherms. We will also discuss the catalysis, types of catalysis and catalysts and also describe the theories of catalysis. Thereafter we will enumerate the nature of colloidal state, describe its preparation, properties and purification of colloids.

Surface chemistry is the branch of chemistry that deals with the study of phenomenon occurring at the surface or interface, i.e., at the boundary separating two bulk phases.

The phenomenon of attracting and retaining the molecules of a substance by a solid (or a liquid) on its surface resulting into a higher concentration of the molecules on the surface is known as adsorption. Ex- Water vapours are absorbed by the y silica gel, Ammonia is adsorbed by charcoal.

The solid on whose surface molecules of gas, vapour or solute are adsorbed is known as adsorbent.

The gas or solute which is adsorbed on the surface of solid is called adsorbate.

The phenomenon in which a substance is uniformly distributed throughout the body of a solid or a liquid is known as absorption. Ex- Water vapours are absorbed by the anhydrous calcium chloride.

When both adsorption and absorption process takes place such that concentration of adsorbate is not same on the surface and in bulk, then common term sorption is used.

The process in which adsorbate is removed from the adsorbent is known as desorption.

Adsorption can be classified in two ways :

Adsorption is an exothermic process. According to Le Chatelier’s principle, adsorption increases with decrease in temperature.

With increase in pressure, adsorption also increases. This can be explained on the basis of Le Chatelier’s principle.

Here, `x/m` is the amount of adsorbate adsorbed per gram adsorbent.

(iii). Nature of adsorbate and adsorben

The Substances, which alter the rate of a chemical reaction and themselves remaining chemically and quantitatively unchanged after the reaction is called catalyst.

Both the reactants and the catalyst are in the same phase.

The catalytic process in which the reactants and the catalyst are in different phases is known as heterogeneous catalyst.

Ex- Combination between dinitrogen and dihydrogen to form ammonia in the presence of finely divided iron in Haber’s process.

The reactants are in gaseous state while the catalyst in the solid state.

When the reaction influences the rate of other reaction, which does not occur under ordinary conditions, it acts as induced catalyst and the phenomenon is induced catalysts. Ex- If oxalic acid is added to a mixture of KMnO4 and HgCl2, both reduces simultaneously. Thus, reduction of KMnO4 induces the reduction of HgCl2.

Enzymes are complex heterogeneous organic compounds which are produced by living plants and animals. They are actually protein molecules of high molecular mass and form colloidal solutions in water. They are very effective catalysts, catalyse numerous reactions, especially those connected with natural processes.

(i). Inversion of cane sugar: The invertase enzyme converts cane sugar into glucose and fructose.

(iv). Conversion of milk into curd: It is an enzymatic reaction brought about by lacto bacilli enzyme present in curd.

A colloid is a heterogeneous system in which one substance is dispersed as very fine particles in another substance called dispersion medium. Colloidal particles are larger than simple molecules but small enough to remain suspended. Their range of diameters is between 1 and 1000 nm (10–9 to 10–6 m).

(ii). Classification based on the nature of interaction between dispersed phase and dispersion medium:

a). Lyophilic colloids: Substances like protein, starch, rubber, whose molecules pass readily into colloidal state, whenever mixed with a suitable solvent. Such colloids are known as lyophilic colloids.

b). Lyophobic colloids: Substances such as arsenic sulphide, gold and other metals which are sparingly soluble. These substances do not pass into colloidal state readily and are called lyophobic colloids.

(iii). Classification based on type of particles of dispersed phase:

a). Multimolecular colloids: On dissolution, a large number of atoms or smaller molecules of a substance aggregate together to form species having size in colloidal range (diameter < 1 nm) Example : Gold sol, sulphur sol

When soap dissolve in water it dissociates into RCOO– & Na+. RCOO– ions consist of two parts i.e., non-polar part R (called tail) which is water repelling and polar part COO– (called head) which is water loving. The RCOO– ion present on the surface with their COO– groups in water and R group staying away from water. But at the CMC, anions are pulled into the bulk of the solution and aggregate to form a spherical shape with their hydrocarbons chain pointing towards centre of the sphere with COO– part remaining outward on the surface of the sphere. An aggregate thus formed called ionic micelles. These micelles may contain as many as 100 such ions. 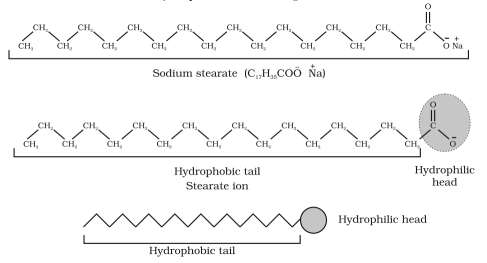 Certain freshly formed precipitates of silver chloride, aluminium hydroxide can be converted into colloidal solution by the addition of small amount of suitable electrolyte having one common ion. This process is called peptization.

The coagulation of colloids is due to neutralisation of charge due to which the particles come nearer to each other to form aggregates and settle down under the force of gravity. The process of setting of colloidal particles is called coagulation of the sol.

It is a process of removing dissolved substance from a colloidal solution by means of diffusion through a suitable membrane. The apparatus used for this purpose is called dialyser.

Dialysis is a slow process and can be made faster by applying an electric field if the impurity is only an electrolyte, this process is called electro-dialysis. 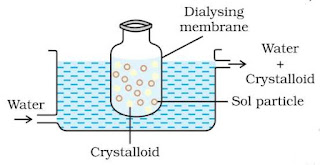 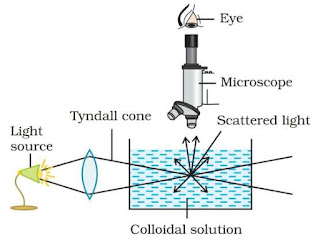 British Botanist Robert Brown observed that colloidal particles are in continuous zig-zag motion when viewed under a powerful ultramicroscope called Brownian movement. This motion is independent of the nature of colloids but depends on the size of particles and viscosity of the solution. 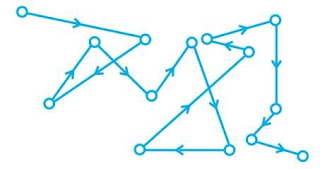 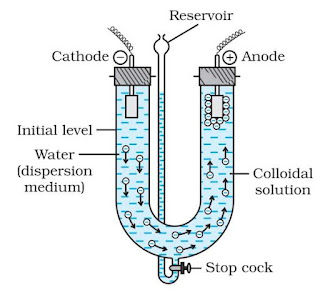 According to this rule, "Higher the valence of the flocculating ions added, the greater is its power to cause precipitation." Coagulating power for negatively charged solution : Al3+ > Ba2+ > Na+

These are liquid-liquid colloidal systems, i.e., the dispersion of finely divided droplets in another liquid. If a mixture of two immiscible or partially miscible liquids is shaken, a coarse dispersion of one liquid in the other is obtained which is called emulsion. There are two types of emulsions.