In the present unit, firstly we shall describe various steps for effective concentration of ores. After that we shall discuss the principle of some of the common metallurgical processes. Those principles shall include the thermodynamic and electro-chemical aspects involved in the effective reduction of the concentrated ore to the metal.

A few elements like carbon, sulphur, gold and noble gases, occur in free state while others are found in combined forms in the earth’s crust. Elements vary in abundance. Among metals, aluminium is the most abundant. In fact, it is the third most abundant element in earth’s crust.

1. Mineral: A natural material in which a metal or its compound occurs is called mineral.

2. Ore: A mineral from which a metal can be extracted economically is called an ore.

For example: Clay (Al2O3 SiO2.2H2O) and bauxite (Al2O3.2H2O) are two important minerals of aluminium but Al can be extracted economically from bauxite only.

(i) Matrix or Gangue: Minerals are always associated with earthy impurities known as matrix or gangue.

(iii) Slag: The low fusible substance produced by the reaction of flux with impurities during extraction of metals, is called slag. The process is called slagging operation.

(iv) Alloy: It is a homogeneous mixture of a metal with one or more elements that may be metals or non-metals.

(v) Metallurgy: The complete scientific and technological process employed for the extraction of a metal from its ore is called metallurgy.

The following methods used in the extraction of a metal from its ore are common in metallurgy:

1. Crushing of Ores: Larger pieces of an ore are converted into small pieces by using jaw crusher and then these small pieces are converted to powder by employing (i) the stamp mill or (ii) ball mill. This process is known as pulverisation.

(i) Magnetic separation: This method is employed to separate the magnetic and non-magnetic components. For example, magnetic impurity of wolframite (FeWO4) is separated from tin stone (the ore of tin). Other cases are chromite ore FeO.Cr2O3, magnetite Fe3O4, pyrolusite MnO2, etc. are magnetic. 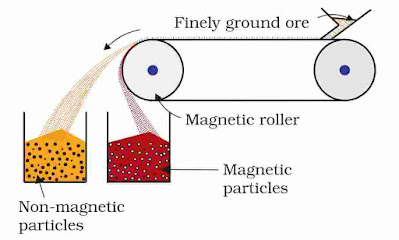 (ii) Hydraulic washing (gravity separation method): This method is employed to purify heavier ore such as oxides (e.g., haematite, tin stone etc.), carbonates (e.g., calamine, malachite, etc.), native gold, etc. The ore is washed with running water using big tubs or wilfley table that has sluices (grooves). The lighter impurities are washed away and the heavier particles of the ore settle down.

(iii) Froth floatation process: This method has been in use for removing gangue from sulphide ores. In this process, a suspension of the powdered ore is made with water. To it, collectors and froth stabilisers are added. Collectors (e.g., pine oils, fatty acids, xanthates, etc.) enhance non-wettability of the mineral particles and froth stabilisers (e.g., cresols, aniline) stabilise the froth.

The mineral particles become wet by oils while the gangue particles by water. It is possible to separate two sulphide ores by adjusting proportion of oil to water or by using 'depressants'. For example, in case of an ore containing ZnS and PbS, the depressant used is NaCN. It selectively prevents ZnS from coming to the froth but allows PbS to come with the froth. 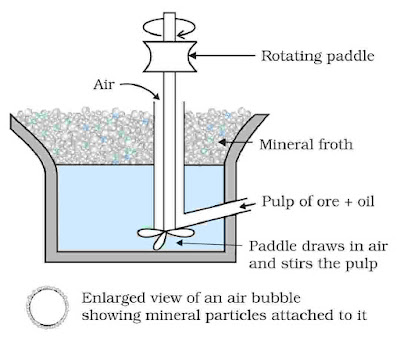 (iv) Leaching: It involves the treatment of the ore with a suitable reagent so as to make it soluble while impurities remain insoluble. The ore is recovered from the solution by suitable method. Example: Bauxite ore contains Fe2O3 and silica as impurities. When powdered ore is digested with an aqueous solution of NaOH at about 150°C under pressure, the alumina and silica dissolves forming soluble sodium meta aluminate and sodium silicate while Fe2O3 remains in the insoluble part and then Si is removed by crossing CO2.

3. (a) Calcination: It involves heating of the ore below its fusion temperature in absence of air to produce a new compound having higher % of metal as well as removing the moisture, organic matter and volatile impurities. Calcination is done in a reverberatory furnace and it makes ore porous.

(b) Roasting: It involves heating of an ore in limited supply of air below its melting point, to produce other chemical changes.

Roasting is usually done in reverberatory furnace or blast furnace.

4. Reduction of oxide to metal

(i) Smelting (Carbon reduction method): This method can be applied for the reduction of ZnO, PbO, etc.

Fe2O3 can be reduced by coke above 1079 K (approx) and by CO gas at a temperature lower than that.

(ii) Reduction by H2: Though, the use of H2 is expensive and not very safe, Yet H2 is used as reducing agent when carbon becomes ineffective for reduction.

(a) Kroll’s process for titanium

(b) Gold Schmidt alumino thermite process Oxides of manganese, chromium, iron, etc. can be reduced by using aluminium powder as reducing agent. A mixture of BaO2 and Mg is used as ignition mixture to supply heat.

(iv) Electrolytic reduction: The oxides of highly electropositive metals like Na, K, Ca, Mg etc. cannot be reduced by carbon at moderate temperature. These metals are thus obtained by the electrolysis of their oxides, hydroxides or chlorides in fused state. Sometimes, a small amount of some other salt is added to lower the fusion temperature or to increase the conductivity or both. The metal is deposited at cathode. Example: Sodium is obtained by the electrolysis of fused NaCl.

The metal obtained after reduction process still contains some impurities which can be removed by applying following method.

(a) Liquation process: This method is employed when impurities have higher melting point than metal. This method is used in purification of Sn, Pb and Bi etc.

(c) Pyrometallurgical oxidation process: This process is used when impurities have greater affinity for oxygen than the metals itself. The oxidation is done by

(d) Poling: This process is used to purify the metal from its oxide. In this process, molten metal containing oxide of it as impurity is stirred by logs of green wood to reduce oxide to metal e.g CuO to Cu and SnO to Sn.

(f) Zone refining or Fractional crystallisation: This method is employed to get metals of very high purity. (Ge, Si, B, Ga, In). This method is based on the difference in solubility of impurities in molten and solid state of the metal. A movable heater is allowed to move across the impure metal rods from one end to the other end, the pure metal crystallises while the impurities pass on to the adjacent melted zone.

Other metals those can be purified by this method are Zr, V, W, Hf, Si etc.

(h) Mond’s process: This method is employed for purification of nickel. Impure nickel is converted into volatile nickel carbonyl by reaction of CO at 60-80°C. Nickel carbonyl decomposes at 180°C to form pure nickel and CO.

The details of extraction process of some of the metals is as follows:

Iron is extracted from its oxide ores especially from the magnetite, haematite and limonite ores. The extraction involves the following steps:

(a) Concentration of ore: The ore is concentrated by gravity separation. The washed ore is then subjected to electromagnetic separation.

(b) Calcination: Heating of ore in absence of air below melting point. Moisture and CO2 are removed.

(c) Roasting: Heating of ore in air below the melting point. Impurities (such as P, S, C, As, Sb etc.) are removed as their volatile oxides.

(d) Smelting: The calcined ore is mixed with limestone (a flux) and coke (a reductant) and smelted in blast furnace.

The smelted ore is introduced in the furnace by lowering the cup and cone arrangement and at the same time furnace is lit and a blast of hot air is sent upwards through the Tuyeres. On the basis of variation in temperature, there are four zones where different chemical changes occur.

(i) Combustion zone: This is lowest part of furnace where the temperature is about 1500°C-1600°C.

Iron formed is called sponge iron. In this reduction zone heat is also evolved due to which CO partially decomposes.

(iii) Slag formation zone: This is the central zone where the temperature varies from 800-1000°C.

(iv) Zone of fusion: This zone is above combustion zone. The temperature ranges between 1200-1500°C. The spongy iron melts at 1300°C and collects at the bottom of hearth. The slag being lighter floats over the molten iron and prevents oxidation of molten metal. The slag and molten metal is removed from their respective holes. The molten metals are run into moulds and are allowed to solidify. 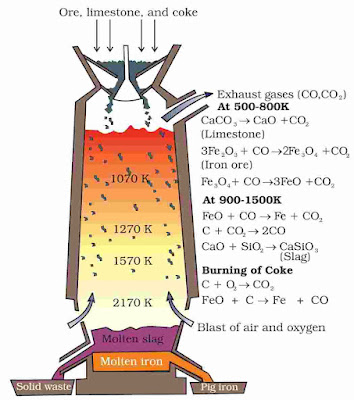 Iron obtained from the blast furnace is called pig-iron. It contains 93% (iron), 5% (carbon) and rest (silicon, phosphorus, sulphur, manganese). The pig iron is remelted and casted into moulds. This is known as cast iron.

Tin is extracted from cassiterite ore. The extraction involves the following steps:

(a) Concentration: The crushed and powdered ore is washed with running water, which removes lighter siliceous matter. Wolframite is removed by electromagnetic separator.

(b) Roasting: S and As are removed as their volatile oxides. Iron and copper pyrites are converted into their oxides and sulphates.

(c) Washing: This ore is then washed with hot water to dissolve out copper sulphate and iron sulphate. The lighter ferric oxide is washed off while the concentrated tin stone sinks to the bottom. It is called black tin.

(d) Smelting: Black tin is mixed with carbon and smelted in a reverberatory furnace. The ore is reduced to the metallic state while SiO2 is removed as slag.

Molten metal is cast into ingots or blocks. It is known as block tin and contains about 99.5% of metallic tin.

(e) Purification: The metal is purified by:

The copper metal is extracted from copper pyrites. The various steps involved during extraction are:

(a) Concentration: The ore is concentrated by froth floatation process.

(b) Roasting: The concentrated ore is heated in the presence of excess of air in a reverberatory furnace. During heating temperature is kept below its melting point. Following changes are observed.

From the base of the furnace molten mass called matte is removed.

After the completion of reaction, the molten copper is poured off. As it cools, it gives off the sulphur dioxide dissolved in it which comes out in the form of bubbles thus giving the shape of blisters to the surface of copper, which is therefore, known as Blister copper.

Lead is extracted from galena (PbS) involving the following steps:

1. Concentration: The crushed, powdered ore is concentrated by the froth floatation process.

2. Reduction: The concentrated ore is reduced in two steps:

Molten lead is drawn off from the lower part of the furnace.

The magnesite ore is calcinated into magnesium oxide.

4. Purification: Impure Zinc obtained above contain impurities of Pb, Fe, Cd, As etc. This impure Zinc is known as spelter. Firstly, Cd is distilled off at 800°C and then electrolytic purification is done using impure Zn as anode and cathode consists of sheets of pure Al. Pure Zn is scrapped off from Al-sheets.

Uses of Some Metals