In this chapter, we will begin with the electrical properties of conductors and their types. Then we will proceed towards electrochemical cell and electrolytic cell in which we will study about their functions, applications and relationship with temperature. Then we will move towards types of electrode potentials, batteries and corrosion. So, let us experience an electrifying tour, named "Electrochemistry".

All those substances which may allow the passage of electricity through them are called conductors. They are of two types:

Conductance in metals is due to mobility of electrons (electron sea-model). Metal may conduct electricity in solid state, molten state or even in dissolved state. With rise in temperature magnitude of metallic conductance decreases.

Conductance is due to movement of ions towards oppositely charged electrodes. It causes transfer of matter and hence decomposition.

The current (I) carried by a conductor (or electrolytic solution) is directly proportional to the potential difference (V) between the two ends of conductor.

The constant of proportionality in Ohm’s law is called resistance offered by conductor. Its SI unit is Ω (ohm) or (volt/ampere).

where, ρ = specific resistance or resistivity.

Resistance offered by a conductor of unit length and unit cross-sectional area is called specific resistance.

It is the property of conductor (metallic as well as electrolytic) which facilitates the flow of electricity through it. It is equal to reciprocal of resistance. Its SI unit is Ohm–1 (Ω–1) or mho.

It is reciprocal of specific resistance.

For any cell, the ratio of distance between electrodes and area of electrode is constant, called cell constant. It is denoted by G*.

It is defined as conductance of all the ions produced by ionization of one molar solution of an electrolyte. The SI unit of molar conductance is S m2 mol–1.

It is defined as conductance of all the ions produced by ionization of one normal solution of electrolyte. The SI unit of equivalent conductance is S m2 equiv-1.

At infinite dilution, an ionic species (cation or anion) contributes a fixed value at a given temperature, towards total conductance of the electrolyte, irrespective of other ionic species in combination with it.

If, `λ_{A}^{o}` and `λ_{B}^{o}` be limiting molar conductivities of cation and anion respectively then conductance of the electrolyte is given by

Amount of a substance deposited or liberated at any electrode is directly proportional to the charge passed.

where, Q is amount of charge flowing in the circuit.

When the same quantity of electricity is passed through solutions of different electrolytes connected in series, the weight of the substances produced at the electrodes are directly proportional to their equivalent weights.

It is a device which converts chemical energy into electrical energy. Redox reaction is responsible for the production of electricity. Oxidation and reduction takes place in two separate half cells. 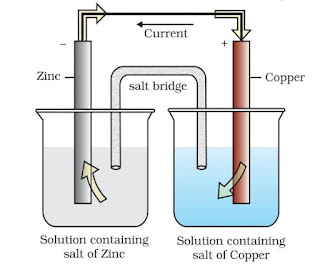 This cell contains two half cells, one contains ZnSO4 and the other contains CuSO4 solution. The two half cells are connected by an inverted U-tube which is known as salt bridge. It contains the concentrated solution of inert electrolyte like KCl, KNO3, NH4NO3 etc. For the preparation of salt bridge, agar-agar or gelatin is dissolved in hot concentrated aqueous solution of inert electrolyte.

When an electrode is kept in contact with a solution of its ions, the metal tend to lose electrons and thus passes into the solution in the form of metal ions. Thus, an electrical potential difference is set up between metal and its solution. This is known as half cell electrode potential. The difference between the electrode potential of two electrodes constituting an electrochemical cell is called electromotive force (EMF) of cell. 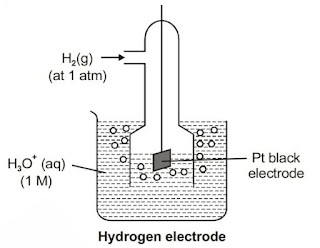 When electrodes in contact with their ions are arranged in an increasing order of their standard reduction potential, the resulting series is known as electrochemical series. 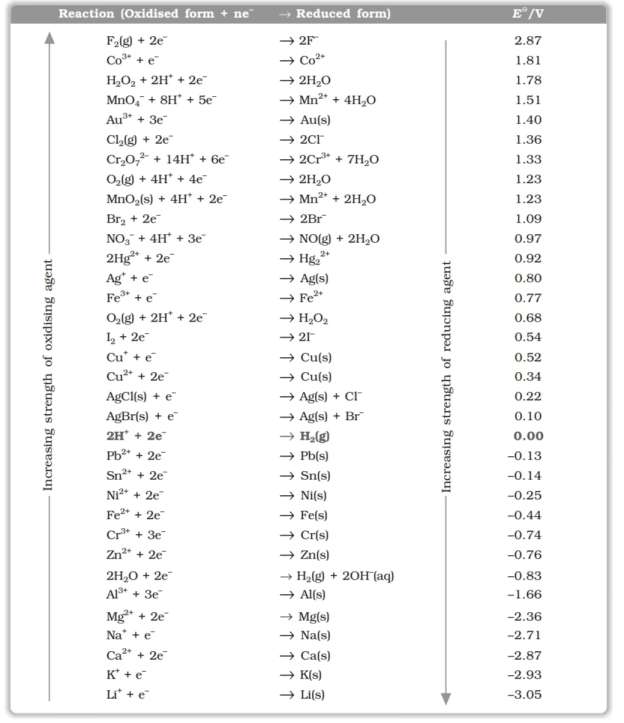 This equation is known as Nernst's equation.

Two or more electrochemical cells connected in series constitute a battery. These are the following types of commercial cells.

(i) Primary Cells: Those cells which cannot be recharged are known as primary cells. e.g., Mercury cell, dry cell. 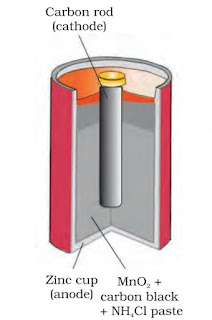 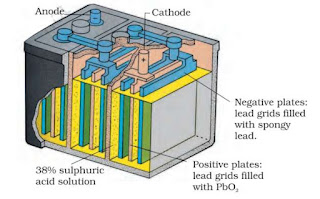 Process of slowly eating away of the metal due to attack of atmospheric gases, on the surface of the metal resulting into the formation of oxides, sulphides, carbonates is called corrosion. Corrosion of iron is called rusting. Rust is hydrated ferric oxide Fe2O3 . xH2O.