In this unit, we shall discuss the chemistry of three classes of compounds, namely — alcohols, phenols and ethers. Alcohols and phenols are formed when a hydrogen atom in a hydrocarbon, aliphatic and aromatic respectively, is replaced by –OH group. The subsitution of a hydrogen atom in a hydrocarbon by an alkoxy group (R–O/Ar–O) yields another class of compounds known as ‘ethers’.

Alcohols and phenols may be classified as mono, di, tri-or polyhydric compounds depending upon number of hydroxyl groups respectively in their structures as given below: 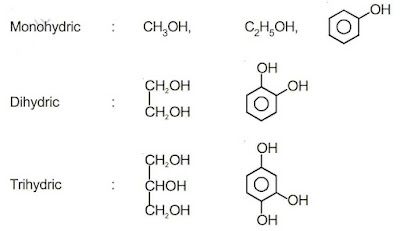 (a) Primary, secondary and tertiary alcohols: In these three types of alcohols, the –OH group is attached to 1ºC, 2ºC and 3ºC atom respectively.

(b) Allylic alcohols: In these alcohols, the –OH group is attached to a sp3 hybridized carbon next to the carbon-carbon double bond.

(c) Benzylic alcohols: In these alcohols, the –OH group is attached to a benzylic carbon atom. 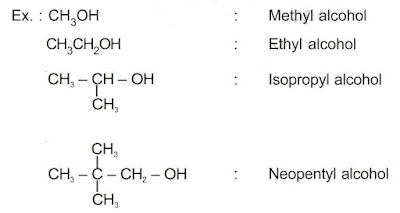 IUPAC name of an alcohol is derived from the name of the alkane and adding suffix ‘ol’ while the letter ‘e’ of the alkane is dropped.

Cyclic alcohols are named using the prefix cyclo and considering the –OH group attached to C–1.

The simplest hydroxy derivative of benzene is phenol.

(A) By acid reflux followed by hydrolysis: Alkenes react with water in the presence of acid as catalyst. The addition reaction takes place in accordance of Markovnikov’s rule.

(B) By hydroboration-oxidation: Diborane reacts with alkenes to give trialkyl boranes, which is oxidised to alcohol by H2O2 in alkaline medium to give alcohol.

(ii). From hydrolysis of alkyl halides

(A) By reduction of aldehyde and ketones: Aldehydes and ketones can be reduced to the corresponding alcohols by using reducing agents Pd/H2, LiAIH4, NaBH4.

Phenols can be prepared from benzene derivatives by any of the following methods:

Chlorobenzene is fused with NaOH at 623 K and 320 atmospheric pressure, phenol is obtained by acidification of sodium phenoxide.

Diazonium salts are hydrolysed to phenols by warming with water or by treating with dil.acids.

Cumene is oxidised in air to form cumene hydroperoxide. It is converted to phenol and acetone by treating with dilute acid.

Alcohols and phenols both are water soluble due to their ability to form H-bond with water. The solubility decreases with increase in size of hydrophobic group. Due to the same reason their boiling points are also greater than corresponding compounds of similar molecular mass except carboxylic acids. They are polar and protic in nature.

(i) Reaction with metals: Alcohol and phenol reacts with active metals such as sodium, potassium and aluminium to yield corresponding alkoxide/phenoxide and hydrogen.

(ii) Acidity of alcohols: The acidic character of alcohols is due to the polar nature of O–H bond. An electron releasing group increases electron density on oxygen tending to decrease the polarity of –OH bond. This decreases the acid strength. Hence acidic strength follows the order

(iii) Acidity of phenols: The hydroxyl group of phenol is directly attached to the sp2 hybridised carbon of benzene ring which acts as an electron withdrawing group.

(iii) Esterification: Alcohols and phenols both react with acids, acid chlorides and acid anhydrides to form esters. With carboxylic acids esterification is carried with little amounts of conc. H2SO4;

(vii) Reaction with PCl3 and PCl5 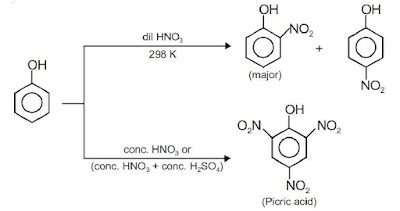 (xii) Halogenation: When phenol is treated with Br2 in solvents of low polarity such as CHCl3 or CS2 and at low temperature monosubstituted phenols are formed.

(xiii) Kolbe’s Reaction: Phenol when treated with NaOH it gives phenoxide ion which is more reactive than phenol, hence it undergoes electrophilic substitution reaction with CO2, a weak electrophile. Orthohydroxy benzoic acid is formed as the main product.

(xiv) Reimer-Tiemann Reaction: On treating phenol with CHCl3 in the presence of NaOH a –CHO group is introduced at o-position of benzene ring.

Methanol, CH3OH, also known as ‘wood spirit’, was produced by destructive distillation of wood. Today, most of the methanol is produced by catalytic hydrogenation of carbon monoxide at high pressure and temperature and in the presence of ZnO – Cr2O3 catalyst.

Methanol is a colourless liquid and boils at 337 K. It is highly poisonous in nature. Ingestion of even small quantities of methanol can cause blindness and large quantities causes even death. Methanol is used as a solvent in paints, varnishes and chiefly for making formaldehyde.

It is obtained commercially by fermentation of sugars. The sugar is molasses.

Glucose and fructose undergoes fermentation in the presence of zymase, which is found in yeast.

In wine making, grapes are the source of sugars and yeast. As grapes ripen, the quantity of sugar increases and yeast grows on the outer skin. When grapes are crushed, sugar and the enzyme come in contact and fermentation starts. Fermentation takes place in anaerobic conditions i.e. in absence of air. Carbon dioxide is released during fermentation.

Common names of ethers are derived from the names of alkyl/aryl groups written as separate words in alphabetical order and adding the word ether at the end.

According to IUPAC system of nomenclature, ethers are regarded as hydrocarbon derivatives in which a hydrogen atom is replaced by an –OR or –OAr groups. The larger (R) group is chosen as the parent hydrocarbon.

1. By inter-molecular dehydration of alcohols

It is an important method to prepare all types of ether. Alkyl halide is allowed to react with sodium alkoxide.

(i) Cleavage of C–O bond in ethers: Ethers due to low polarity are least reactive among other functional groups. With strong acids they form alkyl halide and alcohols by “C — O” bond cleavage: 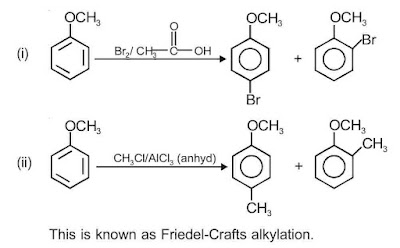