In this Unit, you will learn about amines and diazonium salts. Amines constitute an important class of organic compounds derived by replacing one or more hydrogen atoms of ammonia molecule by alkyl/aryl group(s).

Amines are classified as primary amines (RNH2 or 1°), secondary amines (R2NH or 2°) or tertiary amines (R3N or 3°) depending upon one, two or all the three hydrogen atoms of ammonia displaced by alkyl groups (R). 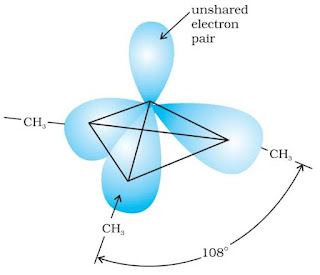 Arylamines have NH2 group directly attached to the benzene ring. They are named as derivatives of aniline or benzenamine.

In common system an aliphatic amine is named by prefixing alkyl group to amine i.e., alkylamine as one word. 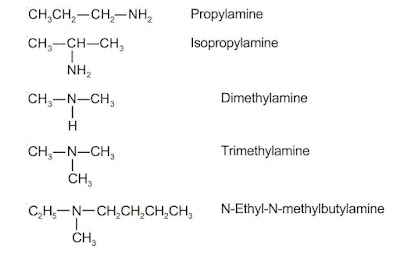 In IUPAC system, amines are named as alkanamines, derived by replacement of 'e' of alkane by the word amine.

Amines are prepared by following methods:

Nitro compounds are reduced to amines by passing hydrogen gas in the presence of finally divided Ni, Pd or Pt and also by reduction with metals in acidic medium.

The amides on reduction with LiAlH4 yield amines.

Hofmann developed a method for preparation of primary amines by treating an amide with bromine in an aqueous or ethanolic solution of sodium hydroxide.

1. Physical state and smell: The lower aliphatic amines are gases with fishy odour. Primary amines with three or more carbon atoms are liquid and still higher ones are solid. Among arylamines the lower members are liquids while higher members are solids.

2. Boiling point: All amines, except the tertiary amines are capable of forming intermolecular hydrogen bonds due to the presence of polar N—H bond.

3. Solubility: Aliphatic amines of lower molecular mass are soluble in water. With increase in molecular mass, the hydrocarbon part of the molecules becomes larger and consequently, the solubility in water gradually decreases.

Due to the presence of lone pair of electrons on nitrogen, amines exhibit basic character. They are stronger bases than water and are, therefore, protonated by water in their aqueous solutions.

Aromatic amines are far less basic than ammonia and aliphatic amines. It is because, in aniline or other arylamines, the – NH2 group is attached directly to the benzene ring. The unshared electron pair on nitrogen atom is in conjugation with benzene ring and thus making it less available for protonation. Aniline is a resonance hybrid of the following structures.

Amines reacts with alkyl halides to form amines of higher class. In this reaction, the amine acts as nucleophile.

Aliphatic and aromatic 1° and 2° amines undergo acylation through nucleophilic substitution of acid derivatives such as acid halides or anhydrides to form amide. During the reaction, the acid generated can form salt of the amine.

Aliphatic and aromatic primary amines on heating with chloroform and ethanolic potassium hydroxide form isocyanides or carbylamines which are foul smelling substances.

Benzene ring in aniline is so activated that on reaction with aqueous bromine all the ortho and para positions get substituted resulting in the formation of 2, 4, 6-tribromoaniline.

Direct nitration of aniline yields its oxidation products in addition to the nitro derivatives. Moreover, in the strongly acidic medium, aniline is protonated to form the anilinium ion which is meta directing.

The diazonium salts are represented by the general formula ArN2+X- where X- ion may be anion such as Cl-, NO3- , BF4- , Br-, HSO4- etc. The N2+ group is N☰N and is called diazonium group.

Benzenediazonium chloride is a colourless crystalline solid. It is readily soluble in water and is stable in cold water but reacts with water when warmed. It decomposes easily in the dry state.

1. Substitution by halide ion: The Cl-, Br- and CN- nucleophiles can easily be introduced in the benzene ring in the presence of Cu(I) ion. This reaction is called Sandmeyer reaction.

The aryl chloride or bromides can also be prepared by Gattermann reactions which involves the treatment of diazonium salt with Cu/HCl or Cu/HBr respectively.

2. Substitution by hydroxyl group: If the temperature of the diazonium salt solution is allowed to rise upto 283 K, the salt gets hydrolysed to phenol.

3. Substitution by –NO2 group: When diazonium fluoroborate is heated with aqueous sodium nitrite solution in the presence of copper, the diazonium group is replaced by –NO2 group.

Diazonium salts are very good intermediates for the introduction of –F, –Cl, –Br, –I, –CN, –OH, –NO2 groups into the aromatic ring. Thus, the replacement of diazo group by other groups is helpful in preparing those substituted aromatic compounds which can not be prepared by direct substitution in benzene.