The word polymer is derived from two Greek words ‘poly’ means many and ‘mer’ means unit or part. The term polymer is defined as very large molecules having high molecular mass (103–107u). These are also called macromolecules, which are formed by joining of repeating structural units on a large scale.

The repeating structural units are derived from some simple and reactive molecules known as monomers and are linked to each other by covalent bonds. This process of formation of polymers from respective monomers is called polymerisation.

The polymers may be classified in a number of ways depending upon the following criteria:

1. Classification Based on Source

On the basis of their origin, polymers may be classified as:

(a) Natural polymers: These polymers are found in plants and animals. e.g., are proteins, cellulose, starch, some resins and rubber.

(b) Semi-synthetic polymers: These are the polymers which are obtained from natural polymers. e.g., cellulose acetate (rayon), cellulose nitrate and cellulose xanthate.

2. Classification Based on Structure of Polymers

There are three different types based on the structure of the polymers.

(a) Linear polymers: These polymers consist of long and straight chains. The examples are high density polyethene, polyvinyl chloride, and polyesters. These are represented as:

These may be termed as one-dimensional polymers.

(b) Branched chain polymers: These polymers contain linear chains having some branches e.g., low density polyethene. These are depicted as follows:

These may be termed as two dimensional polymers.

It has three-dimensional network structure.

3. Classification Based on Mode of Polymerisation

Polymers can also be classified on the basis of mode of polymerisation into two subgroups.

4. Classification Based on Molecular Forces

On the basis of intermolecular forces, polymers are classified into four subgroups:

(a) Elastomers: These are rubber-like solids with elastic properties and the polymeric chains are held together by the weakest van der Waal interactions. The examples are buna-S, buna-N, neoprene, etc. 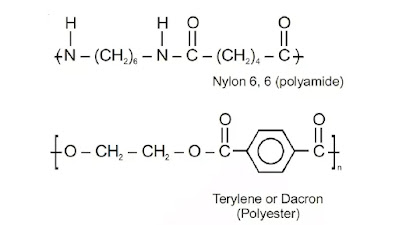 (c) Thermoplastic polymers: These are the polymers in which intermolecular forces of attraction are in between those of elastomers and fibres. They are neither very strong nor very week and have no cross-links between the chains. These are the linear or slightly branched long chain polymer which is capable of softening on heating and hardening on cooling. The examples are polythene, polystyrene, polyvinyls etc.

(d) Thermosetting polymers: These polymers are cross-linked or heavily branched molecules, which on heating undergo extensive cross-linking between different polymer chains to give a three-dimensional network solid and again become infusible. These cannot be reused. Some common examples are bakelite, urea-formaldehyde resins, etc.

In addition polymerisation, the molecules of the same monomer or different monomers add together to form polymer. This mode of polymerisation leading to increase in chain length through the formation of either free reactions or ionic species.

Ex.: Polymerisation of ethene to polyethene consists of heating a mixture of ethene with benzoyl peroxide initiator.

Preparation of Some Important Addition Polymers:

(i) Polythene: There are two types of polythene as given below:

This type of polymerisation involves a repetitive condensation reaction between two bi-functional monomers. The product of each step is again a bi-functional species and each step produces a distinct functionalised species which is independent of each other and the sequence of condensation goes on, which is called as step growth polymerisation. Example: Formation of terylene or dacron.

Preparation of some important condensation polymers:

(ii) Phenol Formaldehyde Polymer: Phenol formaldehyde resins are obtained by the condensation reaction of phenol and formaldehyde in presence of either an acid or a base catalyst. The reaction starts with the initial formation of ortho and para-hydroxymethyl phenol or its derivatives, which further reacts with phenol to form compounds through methylene bridges (–CH2 groups) in ortho, para or both ortho and para positions. The initial product could be a linear product (Novolac), used in paints. 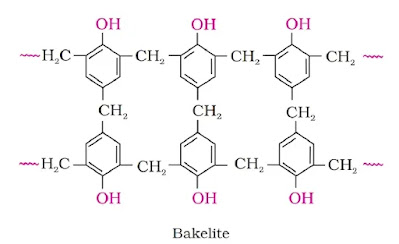 The properties of a copolymer are different from homopolymers. Polystyrene is easily breakable but polybutadiene is flexible. The copolymer, SBR is more flexible than polybutadiene and tougher than polystyrene. SBR is used for the manufacture of autotyres, floor tiles, footwear components etc.

(i) Natural Rubber: It is a natural polymer and also termed as elastomer. It is manufactured from rubber latex which is a colloidal dispersion of rubber in water. The latex is obtained from bark of rubber tree. Natural rubber may be considered as a linear hydrocarbon polymer of isoprene.

The cis-polyisoprene molecule is held together by weak van der Waal interactions and has a coiled structure. Thus it exhibits elastic properties.

Natural rubber becomes soft and sticky at high temperature. Its tensile strength is low and elasticity is maintained over a low temperature. It is soluble in non-polar solvent. A process of vulcanisation is carried out to improve these physical properties. Vulcanisation process consists of heating a mixture of natural rubber with sulphur at a temperature range between 373 K to 415 K. After this process, sulphur forms cross links at the reactive sites of double bonds and thus rubber becomes hard and more flexible. In the manufacture of tyre rubber, 5% of sulphur is used as a cross-linking agent. The structure of vulcanised rubber molecules are depicted below:

(ii) Synthetic Rubber: Synthetic rubber is vulcanizable rubber which is capable of getting stretched to twice of length. When the external stretching force is released then it returns to its original shape and size.

Properties of a polymer are closely related to their molecular mass, size and structure. The length of the polymer chain depends upon the availability of the monomer molecules near the growing polymer chain and also the reaction conditions employed. Thus the polymer sample contains chain of varying lengths and hence its molecular mass is always expressed as an average.

But it is not true for natural polymers such as proteins, where the chains are of identical length’s and hence their molecular masses are singular and not average in nature.

Many polymeric species can be produced by biological systems such as plants and animals. Starch, cellulose, proteins, peptides, RNA and DNA (nucleic acids) which control the various life processes are called biopolymers.

These biopolymers can be broken into their components either by enzyme-catalysed reaction or by themselves during a certain period of time and hence they are biodegradable. They are non-toxic and do not cause pollution. These polymers contain functional groups similar to the functional groups present in biopolymers. Aliphatic polymers are one of the important classes of biodegradable polymers. Some important examples are:

PHBV is used in speciality packaging, orthopaedic devices and to encapsulate drug. PHBV undergoes bacterial degradation in the environment.

It is an alternating polyamide copolymer of glycine and amino caproic acid and is biodegradable step-growth copolymer.

Besides, the polymers already discussed, some other commercially important polymers along with their structures and uses are given below in Table. 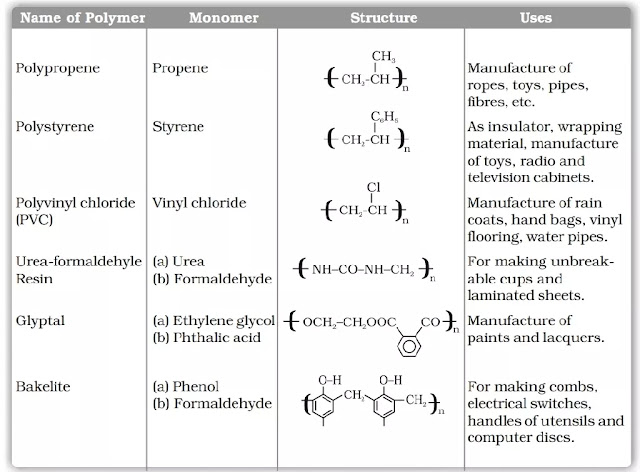