As we are quite aware that there are different types of hydrocarbons. Depending upon the types of carbon-carbon bonds present, they can be classified into three main categories –

These are the saturated chains of hydrocarbons containing carbon-carbon single bonds. Methane (CH4), is the first member of this family containing single carbon atom. Since it is found in coal mines and marshy areas, is also known as ‘marsh gas’. These hydrocarbons exhibited low reactivity or no reactivity under normal conditions with acids, bases and other reagents, they were earlier known as paraffins. The general formula for alkane is CnH2n + 2, where n stands for number of hydrogen atoms in the molecule.

For nomenclature of alkanes in IUPAC system, the longest chain of carbon atoms containing the single bond is selected. Numbering of the chain is done from the one end so that maximum carbon will be included in chain. The suffix ‘ane’ is used for alkanes. The first member of the alkane series is CH4 known as methylene (common name) or methene (IUPAC name). IUPAC names of a few members of alkenes are given below :

(B). Preparation of Alkanes

Though petroleum and natural gas are the main sources of alkanes, it can be prepared by several other methods as well.

(a) Reduction: Alkyl halides undergo reduction with zinc and dilute hydrochloric acid to give alkanes. In general the reaction can be represented as

(b) Wurtz reaction: Alkyl halides on treatment with sodium metal in dry ether give higher alkanes. This reaction is known as Wurtz reaction.

(b) Kolbe’s electrolytic method: An aqueous solution of sodium or potassium salt of a carboxylic acid on electrolysis gives alkane containing even number of carbon atoms at anode.

(i) State: Due to the weak van der Waals forces, the first four members C1 to C4 i.e., methane, ethane, propane and butane are gases. From C5 to C17 are liquids and those containing 18 carbon atoms or more are solids at 298 K. They all are colourless and odourless.

(ii) Solubility: Alkanes are generally insoluble in water or in polar solvents but they are soluble in non-polar solvents like, ether, benzene, carbontetrachloride etc. The solubility of alkanes follow the property “Like Dissolves like”.

(iii) Boiling point: The boiling points of straight chain alkanes increase regularly with the increase of number of carbon atoms. This is due to the fact that the intermolecular van der Waals forces increase with increase in the molecular size or the surface area of the molecule.

Generally alkanes show inertness or low reactivity towards acids, bases, oxidizing and reducing agents at ordinary conditions because of their non-polar nature and absence of π bond. The C–C and C–H bonds are strong sigma bonds which do not break under ordinary conditions but they undergo certain reactions under given suitable conditions.

(2) Combustion: Alkanes on heating in presence of air gets completely oxidized to carbon dioxide and water. It burns with a non-luminous flame. The combustion of alkanes is an exothermic process i.e., it produces a large amount of heat.

(3) Controlled oxidation: When methane and dioxygen compressed at 100 atm are passed through heated copper tube at 523 K yield methanol.

(4) Aromatization: The conversion of aliphatic compounds into aromatic compounds is known as aromatisation. n-Alkanes having six or more carbon atoms on heating to 773 K at 10–20 atmospheric pressure in the presence of oxides of vanadium, molybdenum or chromium supported over alumina get dehydrogenated and cyclised to benzene and its homologues. This reaction is also known as reforming.

(5) Reaction with steam: Methane reacts with steam at 1273 K in the presence of nickel catalyst to form carbon monoxide and dihydrogen. This method is used for industrial preparation of dihydrogen gas.

Alkenes are unsaturated hydrocarbons containing at least one carbon-carbon double bond with general formula CnH2n. Alkenes are also known as olefins (oil forming) since the first member, ethylene or ethene (C2H4) was found to form an oily liquid on reaction with chlorine.

For nomenclature of alkenes in IUPAC system, the longest chain of carbon atoms containing the double bond is selected. Numbering of the chain is done from the end which is nearer to the double bond. The suffix ‘ene’ replaces ‘ane’ of alkanes. The first member of the alkene series is C2H4 known as ethylene (common name) or ethene (IUPAC name). IUPAC names of a few members of alkenes are given below :

2. From alkyl halides: Alkyl halides (R–X) on heating with alcoholic potash eliminates one molecule of halogen acid to form alkenes. This reaction is known as dehydrohalogenation i.e., removal of halogen acid.

1. Addition of dihydrogen: Alkenes adds one mole of dihydrogen gas in presence of catalysts such as Ni at 200–250°C, or finely divided Pt or Pd at room temperature to give an alkane.

2. Addition of halogens: Halogens like bromine or chlorine add up to alkene to form vicinal dihalides in presence of CCl4 as solvent. The order of reactivity of halogens is F > Cl > Br > I.

Markovnikov rule: According to the rule, the negative part of the addendum (adding molecule) adds to that carbon atom of the unsymmetrical alkene which is maximum substituted or which possesses lesser number of hydrogen atoms.

Like alkenes, alkynes are also unsaturated hydrocarbons with general formula CnH2n – 2. They contain at least one triple bond between two carbon atoms. These have four H-atoms less compared to alkanes. The first stable member of alkyne series is ethyne commonly known as acetylenes.

(A). Properties of Alkynes

(ii) Addition of halogens: Alkynes contain a triple bond, so they add up, two molecules of halogen.

(iv) Addition of water: Like alkanes and alkenes, alkynes are also immiscible and do not react with water. However, one molecule of water adds to alkynes on warming with mercuric sulphate and dilute sulphuric acid at 333 K to form carbonyl compounds.

(v) Polymerisation: Ethyne on passing through red hot iron tube at 873 K undergoes cyclic polymerization. Three molecules polymerise to form benzene, which is the starting molecule for the preparation of derivatives of benzene, dyes, drugs and large number of organic compounds.

Since all the six hydrogen atoms in benzene are equivalent; so it forms one and only one type of monosubstituted product. When two hydrogen atoms in benzene are replaced by two similar or different monovalent atoms or groups, three different position isomers are possible which differ in the position of substituents. So we can say that disubstituted products of benzene show position isomerism. The three isomers obtained are 1, 2 or 1, 6 which is known as the ortho (o-), the 1, 3 or 1, 5 as meta (m-) and 1, 4 as para (p-) disubstitued compounds.

The molecular formula of benzene, C6H6, indicates a high degree of unsaturation. All the six carbon and six hydrogen atoms of benzene are identical. On the basis of this observation August Kekule in 1865 proposed the following structure for benzene having cyclic arrangement of six carbon atoms: 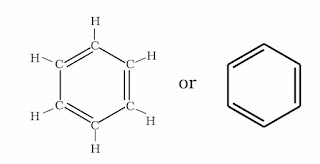 Even though the double bonds keep on changing their positions. The structures produced is such that the position of nucleus remains the same in each of the structure. The structural formula of such a compound is somewhat intermediate (hybrid) between the various propose formulae. This state is known as Resonance. 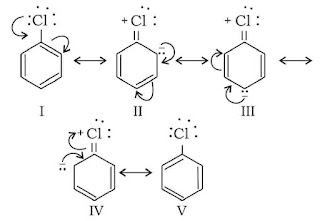 (iii) Reduction of phenol: Phenol is reduced to benzene by passing its vapour over heated zinc dust.

(i) Nitration: A nitro group is introduced into the benzene ring when benzene is heated with a mixture of concentrated nitric acid and concentrated sulphuric acid.

(ii) Halogenation: Arenes undergo halogenation when it is treated with halogens in presence of Lewis catalyst such as anhy. FeCl3, FeBr3 or AlCl3 to yield haloarenes.

(iii) Sulphonation: The replacement of a hydrogen atom by a sulphonic acid group in a ring is called sulphonation. It is carried out by heating benzene with fuming sulphuric acid or oleum (conc. H2SO4 + SO3).

(iv) Friedel-Crafts alkylation reaction: When benzene is treated with an alkyl halide in the presence of anhydrous aluminium chloride, alkylbenzene is formed.

Activating Groups: Electron donating groups (EDG, +M, +I, +H. C. effect) in the benzene ring will more stabilize the σ-complex (Arenium ion complex) with respect to that of benzene and hence they are known as activator.

Deactivating Groups: Electron drawing groups (–M, –I effects) will destabilize σ-complex as compared to that of benzene. Therefore substituted benzenes where substituents are electron withdrawing decreases reactivity towards SE reactions.