The elements in which last electron enters into p-subshell are called as p-block elements. The number of p-orbitals is three and, therefore, the maximum number of electrons that can be accommodated in a set of p-orbitals is six, hence p-block contains six groups.

Group III A contains six elements : boron, aluminium, gallium, indium, thallium and ununtrium. The penultimate shell (next to the outermost) conains 1s2 in boron, 2s2 2p6 (8 electrons) in aluminium and (n–1)s2(n–1)p6(n–1)d10 (18 electrons) in other elements.

Boron is a non-metal and always form covalent bonds. Boron family is known as most heterogeneous family as there is no regular trend in all properties, as it comes after d-block, lanthanoid contraction, poor shielding of d-orbital, they have large deviation in properties.

2. Reaction with water: Boron is not affected by water or steam under ordinary conditions. However, Aluminium reacts with cold water if oxide layer is not present on its surface.

3. Reaction with acids: Boron is not affected by non-oxidising acids like HCl and dilute H2SO4 while other elements dissolve and liberate H2 gas.

4. Reaction with alkalies: Boron, Aluminium, Gallium react with alkali solutions whereas Indium and Thallium are not affected by alkalies.

Boron, the first member of group 13 elements, shows anomalous behaviour and differ from rest of the members of its family. The main reason for this difference are :

It is the most important compound of boron. It is a white crystalline solid. Borax dissolves in water to give an alkaline solution.

From Boric acid: Boric acid is neutralised with sodium carbonate and the resulting solution is cooled to get crystals of borax.

(i) It gets hydrolysed with water to form an alkaline solution

(ii) Borax bead test: On heating borax first swells up due to elimination of water molecules. On further heating it melts to a liquid which then solidifies to a transparent glassy mass.

(iii) It is a useful primary standard for titration against acids.

The simplest boron hydride known, is diborane. It is prepared by treating boron trifluoride with LiAlH4 in diethyl ether.

(i) Stable at low temperature only, colourless and highly toxic.

Uses of Boron and Aluminium and Their Compounds

(a) Boron fibers: It is mixed with plastic to form a material which is lighter than aluminium but tougher and stiffer than steel hence it is used in body armour, missiles and aircrafts.

(b) Boron-10 (10B) isotope: Boron carbide rods or boron steel are used to control nuclear reactions as neutron absorbers.

(c) Borax: It is used in manufacture of enamels and glazes for pottery and tiles. It is also used in making optical glasses and also borosilicate glasses which is very resistant to heat and shock. It is used as an antispectic.

(d) Boric acid: It is used in glass industry, in food industry as preservative. It is also used as an antiseptic and eye wash under the name ‘boric lotion’. It is also used in manufacture of enamels and glazes for pottery.

Aluminium and its alloy are used in packing industry, utensil industry, aeroplane and transportation industry etc.

(a) Used in chromatography.

(b) Used in making bauxite bricks which are used for lining furnaces.

Group IV A contains six elements : carbon, silicon, germanium, tin, lead and ununquadium. The penultimate shell (prior to outermost) contains 1s2 -grouping in carbon, 2s22p6 (8 electrons) in silicon and (n–1)s2(n–1)p6(n–1)d10 (18 electrons) in other elements. This shows why carbon differs from silicon in some respects and these two differ from rest of the members of this group. General electronic configuration is ns2np2.

[A]. Atomic and Physical Properties

The important properties of carbon family are discussed below:

(4) Catenation: Catenation is ability of like atoms to link with one another through covalent bonds. Tendency decreases from C to Pb. It is due to the decreasing M-M single bond energy. Thus, the tendency for catenation decreases as:

(5) Allotropy: All the elements of the carbon family with the exception of lead exhibit allotropy. Carbon exists as two important allotropic forms diamond and graphite.

2. Reactivity towards water: In this family three members i.e., carbon, silicon and germanium are affected by water while lead is not affected by water due to formation of protective oxide film but tin decomposes with steam into tin dioxide and hydrogen gas.

3. Reactivity towards halogen: These elements form two types of hallides - MX2 and MX4. Most of the MX4 are covalent. SnF4 and PbF4 are ionic in nature.

Carbon shows allotropism due to catenation and pπ-pπ bond formation. Carbon exists in two allotropic forms – crystalline and amorphous. The crystalline forms are diamond and graphite while the amorphous forms are coal, charcoal and lamp-black. The third form is fullerenes discovered by Kroto, Smalley and Curl.

In diamond each carbon is joined to other four carbon tetrahedrally and carbon-carbon bond length is 1.54Å and bond angle is 109º28′ having sp3 hybridisation on each carbon. All four electrons in carbon are involved in bonding hence, it is bad conductor of electricity. Diamond is an excellent thermal conductor. 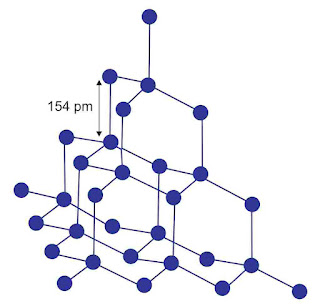 It is hardest natural substance known. It is transparent and has a specific gravity 3.52 and its refractive index is high (2.45). Difficult to break due to extented covalent bonding. Diamond is used for making cutters. Blades of diamond are used in eye surgery and as an abrasive for sharpening hard tools. Impure diamonds (black) are used in knives for cutting glass.

Each carbon is sp2 hybridised. It has layered structure. These layers are attracted by van der Waals force. Each carbon has one free electron in p-orbital, so it is a good conductor of electricity. All electrons get delocalized in one layer and form π-bond. Electron jumps from one orbital to another hence it is a good conductor of heat and electricity. In graphite carbon-carbon bond length is 141.5 pm and distance between adjacent graphite layer is 340 pm. 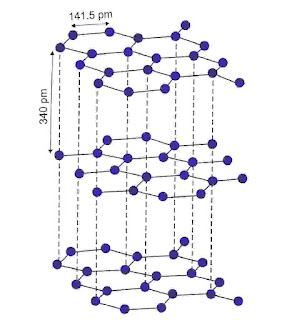 It was made as a result of action of a laser beam or strong heating of a sample of graphite in presence of inert atmosphere. The sooty material mainly contains C60 with C70 (small amount). Most common fullerene is C60 called Buckminsterfullerene which has football-like structure. It contains 20 six-membered ring and 12 five-membered ring. It is used to make ball bearings. 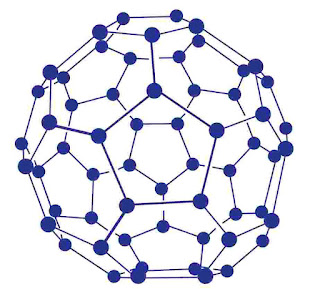 It is the crude form of carbon. It has been formed in nature as a result of slow decomposition of vegetable matter under the influence of heat, pessure and limited supply of air. The successive stages of transformation are : peat, lignite, bituminous, steam coal and anthracite. Bituminous is hard stone, burns with smoky flame. The superior quality is anthracite which burns with non-smoky flame.

Preparation: Carbon dioxide is mostly prepared by decomposition of carbonates and bicarbonates

Properties: Carbon dioxide is an acidic, colourless gas. The important properties are: