Buzz group teaching method is that method of teaching in which original sources of information are used to explain a point or variety a fact or establish a principle or describe an event. This method involves activity on the parts of the teachers as well as pupils. Buzz group teaching method can be used in the beginning of the lesson to motivate the pupils. While teaching the topic 'Mugalempire', he may show them the pictures of Red fort, Tajmahal or Jama masjid. This method can be used during the course of the lesson to develop it and correlate the facts events or principles involved in the lesson. 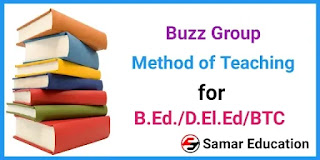 Buzz groups are formed by dividing large groups into small discussion groups of 2 to 15 people who meet simultaneosuly for a specified time to discuss a specific question, problem, or issue. Bellon, Bellon, and Blank (1992) note that such groups allow for an environment that fosters independent, cognitive thinking among group members with less reliance on presenter-based rote memorization.

1. Any size group can be divided into buzz groups if there is room available for the groups to get together. The leader begins by dividing the overall group into smaller groups of anywhere from 2 to 15 people. These smaller buzz groups should have room to sit either facing each other or in a circle, which will increase the discussion.

2. Once the groups are formed, the leader will introduce the issue or problem to be discussed. The issue can be the same for all groups, or each group can have a different phase or subproblem to discuss. The Professional Teacher Education Module Series (1984) suggests narrowing the topic, allowing for participant achievement level, and having time restrictions to prevent a high frustration level among the participants.

3. Once the issue or problem to be discussed is clarified and understood by each group, the groups should be asked to choose their own leaders and recorders, or the presenter can appoint one for each group.

4. The group leader makes certain that the members of the group become acquainted with each other, leads the discussion, and tries to get all the members of the group to participate. Williams (1983) offers that buzz groups provide participants with an interactive atmosphere that creates willing participation within a small or large group. The recorder takes notes and prepares a summary to be presented when all the groups come together.

5. When the buzz groups are very small, with only two or three members, the formality of selecting a group leader and recorder is not necessary. In those cases, the presenter should just ask each group to appoint a spokesperson to present their information at the end of the buzz group session.

6. The time allowed in the buzz groups should be specified at the beginning and can range anywhere from 2 to 20 minutes, depending on the number of people in each group, the complexity of the issue, and the purpose of the buzz groups. If the buzz groups are mainly designed to help the members get acquainted, for example, then the time needs to be short. If the groups are tackling a difficult problem or subproblem, then more time will be necessary.

7. While the groups are meeting, the teacher can move from group to group, listening and, when necessary, raising questions to stimulate discussion or bring the discussion back on track. The presenter should be careful not to stay too long at any group so that the members will not direct their questions to him or her.

8. At the 1- or 2-minute mark, the presenter should sound warning that time is almost up. When the time has ended, the teacher or discussion leader reconvenes the group into the large group and calls for the reports of the buzz group recorders. After each group has reported, the presenter may want to open the floor to general discussion.

9. Depending on the complexity of the problem and the purpose of the discussion, the group recorders may be asked to get together later to summarize their findings into a report on the topic discussed.

Buzz groups with more than three people usually involve moving some chairs around so that each group can form its own circle. Circular seating enhances the discussion of each group and helps the members of the group become better acquainted with each other.

Limitations of the Buzz Group Method