Meaning, Definition and Characteristics of Emotional development in Adolescence

The word emotion has been derived from the Latin word 'emovere' which has mean "to move out". Emotional development is one of the major aspects of the 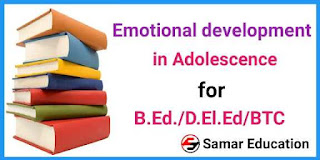 Emotion is expressed in love, fear, anger, laughter and tears etc., It involves feelings of jubilation or depression and impulse to action and awareness of perception. Basically, human beings are creatures of feelings or emotions. Our emotions control our behaviour. Adolescence is marked by heightened emotionality. The history of world is full of the heroic deeds of adolescents, when many adolescents sacrifice their lives at the altar of freedom of the country. Heightened emotionality is evident from nail biting, tension, conflicts, quarrels with parents, sibling and classmates. etc.

According to P.T. Young, "An emotion is disturbed state of organism in which visceral changes due to increased activity of autonomic nervous system and an emotion originates within the psychological situation."

(1) Change of roles in home, school and society:- As soon as the child enters the adolescence, his social roles and responsibility change. Change of roles requires adjustment to new situations in a different way. The adolescent has to change his old habits of childhood in home, school and society. The change over to new pattern of habits creates emotional tensions in adolescents. The process of weaning: from tots! dependence to independent role with greater responsibility disturbs the adolescents.

(2) Unfavourbale relations in home:- Parents in most cases are responsible for heightened emotionality in adolescents because they do not prepare their sons and daughter to meet the problems of adolescence. They do not change their own attitudes towards adolescents. They still treat them as children which creates rebelliousness in adolescents against their parents. There are quarrels with parents and siblings on small matters.

Adolescent needs money to meet his demands of recreation, clothes, etc. like other boys of his class. He becomes emotionally disturbed when he fails to meet these demands. Adolescent has to meet new social situation which disturbs him. As talking with the member of opposite sex and meeting officer or elders.

(3) Social expectations:- When the child becomes an adolescent, society and parents expect him to think and act like an adult for which he is not physically and intellectually matured. The adolescent fails to decide his status in social settings and failure to meet social expectations results in emotional disturbances and failure to adjust to new environment. The adolescent because of shift of roles has to make new adjustment in different social situations. He has to leave his accustomed patterns of childhood. He has to learn in short period new adjustment.

The Indian society is divided into several sub-groups, each following its own religious beliefs. One caste hates the other. The adolescent is very sensitive to the feelings of hatred, partiality and nepotism in the society.

(6) School failures:- School failures cause heightened emotionality so much so that many adolescents commit suicide, leave home and sometimes give up education.

(8) Vocational problems:- The most pressing problem for Indian adolescent is the future vocation after schooling. When he finds many adults roaming on the road without any means of livelihood, he is disturbed and permanent anxiety develops in his mind. Particularly those adolescents, who come from poor families and are the supporters of their families, are more disturbed.

There are certain symptoms which are evidence of emotional disturbances in adolescents. The teacher can locate these adolescents in his class and can provide them individual guidance.

Symptoms: Excessive nail biting, thumb sucking, bitting the lips. scratching the nose, pulling or twisting the hair, scratching the head, picking the face, touching the face with the hand, leaning the face on the hands and rocking legs etc. Use of other mechanisms as aggression, in-attention, shyness, withdrawal and hyperactivity, also indicate emotional disturbance.

Characteristics of Emotions in Adolescence

(3) Emotional feelings are widened:- As the child grows he starts taking account of past and imagines of future and thus we can expect him to become more patient and able to tolerate delay. He gets pleasures from what he expects in future.

There is great shift in his social sphere. Now he starts making friendship with his classmates. The sphere, of his social relation increases. He starts appreciating elder and younger people. Some times he is emotionally attached with a hero of his choice who may be a historical figure, politician, heroine or hero and other leader according to whose principles he wants to shape his life.

(4) Bearing of tensions:- Adolescents develop competencies to bear the tensions in different social situations. The emphasis is on self-control. The adolescents feel a kind of inner freedom, freedom to feel and experience, in an intimate personal way.

(5) Capacity of sharing emotions:- The adolescents develop the concern about the feelings of others and an increased capacity for sharing emotional experiences with others. In childhood, children are not able to control their emotions. Sharing of emotional experience reaches its fullest development when an adolescent is able to relate himself to another person in such a way that the satisfaction of the person is just as important as his own. It means he begins to love his neighbours as much as himself.

(6) Loyalties expand:- Emotional development begins from the home environment of the infant and during adolescence it is expanded beyond home and neighbourhood. These loyalties are identified with peers and leaders of various fields.

(7) Realism in emotional experiences:- Now the child, enters the period of reality. An adolescent can perceive and appreciate people around him. He recognizes the weakness and strength of one's character.

(8) Reviewing of hopes and aspirations:- Adolescence is the period of life when one has high hopes and aspirations for his future life. Some adolescents work realistically to achieve their expectations and others do little to realize their hopes, they remain in illusion, and in the world of day dreams and flights of fancy which make them unrealistic.

(9) Toleration of aloneness:- The adolescents develop a feeling of aloneness. Sometimes they like to be alone in their home.

(10) The adolescent learns to externalize:- His feelings in the various situations of external environment, he moves in. He can project his feelings on others.

(11) Increased compassion:- Compassion is the single quality which enables a man to achieve highest peak and the deepest reach in his search for self-fulfilment. Compassion means fellowship of feeling. It denotes an ability to enter into kinship with the feelings and impulses involved in any sort of emotional experience, whether it be joy or sorrow. To be compassionate means that a person is able to enter his own feelings and appreciate the emotional feelings of others.