Meaning, Defintions and Characteristics of Emotional Intelligence in Psychology

Intelligence is the ability to acquire and apply knowledge. Intelligence is defined as mental capability that involves the ability to reason, to plan, to solve problems, to think abstractly, to comprehend complex ideas, to learn quickly and to learn from experience. It is not merely book learning, a narrow academic skill or test-taking smartness. 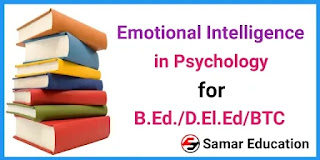 2. According to Wood Worth, "Intelligence is the innate capacity to solve the problem in the light of past experience and knowledge."

3. According to Terman, "Intelligence is an ability to carry on abstract thinking."

4. According to Throndike, "Intelligence is power of good responses from the point of view of truth and fact."

5. According to Munn, "Intelligence is a flexibility of the mind of meet the new situations."

Emotional Intelligence (EI) is most often defined as the ability to perceive, use, understand, manage, and handle emotions. People with high emotional intelligence can recognize their own emotions and those of others, use emotional information to guide thinking and behavior, discern between different feelings and label them appropriately, and adjust emotions to adapt to environments.

Consequently, the I.Q. Scores are often made into use for the selection, classification and promotion of the individuals in various programmes, courses and job placements. However, researches and experiments conducted in the 90's onwards have tried to challenge such over dominance of intelligence and its measure I.Q. by replacing it with the concept of emotional intelligence and its measure emotional quotient (E.Q.). These have revealed that a person's that a person's emotional intelligence measured though his E.Q. may be a greater predictor of success than his or her I.Q.

Historically speaking, the term emotional intelligence was introduced in 1990 by two American University professors Dr. John Mayer and Dr. peter Salovery in their attempt to develop a scientific measure for knowing the differences between people's ability in the areas of emotions. However, the credit for popularizing the concept of emotional intelligence goes to another America psychologist Daniel Goleman through his book Emotional Intelligence: "Why it can Matter More Than I.Q. published in 1995".

According to John D. Mayer and peter Salovey, "Emotional intelligence may be defined as the capacity to reason with emotion in four areas: to perceive emotion, to integrate in thought, to understand it and to manage it."

According to this definition, every one of us may be found to have varying capacities abilities with regard to one's dealing with emotions. Depending upon the nature of this ability, he or she may be said to be more or less emotionally intelligent in comparison to others in the group.

Based upon these contemporary viewpoints about the concept of emotional intelligence, we may understand one's emotional intelligence as a unitary ability helpful in knowing feeling and judging emotions in close cooperation with one's thinking process for behaving in a proper way in the ultimate realization of the happiness and welfare of the self in tune with other.

Significance and Importance of Emotional Intelligence

2. Unlike I.Q., emotional intelligence may be the best predictor of success în life. Emotionally intelligent people are more likely to succeed in everything they undertake in their lives.

3. Unlike what is claimed about I.Q. we can teach and improve in children and any individual some crucial emotional competencies paving the way for increasing their emotional intelligence and thus making their lives healthier, more enjoyable and successful in the coming days.

4. The concept of emotional intelligence is to be applauded, not because it is totally new but because it captures on one compelling term, the essence of what our children or all of us need to know for being productive and happy.

5. I.Q. and even standard Achievement Test (SAT) scores do not predict who will be successful in life. Even school success can be predicted more by emotional and social measures (e.g. being self-assured and interested, following directions, turning to teachers for help and expressing needs while getting along with other colleagues) than by academic ability.

7. One's emotional intelligence helps him much in all the spheres of life through its various constituents or components namely knowledge of one's emotions (self awareness), managing the emotions, motivating oneself, recognizing emotions in other (empathy) and handling relationships. The achievement of the end results in terms of better handing of mutual relationships is quite essential and significant in one's life. It can only be possible through one's potential of emotional intelligence and its development.

The main features of Intelligence are the following:

Some people are born with EQ, while others can think of it as a skill set that needs to be acquired. With practice, it’s possible to develop or strengthen it. Here are a few ways to do just that:

1. Self-awareness:- Consider setting a regular time or day to journal. This can allow you to reflect on how you behaved in interactions and make a note of things that bothered you. You can go back and read over them from time to time and “study” yourself. You can also meditate and observe your thoughts.

2. Self-regulation:- It may help to practice deep breathing exercises regularly, especially during conflict. You can learn to reframe challenges as opportunities in disguise and “failures” as learning experiences. Try to practice radical acceptance of any emotions that come up and verbalize what you’re feeling.

3. Motivation:- Consider taking time out and celebrating each one of your wins. When you decide you want to do something new, it’s a good idea to identify your “why.” It can also help to break down your to-do list into bite-size chunks, or micro-tasks, and to work with an accountability partner or coach.

4. Empathy:- To build empathy, try paying attention to your surroundings. See if you can pick up on the “energy” of your environment. You could also try talking to new people or volunteering for a cause you care about. If you’re stuck in traffic, consider looking around at people sitting in their cars and seeing what you can pick up about them.

5. Social skills:- Aim to put yourself in new situations. When you do, try to pay attention to your body language and maintain eye contact. Practicing active listening can be beneficial, too. Consider this quote from Gandhi: “Speak only if it improves upon silence.”