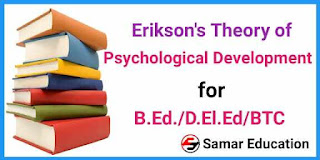 The description of the eight psycho-social stage in given as follows:

Trust versus Mistrust:- This stage ranges form birth to eighteen months of age. The first task of an infant is to develop the basic sense of trust in himself and in his environment. During this stage, the infant is completely dependent on others for the fulfilment of his basic needs. If his needs are not satisfied then he gradually loses his sense of faith in the world around him. The sense of faith is laid down during this period.

Autonomy versus a Sense of Shame:- This stage covers the period between eighteen months to three years. The stage develops the sense of autonomy. He does not want help from others. He likes to do things in his own way. Parents can help their children in developing a healthy sense of autonomy through a balance of firmness and permissiveness. Parents should decide the limit of freedom for children keeping into consideration the conditions of the environment. Children who are not given legitimate freedom to explore their environment, develop doubt about their abilities to perform a specific task and become self-conscious. Shame is the other part of this feeling. We know that there are children who are terribly self-conscious and fearful of their weaknesses being exposed.

Initiative versus a Sense of Guilt:- This stage starts from three years of age and continues up to six years. Children grow at very rapid rate in almost all dimensions such as social, physical, intellectual and emotional etc. Social boundaries expand beyond the home environment. Children may express their autonomy in behaviour which is called initiative. They begin to develop a sense of right or wrong. If the feeling of guilt is overtaxed by moralistic parents and teachers, children may develop feeling of badness which may inhibit their usage to test themselves in an expanding social world.

Industry versus a Sense of Inferiority:- This stage starts from six years and continues up to twelve years of age. The child devotes his energies to self-improvement and to the conquest of people and things. According to Erikson, "a child becomes ready to apply himself to given skills and tasks which go far beyond the mere playful expression of his organ modes on the pleasure in the function of his limbs. He develops industry, i.e., he adjusts himself to the inorganic laws of the tool world. The child wants to master whatever he does. He is full of energy and does efforts to produce new things.

Identity versus Confusion:- It occurs during adolescence, from about 12-18 years. During this stage, adolescents search for a sense of self and personal identity, through an intense exploration of personal values, beliefs, and goals. This is a major stage of development where the child has to learn the roles he will occupy as an adult. It is during this stage that the adolescent will re-examine his identity and try to find out exactly who he or she is. Erikson suggests that two identities are involved: the sexual and the occupational. During adolescence, the transition from childhood to adulthood is most important. Children are becoming more independent, and begin to look at the future in terms of career, relationships, families, housing, etc.

Generativity versus Stagnation:- This stage takes place during during middle adulthood (ages 40 to 65 yrs). We give back to society through raising our children, being productive at work, and becoming involved in community activities and organizations. Through generativity we develop a sense of being a part of the bigger picture. Success leads to feelings of usefulness and accomplishment, while failure results in shallow involvement in the world.

Ego Integrity versus Despair:- This stage begins at approximately age 65 and ends at death. It is during this time that we contemplate our accomplishments and can develop integrity if we see ourselves as leading a successful life. Erik Erikson believed if we see our lives as unproductive, feel guilt about our past, or feel that we did not accomplish our life goals, we become dissatisfied with life and develop despair, often leading to depression and hopelessness. Success in this stage will lead to the virtue of wisdom. Wisdom enables a person to look back on their life with a sense of closure and completeness, and also accept death without fear.

If we use the term growth and development synonymously, the major aspects or areas, in which a human child goes ahead for his complete development, can be named as follows:

2. Intellectual or Mental Development:- It includes the development of intellectual powers like the powers of reasoning and thinking, imagination, concentration, creativity, sensation, perception, memory, association, discrimination and generalization etc.

3. Emotional Development:- Under this aspect, starting with the basic instinct, the evolution of various emotions takes place and also the emotional behaviour is developed to the point of emotional maturity.

4. Moral or Character Development:- Moral or character development includes the evolution of moral sense and development of character. The individual develops his ethical and moral codes.

5. Social Development:- Initially the child is selfish and antisocial. Gradually he is developed into a social being by learning to behave according to the rules and norms of his society and makes adjustment to it.

6. Language Development:- It includes the learning of the language for communication and the development of various skills and abilities for the effective use of language.

Erikson’s ideas, psychology has reconceptualized the way the later periods of life are viewed. Middle and late adulthood are no longer viewed as irrelevant, because of Erikson, they are now considered active and significant times of personal growth. Erikson’s theory has good face validity. Many people find that they can relate to his theories about various stages of the life cycle through their own experiences.