Meaning of Maladjustment in Psychology

‘Maladjustment’ is a process whereby an individual is unable to satisfy his biological, psychological or social needs successfully and establishes an

‘Maladjustment’ is a process whereby an individual is unable to satisfy his biological, psychological or social needs successfully and establishes an imbalance between his personal needs and expectation of the society resulting in the disturbance of psycho-equilibrium. The term maladjustment can be refer to a wide range of social, biological and psychological conditions. 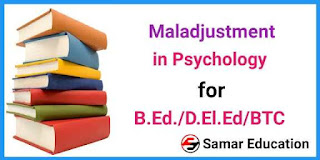 Maladjustment is a complex problem of human behaviour no single factor can be pointedly named as its cause. It is the outcome of multi factors in acting with the developing personality of the child. There are numerous factors- home, society and school which lead to maladjustment. Basic cause of maladjustment was discussed the approaches of Freud, Adler, Jung and other psycho-analysis to understand maladjustment.

1. Physique:- The physique and appearance play an important role in the social development of the child. If the child is physically weak, ugly, and has some sensory handicaps he may be shunned by others. Even the parents, make comparison in their children. Comments by parents, siblings and strangers affect the behaviour of ugly weak, handicapped children. They develop a number of problems resulting in maladjustment.

2. Long Sickness and Injury:- Long sickness of a child affects his social development and academic achievement in school.

3. Poverty:- There is a positive correlation between poverty and maladjustment in children. Highest percentage of maladjustment children come from law socio-economic conditions. But it is not necessarily true that all children who come from under privileged class are maladjustment. The crucial factor in poor home is that parents cannot even fulfil the legitimate needs of their children. Frustration of needs lead to maladjustment behaviour.

4. Broken home:- All research studies have established beyond doubt that children who come from homes that have been broken by death of parents, divorce, separation, physical or mental handicaps, of parents are often more maladjustment than children from more stable homes. Children in broken homes do not get the affection, love, sympathy and security. They are emotionally disturbed. Home which are not broken but in which there is constant conflict between parents or other members of the family also provide conditions which affect the security, affection, mental stability and fulfilment of needs of children.

5. Personal inadequacies:- In addition to physical appearance, there are certain other inadequacies in children which frustrate their needs and create constant anxiety. The parents who are ambitions and set high goals for their children irrespective of their physical and mental abilities, create frustration in their children.

2. Lack of clubs, playgrounds and liberaries:- Children need physical and mental recreational activities to fulfil their physical and mental needs. If these needs are not created, they lead to emotional tensions which are manifested in maladjustment behaviour.

3. Mobility:- Children whose family move from one place to another have to face a number of problems. This territorial migration may be one of the factors which causes maladjustment.

Maladjustment and Conditions in School

1. Inadequate training of teachers:- Teachers who are not properly trained in educational psychology and mental hygiene commit such blunders in handling children and their problems, out of ignorance of child behaviour, which may lead to maladjustment. Teacher's partiality and autocratic attitude are also important factors which create tension and anxiety in children.

2. Inadequate curriculum:- Children have several physiological social and psychological needs at different developmental stages. Needs of children are not met in our present day curriculum.

3. Lack of recreational facilities:- Children have several physiological, social and psychological needs at different development stages. Needs of children are not met in our present day curriculum. Children who court get facilities after classroom in the forms of play, library, debates, discussions etc., may manifest maladjustment.

4. Class-room climate:- If the social climate of the classroom is charged with emotions because of the relationship between the teacher and the students and students-students, it may lead to a number of problems. The author once came across a class where the students belonged to two communities, one privileged and other under-privileged. There was always constant quarreling between the two groups, resulting in leaving the school by six students.

5. Restrained relationship between administrator-teachers, teacher-teacher and student-teacher:- The pattern of relationship among the inmates of school plays an important role in creating conductive environment on the campus. If there is cooperation, mutual understanding and brotherhood then definitely it will improve the mental health of the inmates. Hardly, there are schools where such climate exists.

There is favour, partial treatment on the basis of caste, creed, region and religion, open criticism, leg pulling and authoritarian administration, the mental health of the child is affected in negative direction.

There is a difference of degrees between maladjustment and adjustment. It is a difficult to differentiate adjusted and maladjusted children only on the basis of observation in the classroom or in the school. There are certain symptoms which give some indication of maladjustment if excessively used by children. There symptoms can be divided into the following three categories.

Though detection of maladjustment requires professional skills of a psychiatrist which we cannot expect from a teacher but the teacher at the preliminary stage, can help in detecting maladjustment in the following waya:

1. Observation and interview:- The teacher can observe the behaviour of children in the classroom, outside the classroom, on the playground, library and dramaties etc. He can hold interview with those whom he suspects maladjusted and can reach definite conclusions regarding individual cases of maladjustment.

2. Use of tests:- There are a number of psychological tests, inventories and rating scales which have been developed by psychologists to screen maladjusted children. The teacher may use any of the tests to detect maladjustment: (a) Haggerty-Olson Wickman behaviour rating schedules, (b) The Bell adjustment inventory, (c) The moony checklist, (d) the Rogers test of personality adjustment, (e) Taylor anxiety scale.

Teacher is a member of larger society. He also develops maladjustment as people in society develop in modern times. There are many factors and conditions which cause maladjustment in teachers. Some of the important factors are described below:

1. Lack of professional aptitude and spirit:- In our country, teaching is accepted as a profession not because an individual is interested in teaching but because he could not get entry in other profession. Young men and women have ambitions of entering in administrative and executive posts irrespective of their personal competencies but when they are rejected from these jobs, they accept teaching as a last resort to earn their livelihood. The author used to administer a simple question to B.Ed. teacher-trainees- "Did you ever want to become a teacher? 95% trainees replied negatively. In our country, most of the teachers lack professional aptitude and devotion to their profession.

3. Extra work:- Private institutions in our country are mostly run by politicians who in time of elections employ the services of teachers for canvassing and clerical work. Not only this, but every time a dignitary comes, the teachers and the students are ordered to welcome him.

4. Lack of social prestige:- All leaders and educationists give lip sympathy to the importance of teachers. All agree that they are the builders of the future nation. The slogan sounds very sweet to the ears, but what is the importance of the teacher in the eyes of the society. The author conducted a survey to find out the importance of the teacher and represented different social situations as you have to invite 4 persons at the birth anniversary of your son, whom will you invite? You will be surprised to know that even police man and patwari were preferred to teachers. It may be due to the ignorance of illiterate parents from villages for whom police man and patwari wield more power than the teacher. Even in educated and rich classes, the social prestige of the teacher is not so high as it would have been.

5. Poor salaries:- In spite of the high cost of living, the salaries of teachers have not been increased in that proportion. As regards teachers engaged in higher education, their grade (w.e.f. 1.4.86) have been revised by some of the states. This revision of grades by UGC has given relief to the teachers and enhanced the social prestige of the profession. We can now hope that better people will join this profession.

6. High moral expectations:- The society expects that a teacher should be a saint. No doubt, the teacher must present a model of his ideal behaviour before the students for imitation. But in actual practice how many students imitate or identify with the model or ideals of the teacher, He is one of the members of society and it is natural that the evils of social environment may also affect his personality.

7. Load of work:- In our schools, load of work is too much. The teacher has to teach 7 out of 9 periods in a day. This excessive work develops emotional tensions and mental fatigue which if continued for a long period, leads to anxiety.

9. Relationship among teachers:- It is said that there are fewer conflicts among illiterates than educated persons. This idea is quite true in case of teachers. Hardly, there will be 20% schools in the country where perfect harmony, cooperation and good will exist otherwise teachers indulge in leg pulling of each other. This creates conflicts in the mind of the teacher.

10. Relationship between the administrator and teachers:- Some administrators are autocrats. They behave in official manner and impose their orders on teachers.

11. Feeling of caste, creed and religion:- On paper discrimination and partial treatment, on the basis of religion and caste, have been done away with, but the evil even exists in most of the institutions where preference is given on the basis of caste and religion and not on teaching competency of the individual. Teaches are in justly accused, maltreated and sometimes dismissed because they do not flatter the authorities or they resent against the malpractices and injustice of the authorities.

12. Insecurity of service:- There are private institutions where the teachers feel insecure. This cause anxiety in the minds of the teachers which if persists for a long period, may cause mental disturbances.