If we try to solve a problem with logic, then surely we reach some goal and solve the problem. Solving the obstacles of the problem in a logical way

Life is full of problems and man is able to solve them successfully only if he has proper experience and the art of overcoming difficulties in life. This habit may be acquired from early stages of education. As the child grows up he learns new methods of tackling problems. This habit of making efforts and solving independently the various problems prove useful in learning the various facts related with different curricular areas and also helps the child in solving actual life problems at the later stage. 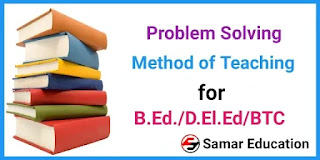 If we try to solve a problem with logic, then surely we reach some goal and solve the problem. Solving the obstacles of the problem in a logical way and achieving a goal comes under the problem solving method.

(i) According to Skinner, “Problem solving is the process of overcoming difficulties that hinder the achievement of a goal."

(ii) According to John Dewey, "Problem solving is woven into the fabric of logical thinking. The problem determines the goal and the goal controls the thinking process."

(iii) According to Risk, “Problem solving is a planned act with the aim of finding a satisfactory solution to a difficulty or complexity. It does not involve mere gathering of facts or irrational acceptance of the views of a scholar, but it is thoughtful thinking.” process."

It is clear from the above definitions that when a person deviates from the objectives or goals based on knowledge facts, then a state of tension arises in him and this tension is reduced only when its end comes in the form of a solution to that problem. In Levin's definition, the term place of life has been used. Levin's place of life refers to the environment around a person. When any difficulty arises in this area, then the problem arises in front of the person and the difficulties of the problem motivate him to solve the problem. Reaching this solution state while trying is called problem solving.

In problem solving method a systematic and orderly process is adopted for carrying out the teaching learning process. The process begins with the felt difficulty or problem. The student is then made to think out all the possible situations of the confronted problem on the basis of what does he know. Inability of finding out the solution with the help of his previous knowledge and experiences makes him to engage in serious exploration with the help of self-study, mutual discussion and independent practical work.

He tries to test one by one the possible alternatives and solutions of his problem and then by his continuous efforts get success in finding out the best of this solution may be further verified on the basis of its applicability and reliability in the solution of similar problems in other identical situations.

The problem solving method has the following steps-

1. Worry:- The first step of problem solving method is worry. In this stage, a situation is presented to the students in such a way that they feel difficulty and worried about it and they also realize that they will not be able to solve this difficulty through any predetermined method. In such a situation they will try to solve this problem or situation in a difficult way. Will be compelled to think rationally.

2. Definition:- In this second stage of problem solving method, the difficulty related to the problem is defined and it is clearly explained. There are also small problems associated with each problem. These problems are also explained in detail to the students and then the method to solve them is also prescribed. This ends the second step of the problem solving method.

4. Conjecture or Hypothesis:- In the third stage, the facts related to the solution of the problem are collected, they are analyzed in this step. In this activity all the students of the class give their support. A hypothesis is formulated about the problem solving and most of the questions that this hypothesis has been put together corroborate it. He is given the final approval and it is understood that only through this it is possible to solve the problem. This is called hypothesis. After this an attempt is made to solve the problem through this hypothesis.

5. Evaluation:- In this last step of problem solving method, its veracity is tested again by reusing the hypothesis created. To do this, the hypothesis is correlated with what has been learned and its veracity is judged and tested on the basis of prior experiences. After this comes the decision position and the problem is solved..

Keep in mind that out of these five steps, the first four steps are of the induction method and the fifth and last step is of the subtraction method. These five verses are completely intertwined and related to each other. They cannot be separated from each other.

Due to this method being student-centred, more emphasis is placed on the individual work of the students. For this reason, it is often a misconception that teachers have no special role in this method. But this thinking is absolutely meaningless and not correct. In fact, the teacher is that important link in the teaching process, in the absence of which it is not possible to complete the teaching process. In this method also the teacher has an important place. It is the teacher who effectively presents the problems to the students and creates such situations in which the student is motivated and compelled to solve the problem. The teacher also has to take care at every step that the interest of the students remains in it. The students also need the teacher's guidance while collecting the material related to the problem.

In the absence of teacher's guidance, students collect unsuitable material which is not helpful in solving the problem in any way. It is also the responsibility of the teacher to save the students from jumping to conclusions too soon on the basis of guesses. The teacher has to completely observe that the students are working in the right direction and if their direction is wrong then the teacher has to guide the students. In short, step by step teacher's guidance is very essential for the students. Therefore, it can be said that to think that there is no importance and role of teacher in problem solving method is a misconception.