The English word humanism has been derived from the Latin term 'Homo' which means human being. Thus, literally speaking, humanism is the philosophy in

The English word humanism has been derived from the Latin term 'Homo' which means human being. Thus, literally speaking, humanism is the philosophy in which man occupies a central place. Etymological meaning however, is not the sufficient meaning of a term, it includes its historical usage as well. The use of a term in the historical tradition gradually unveils the different aspects of its meaning. 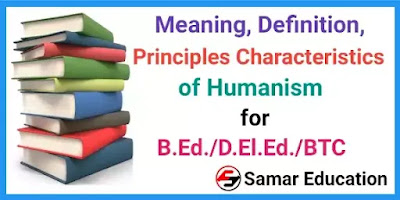 Thus, in order to understand the full implication of the term humanism one must take into account its historical evolution. In this historical evolution whatever has been found to be useful for human welfare has been attached with the concept of humanism such as the idea of social welfare, scientific attitude progress of democratic institutions, etc.

The Goals of Humanism Education

According to humanism education aims at man-making. It should be secular, rotational and scientific. It should aim at the realisation of humanist values in the individual and society. According to it the education aims at complete development of human personality. It enables man to solve individual and social problems. Its purpose is to increase efficiency and happiness of human beings. It support democratic philosophy of education since the values of liberty, equality and fraternity and fundamental human values.

Thus, the educational institutions should be based upon democratic principles. It seeks to realise peace upon the earth. The humanist tendency is rationalist and integral. It is positivist since it supports meliorism. Science alone can provide more leisure for cultural development. The individual and society are intimately related. Therefore, the children should develop team spirit and co-operation through play-way method. Community programmes should make community living easy and spontaneous. The society should be made conductive to all-round human progress.

This aim of education is based upon integral psychology. Man, according to the humanists, is a self having body as well as intellect. All these should be integrated.

(1). Importance of Man over Nature:- To Humanism, man is more important than material nature. It is because man can think and experience about material objects and material phenomena. Hence, the thinker or the one who experiences is more important than the object or the phenomena experienced. Man is endowed with intelligence and a sense of discrimination. Thus, he is not a slave of the environment as animals are but he moulds and transforms the environment for his own good and welfare of the society. In short, he creates his own world of virtue and his creativity achieves higher and higher levels of art in many areas.

(2). Importance of Personality Development:- Humanist give much importance to the 'Self' of the individual. Hence, they insist upon the fullest development of the personality of an individual. According to them, the development of personality means achievement of 'Perfections'. Plato rightly speaks that each individual has an ideal Self. He tries to develop that ideal 'Self' more and more. This is self-realization in the true sense of the term. It may be noted that self-realization means knowledge of the 'Self' or soul.

This self-realization can only be achieved in society. Hence, development of social qualities is very essential for self-realization as it expresses itself in the form of love, sympathy, fellow-feeling and co-operation for the good of all and no discrimination among human beings on any basis of caste, creed, sex, race or status, etc. It clears the fact that Idealism advocates the concept of universal education.