Etymologically the word Pragmatism is derived from the Greek word 'Pragma' which means activity or the work done. Some other scholars think that the

Etymologically the word Pragmatism is derived from the Greek word 'Pragma' which means activity or the work done. Some other scholars think that the word Pragmatism has been derived from the Greek word 'Pragmatikos' which means practicability or utility. Thus, according to this ideology great importance is laid upon practicability and utility. Pragmatists firmly hold that first the activity or experiment is done and then on the basis of results, principles or ideas are derived. 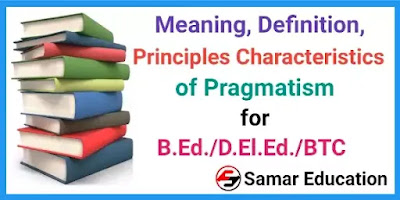 Hence, Pragmatism is also known as Experimentalism or consequentialism. It is called Experimentalism because Pragmatists believe experiment as the only criterion of Truth. To them Truth, Reality. Goodness or Badness are all relative terms. These concepts are not predetermined and absolute. They are proved by man's own experiences.

The above discussion clearly lays down that Pragmatism is very intimately connected with human life and human welfare. It is why, it is called a humanistic philosophy of life also. In a nut shell, one can say that where Naturalism is neutro-centric, idealism is psycho-centric, Pragmatism is anthropo-centric according to which, man's own experiences are the centers of reality and truth.

1. According to J. S. Ross, "Pragmatism is essentially a humanistic philosophy, maintaining that man creates his own values in the course of activity that reality is still in the making and awaits its part of completion from the future, that to a an unascertainable extent our truth are man-made products."

2. According to James B. Prett, "Pragmatism offers us a theory of meaning, a theory of truth of knowledge, and a theory of reality."

There are three forms of Pragmatism as under-

1. Humanistic Pragmatism:- According to his ideology, only those things or principles are true which satisfy the needs, requirements, aspirations and objectives of human beings and cater to the welfare of mankind. In other words, that which satisfies the human nature is only true and real. Humanistic Pragmatists believe "Whatever fulfils my purpose, satisfies my desire develops my life, is true."

3. Biological Pragmatism:- According to Biological Pragmatism, that power or capacity of human being is valuable and important which enables him to adjust with the environment or which makes him able to change his environment according to his needs and requirements. the chief protagonist of this ideology was John Dewey of America who proclaimed. "By this type of Pragmatism test is found in the function of thought, in adapting the human organism to its environment."

The following are the chief principles of Pragmatism-

1. Changing Nature of Truth:- Pragmatists do not believe in predetermined truth. According to them truth always changes according to time, place and situation. They also believe that a thing which is true to an individual at a specific time, place and situation, need not be true to others" or to anyone else at some other place or time. Hence, a certain thing which was true to a person yesterday, need not be the same for him today or will remain the same for tomorrow.

2. Truth is Formed by its Result:- According to Pragmatists, truth is not a fixed and definite entity. According to them truth is a relative term which changes according to the stages of development and situations which confront a person in his process of growth and progress. The chief reason of this is that change in situations throws up new problems to be solved by new thoughts and new efforts. Out of these thoughts only that thought of the whole lot is true which serves to solve the poroblem and attain the desired result. Hence, Pragmatism firmly hold that it is the result which goes to form or build a truth.

3. Problems as the Motives of Truth:- According to Pragmatism, human life is like a laboratory wherein each individual undertakes various experiments to solve the problems which confront him in course of his growth and development. The success of the experiment is a search d truth. Hence, problems are the motivating force for the search of truth.

4. Emphasis on Social and Democratic Values:- Pragmatism holds that man is a social being. he is born in society and all ha development takes place in through society. Hence, Pragmatists uphold social and democratic attitudes and values.

5. Emphasis on the Principles of Utility:- Pragmatism is a uitilitarian ideology which holds that the reality of a principle lies in its utility. Any idea or thing which is useful to us, is proper and right. In case it is of no use, it is improper, wrong and untrue. In other words, only those ideas and things are true which have a utility for man. In the words of William James-"It is true because it is useful."

6. Importance of Man Power:- Pragmatism attaches great importance to the power of man. By virtue of this power, a man can create an environment useful, beneficial and conducive to his own development and welfare of society.

7. Importance of Activity:- Pragmatism lays great emphasis on activity rather on ideas. Pragmatists hold the view that ideas are born out of activities. Man is an active being. He learns by his activities which he is always engaged in on his long path of life. Thus, the greatest contribution of Pragmatism to education this principle of learning by doing.

Pragmatism and Aims of Education

According to John Dewey "Education, as such, has no aim; Education is an abstract idea." Only persons have aims. And the aims of persons are indefinitely varied, differing with different children, changing as children and their teachers grow.

The above statement clearly shows that Pragmatism does not believe in fixed, pre-determined, ultimate and general aims of education to this ideology, if there can be any aim of education, this can be According to below. To Pragmatism, the only aim of education is to provide such dynamic direction and guidance to the child according to his natural interests, aptitudes and capacities in the field of academic activities that he grows up and develops more and more and is endowed with capacities to confront the ever changing problems and challenges of modern life successfully achieving a happier, a better and a richer life.

1. Principle of Utility:- The first principle of Pragmatic curriculum is the principle of utility. According to this principle, only those subjects, activities and experiences should be included in the curriculum which are useful to the present needs of the child and also meet the future expectations of adult life as well. As such Language, Physical well-being. Physical training, Geography, History, Science, Agriculture and Home Science for girls should be included in the curriculum. It must change according to the changing needs and requirements of the changing society.

The following are the main characteristics of Pragmatic education-

1. Education as Life:- Pragmatists firmly believe that old and traditional education is dead and lifeless. It provides to the child cooked up knowledge which dulls his spirit of investigation and makes him a passive 'recipient without any dynamism and push. Real knowledge can be gained only by activity, experiments and real life experiences.

2. Education as Growth:- According to Pragmatism society is undergoing a process of continual change. Education should also correspond its activities and organization to suit the changes in society. Then only education will be useful process to bring about the growth and development of individual as well as of society of which he is an integral part. It may be noted that the process of social growth today is very rapid in comparison with the conditions about sixty years ago.

3. Education as Continuous Reconstruction of Experiences:- Pragmatism holds that education is development and not mere bookish knowledge. Pragmatists firmly believe that knowledge is not fixed and pre-determined. It changes according to times and circumstances.

The above principles make it clear that Pragmatists want to construct such a flexible, dynamic and integrated curriculum which aids the developing child and the changing society more and more as the needs, demands and situations require.

Pragmatism and Methods of Teaching

As in the field of curriculum construction, so in the field of methodology, Pragmatism has contributed greatly and in very important ways. This ideology does not uphold any outdated.

According to Pragmatism, the teacher works as a friend, philosopher and guide to the children. As such, he needs two qualities namely-(1)Capacity to come into close contracts of children to know their interest and (2) Full understanding regarding the conditions and situations of changing society. According to his ideology, the teacher is expected to put before children such problems corresponding to their interests that they get busy in solving the problem and gain more and more knowledge by their own efforts. At the same time the teacher should also create such situations that all children are able to develop social interests, attitudes and habits for the welfare of whole society of which they are integral parts.

Pragmatism condemns enforced discipline and advocates social discipline based on child's interest, activities and a sense of social responsibility. According to John Dewey discipline is a sort of mental state in the formation of which social conditions play a major role. All these factors are involved in the Project Method. Pragmatism advocates the merging of play with work. This merging of play and work will develop interest and a sense of purpose in the child to do his work with joy and eagerness without interfering with the work of others.

This mental condition will infuse in hum seriousness, sincerity and consideration for others. He will develop self-confidence, self-reliance, co-operation. sympathy and fellow-feeling for others. While the development of these social qualities he will develop a sense of social discipline and moral obligation towards self and others. Hence, according to Pragmatism, the school should provide purposeful and conducive experiences to the child in a free and congenial atmosphere so that he develops a sense of social responsibility and become a true citizen in the real sense of the terms.

Pragmatists regard school as a social institution where the child gains real experiences of actual life which develop in him social sense and a sense of duty towards society and the nation. John Dewey maintains that school is a Miniature Society' where a child gets real experiences to act and behave according to his interests, aptitudes and capacities.

Group games, working in laboratories and studying in libraries with others are the various activities and experiences which inculcate in children social attitude together with a spirit of mutual help and cooperative activities. In this way, according to Pragmatism the school is not a center of education alone but it is also a community center of various activities and experiences. John Dewey rightly asserts- "School should be the true representative of society."