It is clear that, if you write Science Fiction or Fantasy, you are going to make many unusual things happen in your worlds (in the first case because

Those of you who have been reading me for a long time know that I have a certain preference for fantasy and science fiction... and if they are covered in good humor, all the better. 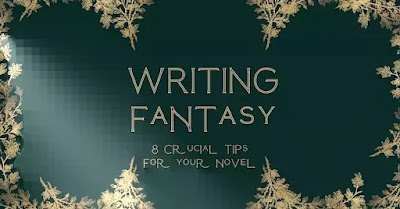 So this time I want to share with you 8 tips for writing fantasy and science fiction that I have been collecting from here and there.

1. No one will remember your protagonist if his name is Xtkhlmf'thukln

Or, in other words, name your characters in such a way that their name makes sense phonetically... unless you dedicate yourself to humorous literature (in fact, in 'His death, thank you' there is a gag on this subject).

2. Establish the rules of your world in the first act

It is clear that, if you write Science Fiction or Fantasy, you are going to make many unusual things happen in your worlds (in the first case because science and technology have not yet discovered the advances you speak of, in the second because in your world a series of special rules apply). Magic may exist, human beings may be able to travel in time thanks to advances in science or perhaps your protagonists have the gift of flying... who knows.

But, after a moment, the reader will assume that those worlds work the same as his in the rest of the aspects that you have not told him about.

Introduce as soon as possible all the aspects that differentiate the special world of your novel from our ordinary world. If possible, throughout the first act of the story.

And never, never, I repeat, never have your protagonist fly away in the final showdown of the novel, if he hasn't flown in any of its previous 300 pages.

3. Run away from clichés… but lean on them to prop up the story

We've all been told to run away from clichés, and that's excellent advice. A story full of clichés is usually synonymous with a writer who has not wanted to make an effort. And if the writer has considered that his story is not worth the effort, it would be rare for the reader to think otherwise.

But sometimes cliches are an excellent tool when it comes to giving a lot of information in a very short time. Clichés are nothing more than narrative conventions that are well established in the collective imagination of readers, and it is very legitimate to rely on these conventions if we are talking about a secondary character... as long as the rest of our novel's approach is original, of course.

Einstein said that you don't understand something until you can explain it to your grandmother.

If your novel is about a greengrocer with the soul of an artist who falls in love with a postal worker, you can complicate your language all you want. But if you're going to ask the reader to imagine an entire civilization living in space with totally different rules than we do, you'd better lower your language level… if you don't want to lose their attention before page 20!

To all this, I want to remember that lowering the language of a text or using an apparently colloquial tone is NOT making it worse.

I am very bad with names, but I remember an anecdote of an author who was told that he wrote the same as he spoke... and he replied that it had taken him many years to achieve it and that he appreciated the compliment.

5. Be succinct in your descriptions

The normal thing is that we start writing our novel only after a long planning. We will have detailed how our world works, how it's strange inhabitants speak, what their customs are, if they have some kind of mythology to support them, etc.

But it is NOT necessary for our reader to know all that. Let's remember once again that the important thing here is the story.

So, instead of overwhelming the reader with data or peculiarities, it would always be more advisable to draw 3 or 4 strokes that help them imagine that world in its entirety.

If your characters speak a foreign language, don't fill your text with lines and lines of dialect; it will be enough to slip in a word very occasionally. If they have a very different morphology from ours, don't spend pages and pages describing it in detail either; it will be better to describe some of its characteristic features vividly.

6. Every action has its reaction

Is it not so also in our world? Don't make your fantastic world less real than life itself!

7. In a world where magic exists, magic will contaminate everything

The first impulse one has when trying to create a fantasy world is to create it just like ours… and then add a series of differentiating characteristics to it.

Let's imagine, for example, that we are talking about a world in which magic exists.

Let's remember that you are who you are 24 hours a day.

8. Magic is not your story, your characters are.

They asked me recently in an interview where I had gotten the idea of filling 'His death, thank you' with hilarious footnotes and let's see if that technique had been invented by me.

I explained to the journalist on duty that no, that I had already read it to authors like Terry Pratchett or Josh Bazell, and that it is nothing more than a way of prioritizing the development of the story over all those occurrences that I considered funny, but not strictly necessary.

What do I mean by this? That our goal should always be to tell a good story, and that we shouldn't let the wonderful world we've created blind us.