Introduction, Position in the Periodic Table, General Properties of the Transition E, The Inner Transition Elements, The Lanthanoids, The Actinoids

In this chapter, we are going to study the usual and unusual properties of d-block element. Classification of elements in blocks is based on their characteristic properties. During filling of electrons, the last electron decides the block of the element. d-block contains 3 to 12 group. A number of compounds of this block elements are important catalyst in industry.

Position in the Periodic Table

The d-block of the periodic table contains the elements of group 3-12 in which the d orbitals are progressively filled in each of the four long periods. The name “transition” given to the element of d-block is only because of their position between s and p-block elements. There are four series of the transition metals 3d series (Sc to Zn), 4d series (Y to Cd) and 5d (La, Hf to Hg) and 6d series (AC, unq to Uub).

However, being the last members of three transition series, their chemistry is studied along with the chemistry of transition metals.

Electronic Configurations of the d-Block Elements

General E.C. of the d-block element is as

The d orbitals of the transition element project to the periphery of an atom more than the other orbitals (s and p). Hence, they are more influenced by the surrounding as well as affecting the atoms or molecules surrounding them.

General Properties of the Transition Elements

The transition metals (with the exception of Zn, Cd, Hg) are very much harder and have low volatility. Their melting points and boiling points are high.

In any row the melting points of these metals rise to maximum at d5 except for anamolous behaviour of Mn and Tc and fall regularly as the atomic number increases. They have high enthalpies of atomisation.

In general, ions of the same charge in given series show progressive decrease in radius with increasing atomic number. This is because the new electron enters a d orbital each time the nuclear charge increases by unity and shielding effect of d electron is not effective hence net electrostatic attraction between the nuclear charge and outer most electron increases and the ionic radius decreases.

The filling of 4f before 5d orbitals results in regular decrease in atomic radii called Lanthanoid contraction which essentially compensates for the expected increase in atomic size with increasing atomic number.

The decrease in metallic radius coupled with increase in mass results in a general increase in the density of these elements. Thus from Ti to Cu the significant increase in density may be noted.

Due to increase in nuclear charge which accompanies the filling of the inner d orbitals there is an increase in ionisation enthalpy along each series of the transition elements from left to right. However many small variations occur.

Transition metals vary widely in their chemical reactivity. Many of them are sufficiently electropositive to dissolve in mineral acid although a few are noble, it means these do not react with single acid. The metal of 3d series except Cu are relatively more reactive and are oxidised by 1M H+ though the actual rate at which these metals react with oxidising agents like hydrogen ion (H+) is some time slow.

where n is number of unpaired electron and BM–Bohr magneton.

When an electron from a lower energy d orbital is excited to higher energy d orbital, the energy of excitation corresponds to the frequency of light absorbed. This frequency absorbed generally lies in the visible region. The colour observed corresponds to the complementary colour of light absorbed. The frequency of light that is absorbed is determined by (i) Nature of ligand, (ii) Size of metal ion and (iii) Oxidation state of metal.

Due to smaller size of the metal ions high ionic charges and the availability of d orbitals for bond formation, transition elements form a number of complex compounds. Example of some complex compounds/ions are:

The transition metals and their compounds are known for their catalytic activity. This activity is ascribed to them due to their ability

Catalyst at a solid surface involve the formation of bonds between reactant molecules and atoms of the surface of catalyst. This has the effect of increasing the concentration of the reactants at the catalyst surface and also weakening of the bonds in the reacting molecules. Also because transition metal ions can change their oxidation states, they become more effective as catalyst.

Interstitial compounds are those which are formed when small atoms like H, C or N are trapped inside the crystal lattice of metals. These are usually non stochiometeric and are neither typically ionic nor covalent. For example, TiC, Mn4N, Fe3H, VH0.56 and TiH1.7 etc.

The principle physical and chemical characteristics of these compounds are :

Alloy may be homogeneous solid solution in which the atoms of one metal are distributed randomly among the atoms of the other. Such alloys are formed by atoms with metallic radii that are within about 15 percent of each other. Because of similar radii and other characterstics of transition metals alloys are readily formed by these metals. The alloys so formed are hard and have often high melting point. The best known are ferrous alloys. Cr, V, W, Mo and Mn are used for the production of a veriety of steels and stainless steel.

Preparation and Properties of the Compounds of d-Block Elements

Structure of manganate and permanganate ion 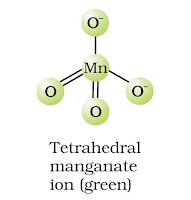 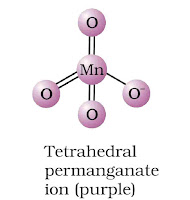 It is the most important compound of chromium. K2Cr2O7 is prepared from chromite ore (FeO.Cr2O3). The various steps involved are:

(i) Preparation of sodium chromate: The powdered ore is heated with sodium hydroxide in the presence of air, sodium chromate is formed and CO2 is given out.

(e) Reaction with H2O2: Acidified solution of dichromate ions form a deep blue colour with H2O2 due to the formation of [CrO(O2)2].

Structure of chromate and dichromate ion 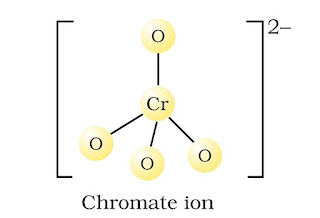 (b) Cr2O72– ion-two tetrahedra sharing one oxygen atom at one corner.

Lanthanoids resemble one another more closely than do the members of ordinary transition elements in any series. They have only one stable oxidation state and their chemistry provides an excellent opportunity to examine the effect of small size and nuclear charge along a series of otherwise similar elements.

It may be noted that the atoms of these elements have electronic configuration as 6s2 5d0 or 1 4f1–14. 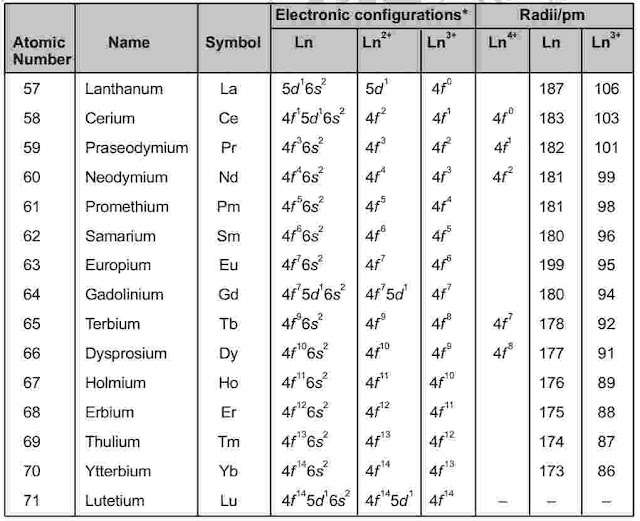 Decrease in size from La to Lu is a unique feature in chemistry of lanthanoids. This is due to lanthanoid contraction. The decrease in atomic radii is not quite regular as it is regular in M3+ ion. This contraction is similar to that observed in an ordinary transition series and is attributed to same cause, the imperfect shielding of one electron by another in the same sub-shell.

In the lanthanoids, La(II) and Ln(III) compounds are predominant. However some element may show oxidation state of III and IV. Pr, Nd, Tb and Dy can exhibit +4 O.S. only in MO2 oxide. 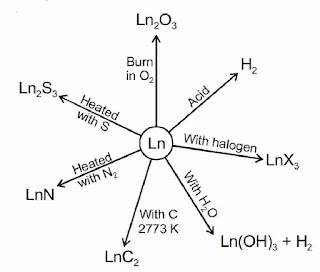 Actionid include the fourteen elements from Th to Lr. The name symbol and some properties of these element are shown as 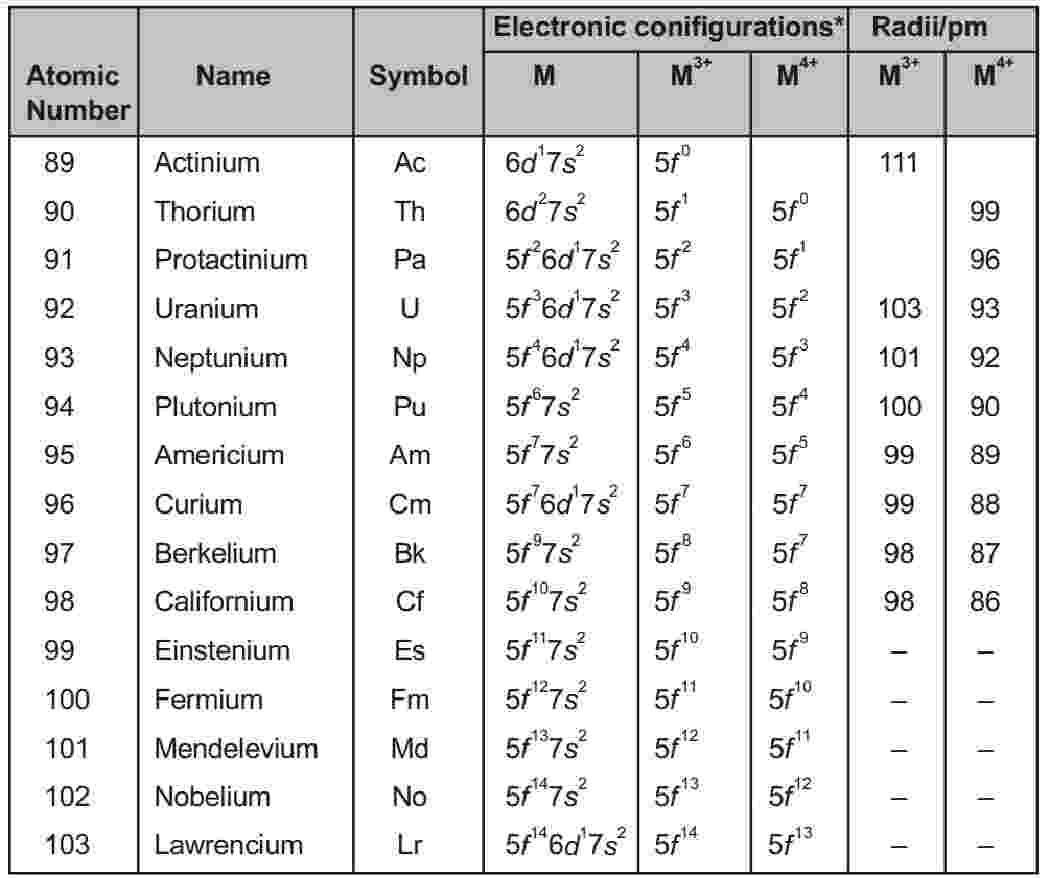 The actinoids are radioactive elements and the earlier members have relatively long half life, the latter ones have half life values ranging from a day to 3 minute for Lawrencium (Z-103).

General electronic configuration of all elements can be consulted from table. The fourteen electrons are formally added to 5f though not in thorium (Z-90) but from Pa onward the 5f orbitals are complete at element 103. The irregularities in the electronic configurations of the actinoids like those in the Lanthanoids are related to the stabilities of the f0, f7, f14 occupancies of the 5f orbitals.

There is gradual decrease in the size of atoms or M3+ ions across the series. This is referred to as actinoid contraction which is greater than lanthanoid contraction.

There is greater range of oxidation states which is in part attributed to the fact that the 5f, 6d and 7s level are of comparable energies. The elements, in first half of actinoids frequently exhibit higher oxidation states. However, +3 and +4 ions tend to hydrolyse.

Some Applications of d & f-Block Elements