In this chapter we will study the preparation, properties of dihydrogen and of some important compounds formed by hydrogen like H2O and H2O2.

Hydrogen is the first element of the periodic table. The atomic structure of hydrogen is the most simplest one with only one proton and one electron. Hydrogen occurs in its atomic form only at very high temperatures. Water is one of the most important compounds formed by hydrogen. Even its name hydrogen was given by Lavoisier because of its ability to form water as in Greek, hydro means water and gene means forming.

Position of Hydrogen in the Periodic Table

Isotopes are the different forms of the same element having same atomic number but different mass numbers. There are three isotopes of hydrogen namely protium, deuterium and tritium.

1. Protium or ordinary hydrogen (1H1): It has one proton and no neutron in the nucleus and one electron revolves around the nucleus.

2. Deuterium (1H2 or D): It is also known as heavy hydrogen. It has one proton and one neutron in the nucleus around which one electron revolves.

3. Tritium (1H3 or T): This isotope of hydrogen is radioactive and emits low energy β– particles having half life period of 12.33 years. It has one proton and two neutrons in the nucleus. The concentration of tritium is very low.

Dihydrogen is the most abundant element in the universe. It constitutes about 70% of the total mass of the universe. But its abundance in earth’s atmosphere is very less. It is just 0.15% by mass in the earth’s atmosphere. In free state hydrogen is present in volcanic gases and in the combined form it constitutes 15.4% of the earth’s crust and the oceans. However, it is also present in the plant and animal tissues, carbohydrates, proteins etc. Even hydrogen is present in mineral resources like coal and petroleum.

Hydrogen is the principal element in the solar atmosphere. It is present in the outer atmosphere of Sun and other stars of the universe like Jupiter and Saturn.

(i) In laboratory dihydrogen is prepared by the reaction of granulated zinc with dilute hydrochloric acid or dilute sulphuric acid.

(ii) Zinc reacts with aqueous alkali to give dihydrogen

(i). By the electrolysis of water : Electrolysis of acidified water using platinum electrodes is used for the bulk preparation of hydrogen.

(ii). By the action of steam on coke : Dihydrogen is prepared by passing steam over coke or hydrocarbons at high temperature (1270 K) in the presence of Nickel catalyst.

The mixture of CO(g) and H2(g) is called water gas. It is also known as synthesis gas or simply ‘syn gas’ because it is used in the synthesis of methanol and many other hydrocarbons.

Reactions with metals: Dihydrogen reacts with metals to yield hydrides at high temperature.

where M is an alkali metal.

Hydrogenation of vegetable oils: Edible oils (unsaturated) like cotton seed oil, groundnut oil are converted into solid fat (saturated) also called vegetable ghee by passing hydrogen through it in the presence of Ni at 473 K.

7. Rocket fuel: It is used as a rocket fuel for space research in the form of liquid hydrogen and liquid oxygen.

8. Fuel Cells: Dihydrogen is used in fuel cells for the generation of electrical energy.

Hydrogen combines with a large number of other elements including metals and non-metals, except noble gases to form binary compounds called hydrides. If ‘E’ is the symbol of the element then hydrides are represented as EHx(e.g., BeH2)

Based on their physical and chemical properties, the hydrides have been classified into three main categories:

Water is one of the most readily available chemical. Water is an oxide of hydrogen. It is an important component of all living organisms. Water constitutes about 65% of human body and 95% of plants. It is therefore essential for life. The ability of water to dissolve so many other substances makes it a compound of great importance. Almost three-fourth of the earth’s surface is covered with water. 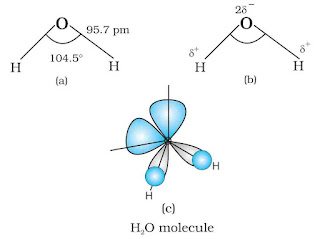 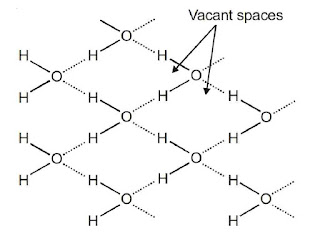 1. Amphoteric nature: Water can act both as an acid as well as a base and is thus said to be an amphoteric substance.

Water as base: Water acts as a base towards acids stronger than it as shown below,

Water as an acid: Water acts as an acid towards bases stronger than it

2. Redox reactions involving water: Water can act both as oxidising as well as reducing agent.

3. Hydrolysis reaction: Water is an excellent solvent due to its high dielectric constant (78.39). In addition, water can easily hydrolyse many ionic and covalent compounds.

4. Hydrates Formation: From aqueous solutions many salts can be crystallised as hydrated salts. Hydrates are of three types:

Hard water is the one which does not produce lather with soap easily due to the presence of calcium and magnesium salts in the form of their bicarbonates, chlorides and sulphates. For example, sea water etc.

Soft water is the one which is free from the soluble salts of calcium and magnesium. It gives lather with soap easily. For example, distilled water, rain water etc.

The process of removal of hardness from water is called softening of water.

(b) Clark’s method: In this process the calculated amount of lime is added to hard water containing bicarbonates of calcium and magnesium. It precipitates out calcium carbonate and magnesium hydroxide which are then filtered to obtain soft water.

(a) Treatment with washing soda: When calculated amount of Na2CO3 (washing soda) is added to hard water containing soluble sulphates and chlorides of calcium and magnesium, then these soluble salts get converted into insoluble carbonates which get precipitated.

Hydrogen peroxide was discovered by a French chemist J. L. Thenard. It is an important chemical used in pollution control treatment of domestic and industrial effluents.

By the action of sulphuric acid on hydrated barium peroxide

(a) Oxidising property: Hydrogen peroxide acts as an oxidising agent both in acidic as well as in alkaline medium.

(b) Reducing Property: In presence of strong oxidising agents, hydrogen peroxide behaves as a reducing agent in both the medium.

Heavy water is chemically deuterium oxide (D2O). It was discovered by Urey in 1932.