In the previous chapter we have discussed about The Hydrogen but in this chapter we will study the general characteristics of the alkali and alkaline earth metals and their compounds. We will also study the compounds of s-block elements, their uses and importance, commercially and industrially. The biological significance of sodium, potassium, calcium and magnesium will also be discussed in this chapter.

Group-1 of periodic table contains : Lithium (Li), Sodium (Na), Potassium (K), Rubidium (Rb), Caesium (Cs) and Francium (Fr). Together these elements are called alkali metals because they form hydroxides on reaction with water, which are strongly alkaline in nature.

The group-2 includes Beryllium (Be), Magnesium (Mg), Calcium (Ca), Strontium (Sr), Barium (Ba) and Radium (Ra). Except Beryllium, rest of the elements of group-2 are called the alkaline earth metals. These are called so because their oxides and hydroxides are alkaline in nature and these metal oxides are found in the earth crust.

Electronic Configuration of elements of group-1 is ns1, where n represents the valence shell. The alkali metals have one valence electron, outside the noble gas core. 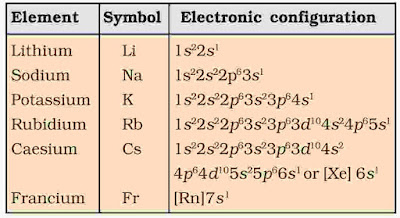 The alkali metals are highly reactive elements. The cause for their high chemical reactivity is

(i). Reaction with Air: Alkali metals burn very fast in oxygen and form different kind of oxides like monoxides, peroxides and superoxides. In all the compounds formed by alkali metals with oxygen, their oxidation state is +1.

(ii). Reaction with Water: The alkali metals on reaction with water form their respective hydroxide and dihydrogen.

(iii). Reaction with Dihydrogen: Alkali metal react with dry di-hydrogen at about 673 K (lithium at 1073 K) to form crystalline hydrides which are ionic in nature and have high melting points.

(iv). Reaction with Halogens: The alkali metals react vigorously with halogens and form halides which are ionic in nature, M+X–. But the halides of lithium are a bit covalent in nature.

(v). Reaction with Mercury: The alkali metals have strong tendency to get oxidised, that is why they act as strong reducing agents, among these lithium is the strongest and sodium is the least powerful reducing agent.

(vii). Solutions in liquid Ammonia: All alkali metals dissolve in liquid ammonia and give deep blue colour solution which are conducting in nature. These solutions contain ammoniated cations and ammoniated electrons as shown below:

Lithium shows properties which are very different from the other members of its group. This is due to the

Some important Compounds of Sodium

Sodium is highly reactive and always found in combined state. The isotope of sodium (Na) is used in detection of leukemia. The compound of sodium are given below:

Uses: It is used in

the manufacture of soap, paper, artificial silk and a number of chemicals,

Manufacture of sodium chloride is done from sea water. Sea water is allowed to dry up under summer heat in small tanks and solid crust so formed is collected.

When NaOH is treated with CO2 in presence of H2O it gives sodium bicarbonate.

The elements of group-2 are Beryllium (Be), Magnesium (Mg), Calcium (Ca), Strontium (Sr), Barium (Ba) and Radium (Ra). Except for Be, rest are known as alkaline earth metals, because they were alkaline in nature and existed in the earth.

The alkaline earth metals have 2 electrons in the s-orbital of the valence shell. Their general electroni configuration [Noble gas]ns2 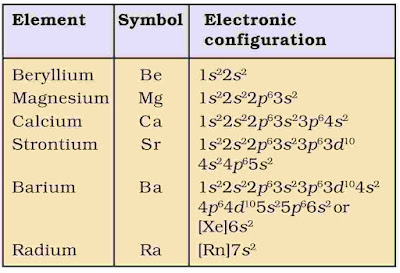 The atomic radii as well as ionic radii of the members of the family are smaller than the corresponding members of alkali metals. Within the group, the atomic and ionic radii increase with increase in atomic number.

The alkaline earth metals are silvery white, lustrous and relatively soft but harder than the alkali metals.The melting and boiling points of these metals are higher than the corresponding alkali metals.The electropositive character increases down the group from Be to Ba.Calcium, strontium and barium impart characteristic brick red, crimson and apple green colours respectively to the flame.Th alkaline earth metals just like those of alkali metals have high electrical and thermal conductivities.

(i). Reaction with water: Ca Sr, and Ba have reduction potentials similar to those of corresponding group Ist metals and are quite high in the electrochemical series. They react with cold water readily, liberating hydrogen forming metal hydroxides.

(ii). Reaction with Air: Except Be these metals are easily tarnished in air as a layer of oxide is formed on their surface. Ba in powdered form bursts into flame on exposure to air.

(iv). Reaction with oxygen: Except Ba and Ra the elements when burnt in oxygen form oxides of the type MO.

(v). Reaction with halogens: When heated with halogens the alkaline earth metals directly combine with them and form the halides of the type MX2.

Beryllium shows different behaviour from the rest members of its group and shows diagonal relationship to aluminium due to reasons discussed below.

2. On prolong treatment with CO2 milkiness disappears due to formation of Ca(HCO3)2