Reinforcement is a technique belongs to the area of psychology of learning and helps in influencing the responses or behaviours of the learners.

Meaning of the Skill of Reinforcement 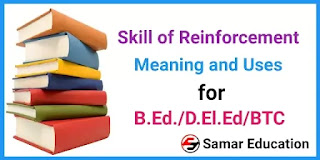 In view of the above discussion, the skill of reinforcement may be defined as the art of learning the judicious and effective use of reinforcers by a teacher for influencing the pupil's behaviour in the desired direction directed towards maximum pupils' participation for realising the better results in the teaching-learning process.

The skill of reinforcement can increase the student's involvement in learning in a number of ways. The skill is used when the teacher reinforces correct responses with a smile, when the teacher praises a good response or encourages a slow learner. Such positive reinforces strengthen desirable responses whereas negative reinforces such as scolding, punishing the students, sarcastic remarks etc. weaken the undesirable response.

The components of the skill of reinforcement may be listed as below:

Let us try to understand the meaning of these components.

1. Use of Positive Verbal Reinforcers:- Positive verbal reinforcers refer to those verbal behaviours of the teacher that bring positive reinforcement, i.e., increase the chances for the pupils to respond correctly. They may be divided in the categories like below:

2. Use of Positive Non-Verbal Reinforcers:- Positive non-verbal reinforcers refer to all those non-verbal (without words) behaviours of the teacher which bring positive reinforcement. They may be divided into the categories like below:

3. Use of the Extra Verbal Reinforcers:- This type of reinforcers fall midway between positive verbal and non-verbal reinforcers and consists of such remarks as hm-hm', 'Uh-Uh' or 'Aaa ah', etc.

1. Use of Negative Verbal Reinforcers:- Negative verbal reinforcers refer to those verbal behaviour of the teacher that bring about negative reinforcement i.e., decreasing the chances for the pupils to participate in the class-room or respond correctly. Such reinforcers may be categorized as under:

2. Use of Negative Non-Verbal Reinforcers:- Negative non-verbal reinforcers are those non-verbal behaviours of the teacher that bring about negative reinforcement. The examples of such behaviour are frowning, raising the eye-brows, hand and disapproving stares, tapping foot impatiently and walking around etc.

3. Inappropriate or Wrong use of Reinforcement:- It is only the proper and right use of the possible reinforcers that bring encouraging results. The following types of reinforcers belonging to the category of undesirable behaviour should be avoided by the teacher:

In the light of the meaning of the above discussed behaviours, a teacher is required to practice the occurrence of all the desired behaviours avoidance of the undesired ones.