Stimulus variation, i.e., variation or change in the stimuli available in the learner's environment, provides an answer. Thus, the skill of stimulus

Meaning of Skill of Stimulus Variation 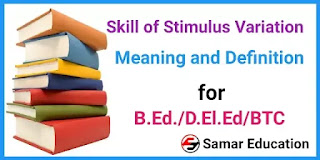 Generally, a teacher makes use of an appropriate stimulus for evoking the desired response/responses. However, a continued use of such stimulus may induce disinterest and inattention on a account of may physiological and psychological factors. This stimulus variation, i.e., variation or change in the stimuli available in the learner's environment, provides an answer. Thus, the skill of stimulus variation may be as a set of behaviours for bringing the desirable change of variation in the stimuli used to secure and sustain pupils' attention towards classroom activities.

The skill of introducing change or variation in the attention capturing stimuli in a classroom comprises the following component behaviours:

Let us know the meaning of these components.

1. Movements:- The moving objects are capable of capturing more attention than those non-moving or static. Therefore, the movement of the teacher in the class carries wide significance in securing and sustaining the pupils' attention. However, all types of movements do not bring positive results. So, a teacher while practising the skill of stimulus variation should learn to make well-planned, meaningful movements.

2. Gestures:- These are non-verbal cues provided in the oral message given by the teacher for enhancing the value of the message. They are usually made by the help of eye, hand, head, body movements, facial expression, such as extending the hands of a typical shape to indicate how big or small an object is.

3. Change in voice:- This attention-capturing behaviour of the teacher is related to the art of bringing appropriate variation or change in the tone, pitch or speed of his voice.

Focusing:- It refers to the behaviours that help in focusing the pupils' attention on a particular object, word, idea, rule or generalization. Such behaviours may take the following forms:

4. Change in interaction styles:- The communication process going inside the classroom is termed as interaction. There are three main styles of this interaction:

For bringing effectiveness in teaching a teacher should learn the art of bringing variation in interaction styles.

5. Pausing:- Pausing refers to the behaviour related with introducing silence during talk. A pause of approximately three seconds is regarded as quite effective in securing and sustaining pupils' attention.

Aural-visual switching:- This behaviour refers to the introduction of the change or variation in the use of medium e.g., (i) From aural to visual, (ii) From visual to aural or a combination of aural and visual.

Physical involvement of the students:- This behaviour involves the introduction of the change or variation in the types, forms and styles of the physical involvement of the pupils in the class. Sometimes, they may be engaged in dramatizing and other times in writing on the blackboard participating in the demonstration or handling some instrument or aid material, etc.

Table: Observation schedule-cum-rating scale for the skill of stimulus variation