Theories of Intelligence in Psychology

There are different theories about intelligence, none of which agree with each other. Every approach to thinking comes up with it’s own different

There are different theories about intelligence, none of which agree with each other. Every approach to thinking comes up with it’s own different perspective and assumptions, often contradicting at least one earlier theory. 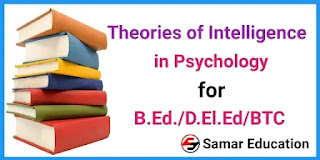 The theories of intelligence propagated by Psychologists from time to time have tried to answer this question. These theories can be grouped under two heads, namely, factor theories and cognitive theories. However, in this text we will limit our discussion to factor theories.

This theory holds that intelligence consists of one factor-simply a fund of intellectual competency, which is universal for all the activities of the individual.

A man who has vigour can move so much to East as to the West in a similar way if one has a fund of intelligence he can utilize it to any area of his life and can be as successful in one area as in the other depending upon his fund of intelligence. But in actual life situations, the ideas propagated by this theory do not fit well. We find that the children who are bright in Mathematics may, despite serious interest and hard work, not be so good in Civics. A student very good in conducting science experiments does not find himself equally competent in learning language. This makes us conclude that there is nothing like one single unitary factor in intelligence. Therefore, the unitary theory stands rejected.

The main propagator of this theory was E.L. Thorndike. As the name suggests this theory considers intelligence a combination of numerous separate elements or factors, each one being a minute element of an ability. So, there is no such things as general intelligence (a single factor) and there are only many highly independent specific abilities which go into different tasks.

In this way, Monarchic and Anarchic theories hold the two extremes. Just as we cannot assume good intelligence, a guarantee of success in all the fields of human life, we cannot also say with certain specific type of abilities one will be entirely successful in a particular area and completely unsuccessful in the other area. Actually Gardner Murphy put it. "There is a certain positive relationship between brightness in one field and brightness in another and so on. This brings us to the conclusion that there should be a common factor running through all tasks. The failure to explain such phenomena gave birth to another theory named Spearman's two factor theory.

In this way, he suggested that there is something which might be called general intelligence, a sort of general mental energy, running though all the different tasks but in addition to this general factor there are specific abilities, which make an individual able to deal with particular kinds of problems. For example an individual's performance in Hindi is partly due to his general intelligence and partly some kind of specific ability in language which he might possess i.e. g + s2, or in Mathematics his performance will be due to g + s2, in drawing it will be due to g + s3, and so on and so forth. The factor g (in lesser or greater degree) will enter in all specific activities. The total ability or intelligence of such an individual (symbolized as A), thus, will be expressed by the following equation schedule.

This two factor theory of Spearman has been criticized on various grounds. The main reasons are given below:

1. Spearman said that there are only two factors expressing intelligence but as we have seen above there are not only to but several factors (g, s1 , s2 , s3... ,etc).

2. According to Spearman each job requires some specific ability. This view was not proper as it implied that there was nothing common in the jobs except a general factor and profession such as those of nursery: compounders and doctors could not be put in a group. In fact the factors s1, s2, s3, s4...etc. are not mutually exclusive. They overlap and give birth to certain common factors.

This idea of overlapping and grouping has given origin to new theory called Group Factor Theory.

For the factors not common to all of the intellectual abilities but common to certain activities comprising a group, the term 'group factor' was suggested. Prominent among the propagators of this theory is L.L. Thurstone. While working on a test of primary mental abilities he came to the conclusion that certain mental operations have in common a primary factor which gives them psychological and functional unity and which differentiates them from other mental operations. These mental operations constitute a group factor. So, there are a number of groups of mental abilities each of which has its own primary factor. Thurstone and his associates have differentiated six such factors. They are:

This theory was propagated by G.H. Thomson, a brilliant It assumes that the mind is made of many independent bonds or elements. Any specific test on school activity sample some of these bonds. It is possible that two or more tests sample and utilize the some bonds, then a general common factor can be said to exist among them. It is also possible that some other tests sample different bonds, then the tests have nothing in common and each is specific. This theory seems to combine various theoretical view points as:

Thorndike believed that there was nothing like General Ability. Each mental activity requires an aggregate of different set of abilities. He distinguished the following four attributes of intelligence :

P.E. Vernon, a British psychologist has propagated a theory of intelligence by suggesting a hierarchical structure for the organization of human intelligence.

Thus, according to Vernon, intellectual abilities or factors of intelligence lie in hierarchical order. On top we have G, a general type of major factor representing on overall intelligence of the individual. Under G, there lie two prominent group factors namely Ved (Concerning with the verbal, numerical and educational abilities) and KM (connected with practical, mechanical, spatial and physical abilities). These two major factors may be divided with minor group factors and in turn these minor factors may be further sub-divided into various specific factors related with minute specific mental ability.

J.P. Guilford and his associates have developed a model of intellect on the basis of the factor analysis of several tests employed for testing intelligence of the human beings. They have come to the conclusion that any mental process or intellectual activity of the human being can be described in terms of three basic dimensions or parameters known as operation (the act of thinking or way of processing the information); contents (the terms in which we think or the type of information involves); and products (the ideas we come up with i.e. the fruits of a thinking).

Each of these parameters-operations, contents and products-may be further subdivided into some specific factors or elements. As a result, operations may be subdivided into 5 specific factors, contents into 5 and products into 6. The interaction of these three parameters, according to Guilford, thus results into the 5x 5x 6=150 different elements or factors in one's intelligence. In a figural form, these 150 factors or independent. abilities of the human beings along with the basic parameters and their divisions can be represented through a model named as Guilford's Model of intellect or intelligence.

In this way, according or Guilford's model of intellect, there are 150 factors operating in one's intelligence. Each one of these factors has a trigram symbol, i.e. at least one factor from each category of three parameters has to do present in any specific intellectual activity or mental task.