The word, "Idealism" may be derived from 'ideals'. Ideas or higher values are essences. They are of ultimate cosmic significance. They are more import

The word, "Idealism" may be derived from 'ideals'. Ideas or higher values are essences. They are of ultimate cosmic significance. They are more important in human life than anything else. They are eternal and unchanging. They have no dimension such as length of breadth and as such different from material forces. 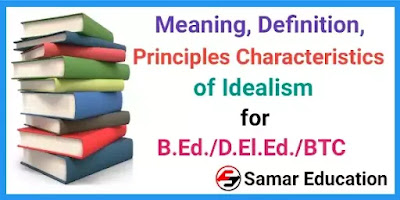 1. According to J.S. Ross, "Idealistic philosophy takes many and varied forms, but the postulate underlying all this is that mind of spirit is the essential world stuff, that the true reality is of a mental character."

2. According to Brubacher, "Idealists point out that it is mind that is central in understanding the world. To them nothing gives a greater sense of reality than the activity of mind engaged in trying to comprehend its world."

3. According to Harold Titus, "Idealism, asserts that reality consists of ideas, thoughts, minds, or selves rather than materials, objects and force."

1. Metaphysics:- Metaphysics deals with reality Idealism believes that mind is real. The basic reality consists of or closely related to mind. ideas, thoughts or selves. Mind is the controller and explainer of phenomena. World is the creation of the mind and not a natural phenomena. The universe can be comprehended through the mind, because both mind and the universe are reconstructed of the same elements, intellect and spiritual essence. Spirit is the fundamental constituent for the universe. True reality is spiritual.

2 Epistemology:- Epistemology deals with the problem of knowledge and truth. According to idealism, knowledge is the ultimate reality and that is the highest and the worthiest. Knowledge is obtained through the medium of concepts, ideas or the mind. Mind is the store house of knowledge, a reservoir. Real knowledge cannot be obtained through the methods of observation and experimentation etc.; it can be obtained with an understanding of the inner self. Pragmatists advocate that the sources of attaining knowledge are intuition, authority, revelation, meditation, and salvation, etc.

1. Priority of mind and the self:- Idealism emphasise the priority of the mind and the self. Mind, according to idealism, is prior to matter. Whereas materialism says that matter is real and mind is an accompanying phenomenon, idealism believes that mind is real and matter is in sense a by product. The basic reality consists of or is closely related to mind, ideas, thoughts or selves. Mind is the controller and the explainer of phenomena. World is the creation of the mind and not a natural phenomena.

2. The universe exists in spirit:- According to idealism, the spirit is the fundamental constituent of the universe. True reality is spiritual or thought. Thought, experience, value and personality are more real than the material things of the external world. Matter in its essence is also spiritual and every atom has life, mind and energy.

3. Distinctive nature of man:- Idealism believes that man is not a mere animal. He is a superior creation. He possesses dignity and distinctiveness. He has certain powers which are manifested in his intellectual attainments, his culture, art, morality, religion and so on. He is not a helpless creature in his environment. He has the power to mould it according to his need. According to Ross, "Human personality is supreme and constitutes the noblest work of God."

Idealism and Aims of Education

In the words of Shakespeare, man is the 'Paragon of creation'. He has in him an individuality, a pattern of self inborn with him. Education ought to make this pattern perfect. Idealism has given us very lofty aim of education. Some of the important aims of education propounded by idealists are as under:

1. Self Realisation or Exaltation of Personality:- Idealism emphasise the work of main's personality and spiritual nature. Man's soul is more important than his material structure. Man is merely soul. The entire creation is conceptual. Nature is complete in itself. There is the soul of the universe behind it. Man's soul is a part of this soul of the universe. The real structure of the soul is magnificent. The aim of human life, according to idealism, is to acquire the knowledge of the soul. Therefore, self-realisation is admitted as the aim of education according to idealism. It has been said in Indian literature that education is real education which is meant for Mukti.

Idealists do not ignore the social aspect of human personality. Social cause is inherent in the individual development. Therefore, Self-realisation involves a balance between the individual and social aims.

3. Universal education:- Idealism believes that every man is equally the noblest work of God. There should, therefore, be made no exception is the education of children. Education should be universal, without distinction of wealth or status, creed, caste or colour. It should not be for a favourite few. This is the idealistic character of universal education.

5. Development of moral sense and character:- Fourthly, the aim of education according to idealism is to develop the child's moral sense and thus enable him to distinguish right from wrong, to love good and despise evil. The goal of life as well as of education should be the realisation of moral values by developing the spiritual character of the child.

Idealists insist on emphasis being placed on the study of humanities such as literature, art, relation, morality, etc. Plato has suggested the inclusion of all those subjects of discipline which help in the realization of truth, beauty and goodness. Most significant among man's activities are the intellectual, the aesthetic and moral.

Idealism and Methods of Teaching

Idealism as a philosophy exercised more influence on the aims of education and on its general philosophy rather than on methods. It speaks of the general nature of teaching methods; it does not emphasise any particular method of teaching. Idealism has shown its indifference in the field of methods. Different idealists have adopted different methods, some of which are as under:

Idealism believes in the strict form of discipline. According to the idealists, a disciplined mind can tend towards the highest good-that is God. Truth, Beauty and Goodness are chief values of life. These values can be cultivated through disciplined mind. Discipline must be the product of our moral and cultural standard. We should be internally disciplined.

Idealism believes in that type of discipline which may make the pupil the captain of his own soul. Idealism does not believe in a discipline of external control of the military type. Force-bearing discipline is not at all permanent and desirable. It is momentary and short lived. Discipline must take the form of self-discipline, self-insight and self-analysis. Freedom is essential for discipline but that must be guided and well-versed.

Child's activities are controlled in the school. Physical punishment and external restraints are not the methods of achieving this. It is better realized through developing such qualities, as self-renunciation, obedience, humanity, politeness, etc. Froebel believes that it is better to encourage self-control and self-guidance in the child through sympathy. He believes that the child should not be sumitted to any external pressure.

Idealism and the Teacher

The place of teacher in idealism is very high. The child is not complete in himself; he is proceeding towards perfection. The teacher guides him. He carries the child from darkness to light. He can save the children from many mistakes and wastage of energy. The most precise explanation of the teacher's role has been suggested by Froebel. According to him, the school is a garden, the teacher is a cautious gardener and the child is a tender plant. The plant can grow no doubt without help but the good gardener sees that the plant grows to the finest possible perfection.

Through teacher's guidance the child can make his natural development into a process leading to perfection and beauty. Ross explains, "The naturalist may be contented with briars but the idealists wants fine roses" Idealists want fine roses to grow and they work for it. Clearly, the idealists attach more value to the teacher than the naturalists. The function of the teacher is to lead the children to their perfect development-self realization or the realization of truth, beauty and goodness.

Idealism believes that the pupil is a spiritual being. Pupils are not mere bodies without spirit. The pupil is a personality, whose foundation is not the body alone but also a deep underlying spiritual reality. According to Indian idealism, the pupil is Atma (Spiritual Self) and the function of education is to enable the pupil to recognise his real nature. The pupil is a finite soul and he has to become infinite soul through education. The pupil must obey his teacher. He must have qualities like respect towards teacher, concentration, discipline, consciousness, sense of surrender, and sense of discrimination between right and wrong, and good and bad. There must be positive and congenial relationship between teacher and taught.

Idealists attach importance to the school. This is clearly enunciated by the Froeblian metaphor i.e., the school is a garden, the teacher is a cautious gardener and the child is a tender plant. The school is a uniquely thinking institution, in the sense that it gives leadership and guidance in thinking. It is the medium through which the community expresses itself It is the mind of the society. It should transmit social and cultural heritage to the younger generation.

It should influence moral and spiritual development of children. It must provide stimulating experiences to bring into play the potentialities of the children. T.P. Nunn has glanced at the idealistic conception of the school and remarked, "The school is to consolidate the nation's spiritual strength, to maintain its historic continuity, to secure its achievements and to guarantee its future." Thus the school is a place where high spiritual ideals and values are gained through proper guidance of teacher.