Etymologically Realism means 'About a thing' or 'Concerning some object.' Hence, it is an angle of vision according to which things as we see and

Etymologically Realism means 'About a thing' or 'Concerning some object.' Hence, it is an angle of vision according to which things as we see and perceive are realities. Realists firmly hold that knowledge acquired through senses only is true. Hence, what we perceive and see by our own senses is real in nature and the only true entity of the world. 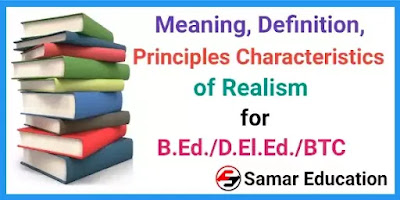 1. According to Butler, "Realism is the reinforcement of our common acceptance of this world as it appears to us."

2. According to Swami Ram Tirth, "Realism means a belief or theory which looks upon the world as it seems to us to be a mere phenomenon."

3. According to J.S. Ross, "The doctrine of realism asserts that there is a real world of things behind and corresponding to the objects of our perceptions."

The following are the four forms of Realism-

The fundamental principles of Realism are given below-

1. Phenomenal World is True:- Realists believe in the truth and reality of the matter. To them, there is no world beyond this. Hence, unlike Idealists who believe in another world, the Realists have no faith in other world beyond this life. J.S. Ross has rightly said "Realism simply affirms the existence of an external world and is therefore the antithesis of subjective Idealism."

2. Senses are the Doors of Knowledge:- Realism believes that senses are the doors or gateways of knowledge. The impressions and sensations which result from our contacts with external world through our senses result in knowledge which is true and real. The neo-realist Bertrand Russell, in his book 'Analysis of Mind', writes- "I contend that ultimate constituent of matter are not atoms... but sensation. 1 believe that the stuff of our mental life... consists wholly of sensations and images."

3. Theory of Organism:- According to Realists conscious and unconscious things form an organism. Thus, Whitehead writes "The universe is a vibrating organism in the process of evolution. Change is the fundamental feature of this vibrating universe. The very essence of real actuality is process. Mind must be regarded as the function of the organism."

4. Opposition of Idealism:- There is no place for imagination in Realism at all. Thus, Realista assert that there are no such entities as God, Soul or the other world. They are mere figments of human imagination. Hence, having no faith in the existence of God, Soul and their interrelationship, Realists assert that the scientific realities of matter and its attributes are true and real.

The chief characteristics of realistic education are given below-

1. Based on Science:- The supporters of Realism emphasized the importance of useful and purposive education. They advocated the inclusion of scientific subjects in the curriculum and in place of academic and artificial education, they laid stress on the natural education which gave birth to Naturalism. Thus, the emphasis on scientific education is the first characteristic of realistic education.

2. Emphasis on Present Life of Child:- The second characteristic of realistic education is to make the present life of child as the focal point of educational system. As we know the fact that Realism was born as a reaction to excessive Idealism, it opposed the academic education of mere ideals and values and emphasized the immediate real and practical problems of day to day living which only can promote individual good and welfare. In other words, the present life of the child is the centre of all ducational activities.

3. Emphasis on Experiment and Applied Life:- The third characteristic of realistic education is emphasis on experiments, experiences and application of knowledge learnt. It lays great stress on learning by doing, by developing creativity and urge of practical work in children so that they are able to solve their immediate practical problems and read a real successful life.

4. Opposition of Bookish Knowledge:- Realists decry mere academic, theoretical and bookish knowledge which develops only rote memory and encourages cramming. It does not enable the child to understand the realisties of external things and natural phenomena. According of Realists, education should inculcate in the child an understanding of both the things and the environment. Thus, the slogan of realistic education is 'Not words but things. Such type of education promotes intelligence and a sense of judgement which the bookish education does not do.

Realism and Aims of Education

The following are the aims of realistic education-

1. Preparing the Child for a Happy and Successful Life:- The first aim of realistic education is to prepare the chiled to lead successful and happy life. Thus, education should be such that the child is able to solve his problems of life successfully and lead a happy life promoting the welfare of society as well.

3. Developing the Physical and Mental Powers of Child:- According to Realism, mind as well as the physical organs together constitute an organism composed of matter. Hence, according to this idealogy, the third aim of education is to develop the physical and mental powers of the child so that with the help of his developed intelligence, discrimination and judgement, he is able to solve all the problems of life successfully.

5. Acquainting the Child with Nature and Social Environment:- According to Realism, a child is related both to the external nature and the social environment. Hence, the fifth aim of education is to provide the child full knowledge of both the society and the external Nature so that he is above to strike a balance between the two.

6. Imparting Vocational Education:- According to Realism, education should be to practical utility of child. Since the problem of livelihood is the main problem of life these days, so according to this ideology, the sixth aim of education is to provide vocational education to the child.

Realists insisted that only those subjects and activities should be included in the curriculum which prepare children for actual day to day living. Accordingly, considering the real situations, conditions and circumstances of the present day life of human beings, realists emphasized to give prime place to Nature, Science and vocational subjects whereas secondary place to Arts, Literature and Languages.

It is to be noted that Realists have recommended about thirty subjects for the curriculum. They have also advocated free choosing by the children from among these subjects. At the same time they have made clear that teaching of mother-tongue is the foundation of all development and vocational subjects which are essential for livelihood. Hence, the essential subjects in the curriculum should be language and vocational subjects.

Realism and Methods of Teaching

Traditional system of education gave to the child only bookish knowledge which was purely academic and wordy. Hence, it failed to prepare the child for real life. Realists changed that system of teaching to gain knowledge through sense according to the child's nature and capacity by way of observation and experience.

Emphasizing that objects are real, the Realists insisted to impart knowledge of objects and external phenomena through senses. In their opinion objects should be first shown and allowed to be handled if need be arise and then only they be interpreted and explained to the child. This encouraged the use of audio-visual aids in education.

The role of teacher according to Realists is neither as high and important as the Idealists advocate nor so negligible as the Naturalists speak out, it is fairly important. The teacher, according to Realists, is expected to have full knowledge of the content and the needs of children. Not only this, he must also be capable to present before children the content in a clear and intelligible way by employing psychological and scientific methods.

It is the duty of teacher to tell children about scientific discoveries, researches and inventions by others in various fields of knowledge. He himself should also be engaged in some research work or experimentation. At the same time he must inspire children to undertake wide and close observation and experimentation themselves so that they are able to find out new facts. Not only this, the teacher must understand well the amount of knowledge-to be provided to each child at a specific time. Hence, Realists insist upon the training of teachers before they engage themselves in the teaching work in an effective way.

Realists emphasize moral and religious education of the child. For this type of education, discipline is essential and a pre-requisite condition. But what type of discipline? The upholders of this ideology decry repressionistic discipline. They advocate self-discipline of effective smooth adjustment of the child with external environment, the teacher only inspiring and encouraging sympathetically. According to Comenius the school should be like the lap of mother, full of affection, love and sympathy. In short, Realists advocate a synthetic form of impressionistic and emancipatory forms of discipline.

Realism has different views about school. Some realists do not feel any need of school at all. They prescribe wide travelling, tours and teaching by private tutors as the best means of education. On the contrary, other Realists emphasize the importance of school and class teaching. They regard school as a mirror of society reflecting its true state of affairs. As such, the school should not only include, in its work, all the activities going on in society, but it should also be well-furnished and equipped with all the necessary aids and devices for effective observation and experimentation by children.

According to them, the school in an agency which meets the needs of the child and the demands of society as well. In short, it is school only which provides for the fullest development of the child according to his nature and needs. Not only this, school is the only agency to provide vocational education to prepare the child for some livelihood. In the words of Comenius "School are true foregoing places of men."

1. Realism in metaphysics:- Realism believes that the universe is made of dynamic matter. We can identify the regular activities of the world on the basis of our experiences. Matter is in motion and exists therefore it is true.

2. Realism in epistemology:- Realists believe that the real world exists. We know the real thing because it exists. We can say that if the object exists in the real world then it is true. Any statement is acceptable only after analysis. The mind accepts the existence of knowledge.

3. Realism in Values:- Realists believe in natural laws. They say that a person can lead a virtuous life by following these rules. Nature is full of beauty. A beautiful art-work is a reflection of the order and logic of the universe or nature. Art should be appreciated.