Maxims and Phases of Teaching

To be so, successful teaching is based on certain time-honoured maxims which are evolved as a result of long experience in a teaching and research

Successful teaching is not a haphazard process. It is a planned and implemented set of activities occurring in an international and social setting with a specified goal of achieving learning of various forms and levels. It is the task of teacher to perform various activities, to produce change in student behaviour. To be so, successful teaching is based on certain time-honoured maxims which are evolved as a result of long experience in a teaching and research in the educational psychology. These have been framed keeping the child in the forefront. 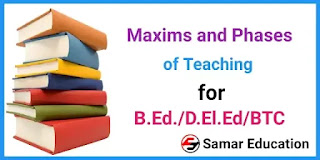 Some of the important maxims of teaching are as under:

1. Proceed from Simple to Complex:- The subject-matter of the lesson should be arranged in such a way that easier ideas are used as a starting point and difficult one follow them. Simple means that idea which - involves a single concept or even a sub-concept and can be understood as a whole. If a teaching point is complex, it should be broken into simpler components and each should be presented one after the other.

2. Proceed from concrete to Abstract:- The natural way of teaching a lesson is to proceed from concrete concepts to abstract concepts. Suppose you want to teach addition, subtraction or multiplication to younger children, use beads, chalks or sticks for teaching computational skills.

3. Proceed from whole to Parts:- This is the basis of Genalt Psychology. A teacher should always perceive the whole thing first and then pay attention to its parts, e.g., while teaching a poem, the child should first be given an idea of the whole poem.

4. Proceed from Indefinite to Definite:- Vagueness characterises the early ideas of children and the aim of teaching is to make these clear and precise. The teacher should first diagnose those concepts, rules or other things which are vague in their minds, then he should explain them with illustrations, examples and by using analogies or teaching aids so as to make the concept or rule clear and precise. By this activity indefinite ideas will become definite.

6. Proceed from known to Unknown:- For effective teaching the procedure of sequencing the subject-matter should follow the maxim of known to unknown. The purpose of using what is known is to show them its resemblances with and difference from the things which they are going to learn. Through this process learner will be able to associate the new information with the already known knowledge, because learning takes place through associations and assimilations.

7. Proceed from Particular to General:- The teacher should start with specific and particular examples or facts. Specific examples should lead to generalisations. The criterion of effective teaching is that the children should be able to frame correct generalisations for themselves through experimentation and keen observations. The derivation of rules, principles and laws in subjects like sciences; mathematics, geography etc. are based on this maxim of proceeding from particular instances to general rules. On this maxim is based the inductive method of teaching.

10. From Psychological to Logical:- According to this maxim, the child should first be taught psychologically and then logically. In other words, child's education should be started according to his aptitude, age, courage, capacity, tendency, eagerness etc. It should be started with a subject which is before him. When his age, knowledge and mind-develop, logical education may be imparted about that thing. The degree of logical teaching should be increased according to the increase in his age, mind and knowledge.

11. From Empirical to Rational:- When a child attains knowledge by using or observing a thing, this is called empirical knowledge. When a teacher explains it to him by logic and prescribes a principle, it is called rational. When a child, who lives in plains, goes to a hill he sees vapour in the atmosphere. Sometimes the vapour enters his room. The child can know about the vapour and may also draw the conclusions that vapour forms in the hills. But when the teacher explains him as to how and whey the vapour forms, the child will be able to understand the cause of the vapour and its formation in the hills-alone and not in the plains. In this way the Child's knowledge about the vapour will be rational.

1. Pre active phase (planning stage):- This phase accounts for a pre-estimated idea before coming to the classroom. It includes a very good estimated pre-plan of understanding the class with a "good lesson plan." Lesson plan preparation includes:

2. Inter active phase (presentations phase):- This is concerned with all activities and behaviour and manifested by the teacher in and after entering the classroom during the process of presenting the content. The operation included at this stage is:

3. Post active phase (evaluation phase):- This phase of teaching accounts for the concept achieved after the classroom situation undertaken by the teacher which led to the achievement of objectives as estimated earlier. This stage may also be undertaken by just mere observation. It included