The word personality itself stems from the Latin word 'personal', which refers to a theatrical mask worn by performers in order to either project

The word personality itself stems from the Latin word 'personal', which refers to a theatrical mask worn by performers in order to either project different roles or disguise their identities. At its most basic, personality is the characteristic patterns of thoughts, feelings, and behaviors that make a person unique. It is believed that personality arises from within the individual and remains fairly consistent throughout life. 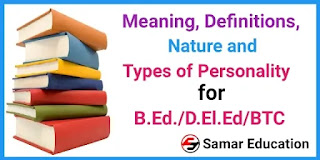 It is the totality of one's behaviour towards oneself and others as well. It includes everything about the person, his physical, emotional, social, mental and spiritual make-up. It is all that a person has about him.

(1) According to Watson, "Personality is the sum of activities that can be discovered by actual observations over a long enough period of time to give reliable information." In this manner Watson gives emphasis upon the behaviour of an individual and say that personality is nothing but the useful effect one makes upon the person coming into his close contact.

(2) According to Morton Prince, "Personality is the sum total of all the biological innate dispositions, impulses, tendencies, appetites and instincts of the individual and the dispositions and tendencies acquired by experience.

(3) According to Allport, "Personality is a dynamic organisation within the individual of those Psychophysical systems that determine his unique adjustment to his environment."

(4) According to R.B. Cattell, "Personality is that which permits a prediction of what a person will do in a given situation."

Traits and patterns of thought and emotion play important roles as well as the following fundamental characteristics of personality:

1. Consistency:- There is generally a recognizable order and regularity to behaviors. Essentially, people act in the same ways or similar ways in a variety of situations.

2. Psychological and physiological:- Personality is a psychological construct, but research suggests that it is also influenced by biological processes and needs.

3. Behaviors and actions:- Personality not only influences how we move and respond in our environment, but it also causes us to act in certain ways.

4. Multiple expressions:- Personality is displayed in more than just behavior. It can also be seen in our thoughts, feelings, close relationships, and other social interactions.

Type theories are the early perspectives on personality. These theories suggested that there are a limited number of "personality types" that are related to biological influences, including:

Trait theories tend to view personality as the result of internal characteristics that are genetically based and include:

Assessment is an end result of gathering information intended to advance psychological theory and research and to increase the probability that wise decisions will be made in applied settings e.g., in selecting the most promising people from a group of job applicants.

The approach taken by the specialist in personality assessment is based on the assumption that much of the observable variability in behaviour from one person to another results from differences in the extent to which individuals possess particular underlying personal characteristics (traits). The assessment specialist seeks to define these traits, to measure them objectively, and to relate them to socially significant aspects of behaviour.

It is convenient to use a number of terans to refer to certain components of aspects of personality that we may wish to evaluate. These terms and the meaning that attach to them are discussed briefly below:

1. Character:- Character traits are aspects of individual behaviour to which definite social value has been attached. Honesty, cooperativeness, thrift, kindliness and loyalty are all labels for social virtues. Educational and religious organization have always been concerned with the inculcation of such virtues.

2. Adjustment:- Educationists and psychologists have long been concerned with the concept of adjustment. The mental hygiene approach as applied both in and out of school has striven to develop "well-adjusted personalities". Maladjustment it recognized in individuals fail to fit into the social group or who appear to live unhappy and unproductive lives.

3. Temperament:- From early days observers of human nature have noted conspicuous differences is energy level, prevailing mood, and general style of life. Literary men and men of science a like have proposed systems.

4. Interest:- The individual makes a variety of choices with respect to the activities in which he engages. He shows preferences for some, aversion to others. Appraising these tendencies to seek or avoid particular activities constitutes the domain of interest measurement.

5. Attitude:- The individual responds with enthusiasm and aversion not only toward activities but also to social groups, social institutions, and the other aspects of his world. These reactions with their various ramifications, constitute the individual's constellation of attitudes.

(1) The theories which adopt type-approach:- The viewpoints of Hippocrates, Krestschmer, Sheldon and Jung belong to this category. They hold that human personalities can be classified into a few clearly defined types and each person can be put in one or the other types according to his personality traits.

(2) The theories which adopt trait-approach:- Worth mentioning in this category is Cattell's theory of personality. This approach believes in the mathematical analysis and quantification of the personality constituents and helps in the prediction of human behaviour in a particular situation.

(3) The theories which adopt types as well as trait approach:- Eysenck's theory of personality belongs to this category. He goes a step ahead to the approach adopted by Cattell. He does not only mention the personality traits for assessing one's personality but also tries to give definite personality types.