A teacher has to learn the skill of explaining in order to make the pupils understand many ideas, concepts or principles, that need explanation.

Skill of Explaining: Meaning of the skill

A teacher has to learn the skill of explaining in order to make the pupils understand many ideas, concepts or principles, that need explanation. Explanation is nothing but a few interrelated appropriate statements. Thus, the skill of explaining may be defined as the art of learning the use of interrelated appropriate statements by the teacher for making the pupils understand the desired concept, phenomenon and principle. It is, by all means, a verbal skill and has two main aspect: 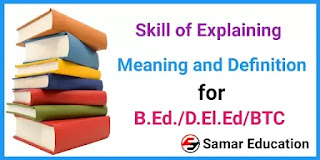 The statements are generally of three types: the descriptive, the interpretive, and the reason giving.

TABLE: Components of the skill of explaining

Let us now understand the meaning of these component behaviours.

2. Using explaining links:- The explaining links in the form of words and phrases are meant for establishing links or continuity in the statements used for explaining a concept, phenomenon or principle. Some of these linking words and phrases generally used for explaining are therefore, hence, thus, consequently, since, because, so that, in spite of as a result of, the function of, the purpose of, the cause of, due to, that, is why, this is how, in order to, in order that, on the other hand, why, while, etc.

4. Testing pupil's understanding:- This involves asking appropriate questions to the pupils to ascertain whether the purpose of explaining the concept or principle has been achieved or not.

1. Using irrelevant statements:- This behaviour covers the statements not related to the concept or principle being explained. These statements, instead of helping the pupils to understand the concept, create confusion and distract the attention of the pupils.

2. Lacking continuity in statements:- It involves a missing link or break in the logical sequence of the interrelated statement by the teacher for explaining a concept or phenomenon.

3. Lacking fluency:- Fluency relates to the slow of uninterrupted statements for explaining a concept or principle. In case a teacher lacks fluency, he may be seen to show the following types of behaviours:

Table: Observation schedule-cum-rating scale for the skill of explaining