Meaning, Defintions and Nature of Social Intelligence in Psychology

Intelligence is the ability to acquire and apply knowledge. Intelligence is defined as mental capability that involves the ability to reason, to plan, to solve problems, to think abstractly, to comprehend complex ideas, to learn quickly and to learn from experience. It is not merely book learning, a narrow academic skill, or test-taking smartness. 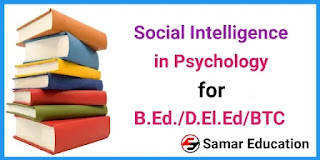 Social intelligence is the capacity to know oneself and to know others. Social Intelligence develops from experience with people and learning from success and failures in social settings. It is more commonly referred to as "tact", "common sense", or "street smarts".

An individual's potential in life can be measured and predicated by a single number- his or a her 'IQ' Score- has lost a great deal of credibility now a days. To day it is almost believed and accepted that one's intelligence is multidimensional and there lies certainly key role for the intelligence like emotional intelligence and social intelligence in life.

1. According to Ross Honeywill, "Social intelligence is an aggregated measure of self- and social-awareness, evolved social beliefs and attitudes, and a capacity and appetite to manage complex social change.

2. According to Edward Thorndike, "the ability to understand and manage men and women and boys and girls, to act wisely in human relations".

1. Verbal Fluency and Conversational Skills:- You can easily spot someone with lots of SI at a party or social gathering because he or she knows how to “work the room.” The highly socially intelligent person can carry on conversations with a wide variety of people, and is tactful and appropriate in what is said. Combined, these represent what are called “social expressiveness skills.”

2. Knowledge of Social Roles, Rules, and Scripts:- Socially intelligent individuals learn how to play various social roles. They are also well versed in the informal rules, or “norms,” that govern social interaction. In other words, they “know how to play the game” of social interaction. As a result, they come off as socially sophisticated and wise.

3. Effective Listening Skills:- Socially intelligent persons are great listeners. As a result, others come away from an interaction with an SI person feeling as if they had a good “connection” with him or her.

5. Role Playing and Social Self-Efficacy:- The socially intelligent person knows how to play different social roles- allowing him or her to feel comfortable with all types of people. As a result, the SI individual feels socially self-confident and effective- what psychologists call “social self-efficacy.”

6. Impression Management Skills:- Persons with SI are concerned with the impression they are making on others. They engage in what I call the “Dangerous Art of Impression Management,” which is a delicate balance between managing and controlling the image you portray to others and being reasonably “authentic” and letting others see the true self. This is perhaps the most complex element of social intelligence.

Historically the upsurge of the idea and concept of social intelligence owes its origin to the view point expressed by Edward Thorndike in 1920 in his definition worded below:

Intelligence may be defined as the ability to understand and manage men and women, boys and girls to act wisely in human relations.

Later on Thorndike's viewpoint was affirmed by the scholars Moss and Hunt in 1927 in their defining social intelligence as the ability to get along with others.

However it was Vernon who might be credited to provide the most wide ranging definition? Of the term social intelligence by terming it as the person's "ability to get along with people in general, social technique or ease in society, knowledge of social matters, susceptibility to stimuli from other members of group as well as insight in to the temporary moods or underlying personality traits of strangers." Later on a major push and support for the up bringing of the concept of social intelligence has been received by the concept and theory of multiple intelligence put forward by the famous psychologist Howard Gardner. In his theory he has pointed out social intelligence as one of the eight intelligences of human being in the name of interpersonal intelligence.

Gardner as we have seen has proposed that intelligence is not a unitary cognitive ability but there are eight quite different types of intelligence each hypothetically dissociable from the others and end hypothetically associated with a different brain system. While most of these proposed intelligence (linguistic, logical-mathematical, spatial, musical, bodily kinesthetic etc.) are cognitive abilities much like the Thurstone's primary mental abilities, two are explicitly personal and social in nature. Gardner defines intrapersonal intelligences as the person's ability to gain access to his or her own internal emotional life and inter personal intelligence the individual's ability to notice and make distinction among other individuals.