Meaning and Definition of Culture | Enculturation and Acculturation

In the narrow sense culture means that man-made social organization which promotes specific habits of thinking and living, specific habits of social interaction, specific ways of eating, dressing and living, religious and scientific beliefs and various material objects together with political and social customs, traditions and patterns of behaviour which cumulatively satisfy the various needs of human beings. In its wider sense, culture refers to all inclusive habits of thinking which shape human behaviour in all its aspects and in all fields of human activity. 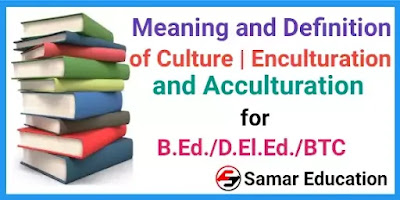 (1). According to Tylor, "Culture is the complex whole which includes knowledge, belief, art, morals, law, custom and other capacities and habits acquired by man as a member of the society."

(2). According to MacIver, "Culture is the expression of our nature in our modes of living and of thinking in our every day intercourse in art, in literature, in religion, in reaction and enjoyments."

(3). According to Biersted, "Culture is that complex whole that consists of every thing we think, do and have as members of society."

In each society, culture is of two type as under-

(1) Material Culture:- Material culture includes all those man-made things and objects which human society has created for its physical welfare in times of peace and war. Items such as clothes, utensils, homes roads, ornaments, T.V., radio, various machines, gadgets and various means of transport and communication are some examples of material culture.

Nature and Characteristics of Culture

Although not all scholars are unanimous in relation to the concept of culture in principle, but all are unanimous regarding its practical side, here we will present the same in the form of its nature and characteristics-

The importance of culture can be explained as follows-

(1). Helpful in learning the art of living:- Culture reduces the life struggles of a person and gives him the ability to adjust to the environment and thus the person is successful in living a happy life.

(3). Helpful in the formation of personality:- As the child grows up, the area of ​​his society becomes wider. He comes in contact with family first, then neighbourhood, then village, town, state, country and the world. As contacts grow, he gets unique experiences which he makes a part of his life. These experiences have a profound effect on his personality and thus his personality is formed.

(4). Helpful in socialization:- The culture of a society is rooted in its ethics, behaviour, beliefs, traditions and beliefs which are also the basis of socialization. This is how culture socializes the individual.

(5). Helpful in adaptation:- Geographical conditions, composition of society, etc. contribute a lot in the formation of culture. A person tries to adapt nature for his own pleasure and thus he gets a lot of help from culture in arranging himself from this environment.

(7). Helpful in determining the nature of national language:- Language is the basis of culture. Arabic, Persian and Urdu were given importance for the development of Islamic culture during the Muslim period. Urdu was made the language of business, English was encouraged by the British for the development of western culture. Hindi language has been accepted as the national language for the propagation of Indian culture in independent India.

Education and culture are closely related to each other. In this regard Brameld says, "Education is directly formed from the content of culture and this material gives education not only its own instrument but also the reason for its existence."

A. Impact of Culture on Education

Today the education of any society depends on its religion, philosophy, its nature, its governance, its economy, psychological discoveries and scientific inventions. These are called philosophical, sociological, political, economic, psychological and scientific basis of education, in other words. The most influential element in the sociological bases is the culture of a particular society. This effect is as follows-

(1). The effect of culture on the aims of education:- the ways of living and eating habits of a particular society, behavior, customs, traditions, religious beliefs, art, law, morality, literature, music, language, ideas, beliefs , ideals and values etc. include all that is known as social heritage. Man is a social animal and his needs and aspirations are according to the culture of the society. The aim of education of the society whose culture is spiritual is also the spiritual progress and development of the children. In this way, the culture of any society deeply affects the aims of education of that society.

(5). Effect of culture on school:- School is said to be a miniature form of society. Therefore schools are the center of the culture of a particular society. The school building, school system, school activities and the entire environment of the school are according to the culture there. For example, where public schools like Sophia, St. Mary's etc. are influenced by Christian culture, Saraswati Shishu Mandir, Vivekananda Vidyalaya, Ramtirth Sansthan, and Gurukul develop Indian culture.

B. Impact of Education on Culture

(2). Education transfers culture:- Education not only preserves culture but also transfers it to the new generation. Culture maintains its existence only because of education. Education gives immortality to culture by transferring culture from one generation to another.

(3). Education develops culture:- although every society wants to preserve its culture in the way it receives it. But there are constant changes taking place in the society, it moves towards continuous development. In such a situation, the task of education is to bring the desired change in the culture and orient it towards development. It is the responsibility of education to develop and make useful the discipline, culture of the era and time.

Enculturation is the process by which people learn the requirements of their surrounding culture and acquire values and behaviours appropriate or necessary in that culture. As part of this process, the influences that limit, direct, or shape the individual include parents, other adults, and peers. If successful. enculturation results in competence in the language, values, and rituals of the culture.

Enculturation is related to socialization. In some academic fields, socialization refers to the deliberate shaping of the individual. In others, the word may cover both deliberate and informal enculturation. Enculturation is the process where the culture that is currently established teaches an individual the accepted norms and values of the culture or society where the individual lives. The individual can become an accepted member and fulfill the needed functions and roles of the group, Most importantly the individual knows and establishes a context of boundaries and accepted behavior that dictates what is acceptable and not acceptable within the framework of that society.

Those phenomena which result when groups of individuals having different cultures come into continuous first-hand contact, with subsequent changes in the original cultural patterns of either or both groups under this definition acculturation is to be distinguished from assimilation, which is at times a phase of acculturation.

The culture of any country is the result of the spiritual practice of the people of that country. It separates and elevates humans from other creatures. As far as the culture of our country India is concerned, many cultures have developed here, but when we talk about Indian culture, we mean "Indian Aryan culture" which is continuing from Vedic times till now. . Indian culture is the oldest culture in the world and the richest culture. This culture of ours is a culture of auspiciousness, good luck and welfare of the entire human race. It was he who first taught the lesson of "Vasudeva Kutumbakam" to man. It was this which first led us towards "Sarve Bhavantu Sukhina". It is our Indian culture that teaches man to live not only for the society and the nation but for the whole world.

Our Indian culture has been spiritual and religion-oriented since the beginning. Our way of living, eating habits, customs, values and pickle-ideas have all been based on religion. This culture of ours is a culture of four Varnas (Brahmin, Kshatriya, Vaishya and Shudra), a culture of four Purusharthas (Dharma, Artha, Kama and Moksha), five Mahavratas (Truth, Ahinsa, Astaya, Aparigraha and Brahmacharya), There is a culture of abstaining from the five doshas (kama, anger, greed, delusion and item) and 16 sacraments (punsavan, seamantonnayan, jatkarma, naming, nishkraman, annaprashan, chudakarma, karnavedha, upanayana, vedaarambh, samvartana, marriage, grihasthashrama, vanaprastha). Ashram is a culture of Sanyasashrama and Anyeshti). Once in our country, the same person was considered to be cultured, who passed through the chain of the first 12 sanskars. Hospitality is another great feature of our Indian culture.