Modernization is the process of bringing about a change, which means that there is a change in the process of society based on science and technology. 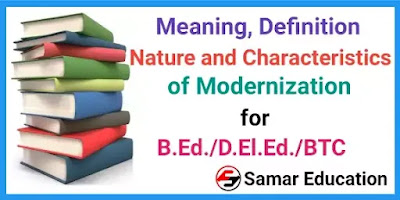 The meaning of modernization is different for each. For the common man, it means collecting and using the amenities. Industrialization is modernization for the illiterate rural person. For the sociologist it is a process due to which different societies can be differentiated. From an economist's point of view, it means a process by which a society tries to make the most of the available resources by using new technology, so that economic development can take place. From the point of view of the historian, it is such a process due to which a person acquires new knowledge and on the basis of it changes his way of life and thinking.

Nature and Characteristics of Modernization

Role of Education in Modernization

The Kothari Commission (1964-66) laid emphasis on modernization and considered their main means of education. According to this commission, if the country is to be empowered, then modernization will have to be adopted, then only India will be able to become a huge modern democratic nation. In 1986, Prime Minister Shri Rajiv Gandhi also gave importance to modernization in the new education policy.

Way to Modernize through Education

Objectives of Modernization and Education

Following are the objectives of education in the process of modernization-

Modernization, obviously, entails social change. As a consequence of this change, the new organizations are replacing the old, new groups and new trends are emerging. While this leads to progress in various fields, it also gives rise to many problems. The social change promotes social disintegration. There is class war and counter-revolutionary movements come into being. In India, as a consequence of modernization, there is individual and family disintegration. The joint family system is breaking down and it is being replaced by nuclear families.

Due to modern tendencies the basis of marriage has ceased to be religious; it is now a social and psychological bond. The incidence of divorce is increasing. The ideas about propriety in sexual relations are also undergoing change. As the opportunities of get together between sexes are increasing there are many instances of violation of traditional ethical values. The unemployment problem is also a result of modernization. While on the one hand, there come into existence new industries, the traditional trades become obsolete. This throws many persons out of employment. There is also the problem of adequate use of leisure.

Impact of Modernization in India

The impact of modernization is as follows-

(2) Urbanization:- The fast growth of population of this country in the last 50 years has lead to fast urbanization in India. The fast industrialization and consequent urbanization has led to many ticklish problems like slums, crimes etc. In order to solve these problems. town-planning is imperative.

(3) Secularization:- Secularization is a consequence of urbanization. The people of India have adopted the ideal of secularism according to which every body is free to follow the religion of his choice. The modern society is pluralist. The compassion and tolerance are the chief characteristics of modernization.

(4) Rise of New Social Classes:- The traditional social classification in India is based upon caste system. The caste system is incompatible with the egalitarian social values. Under it the status of a person is determined by his birth. Whatever may have been the merit and use of caste system in the past, there is little doubt that in the modern society it is an obstructive force; it is retrograde; it is against the democratic values. Due to current politicization the importance of caste system is growing; but from all other viewpoints its value and importance is declining. Today, both in the towns and villages, the people are divided into classes based upon economic and political considerations rather than caste considerations. The distinction between lower, middle and upper classes is exclusively economic. The classes based on economic consideration are non-hereditary.

(5) Social Change:- Modernization accelerates the pace of change; it is quickened. The change is both the characteristic the goal of social change. Change is a cultural goal towards which every society advances. The change must be towards the achievement of greater human dignity and greater social equality. It is a progress towards democratic values. The social change can be seen in diverse fields. On the one hand, social movements have greatly changed our ideas and concepts about various social matters, and on, the other, youth movement has brought about revolutionary change in the thinking and aspirations of youth. The youth movement can be seen all over the world, this is an important characteristic of modernization and the pace of modernization gets accelerated by these movements.

(6) Westernization:- The trend towards modernization in India can be seen in the form of movement towards westernization of the society. The trend towards westernization can be seen in all fields. In social, economic, political, cultural, religious and educational spheres India is following the example of West. Even those who are in favour of retaining the traditional values also want to utilize the good points of the western system. They want a synthesis of western and Indian values. The westernization leads to modernization because the model of modern society is provided by the West. In the social sphere we are following West in matters like dress, life style and town planning etc.

(7) Democratization:- In the field of politics, the most characteristic feature of modernization is the process of democratization. India is becoming progressively democratized. There is in India universal adult franchise. Everybody above a certain age is entitled to elect his representative. Everybody is equal before law and enjoys equal rights and privileges. In the economic sphere an attempt is being made to reduce economic disparities. The compulsory primary education is aiming at universal literacy. All political parties are wedded to the true values of Equality, Liberty and Freedom.