Relationship between Culture and Education

Education and culture are intimately and integrally connected. Hence, the cultural pattern of a society conditions its educational pattern. For exampl

Relationship between Culture and Education

Due to rapid progress of scientific inventions and technological advancement, material aspect of culture has gone ahead and its area has been greatly widened. The modern society is gradually adopting more and more of these techniques and scientific achievements in their day to day styles of living, while the non-material aspect of culture has been left far behind. This vast difference between the material culture and the non-material culture is known as social and cultural lag. 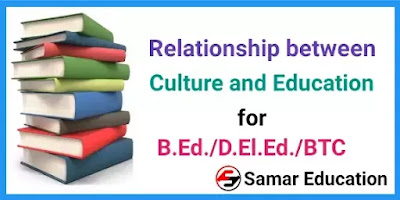 Influence of Culture on Education

(3) Influence of Culture on Methods of Teaching:- Culture and methods of teaching are intimately connected. It is why, the changing cultural patterns of a society exert powerful influence upon the methods of teaching also. In ancient times education was teacher-centred and tried to force into the minds of children specific dozes of knowledge-in quite disregard of their natural interests and needs. The result of thus artificial progress of education was mechanical cramming and rote memorization. In modern times, education has become child-centered.

(5) Influence of Culture on Text-Books:- Curriculum is contained in text-books. We have discussed above the powerful impact of cultural values upon the curriculum. These text-books are written according to the formulated or determined curriculum. It may be borne in mind that only those text-books are welcomed if they foster and promote cultural ideals and values.

(7) Influence of Culture on School:- According to the ideology of Pragmatism, a school is a miniature of society. The total activities and programmes of the school are organized according to the cultural ideals and values of the society which establishes and organizes the school.

Influence of Education on Culture

(1) Preservation of Culture:- Each country believes and flaunts the superiority of its own culture over the rest. Hence, it tries to preserve its culture in its original form. Education is the only means to complete his task. In other words, education preserves the culture of society.

(3) Development of Culture:- The function of education is not only to preserve and transmit the culture of society, but it also brings about the needed desirable changes in the cultural ideals and values for the progress and continued development of society, without which social progress will stratify and come to naught.

(4) Maintaining The Continuity of Culture:- Culture is the life-blood of a society. Without culture a society is bound to decay and die sooner or later. Education upholds the continuity of culture through its diverse activities and programmes. It may be noted that a society establishes schools to preserve and transmit its culture from generation to generation. But some schools try to develop cultural chauvinisin and superiority complexes among its children.

(5) Helping The Development of Personality:- Education aims to develop the personality of the child. For this, it employs diverse cultural patterns of thinking, behaviour and items of cultural values so that children are physically, mentally, socially and emotionally developed to the maximum extent.

(6) Removing Cultural Lag:- When material culture develops at a fast pace due to scientific researches and inventions, non- material culture consisting of ideals, values and norms lag behind creating a gulf between the two. Education is the only means to bridge this cultural lag by its activities and programmes of development.