Brahmins were once given a high level and Shudras were given a low level. In sociological language, this process is called social stratification.

In every society, a person or group is given high or low status on the basis of his caste, age, gender, occupation, position, rights and responsibilities etc. Take your Hindu society for example. In this, Brahmins were once given a high level and Shudras were given a low level. In sociological language, this process is called social stratification. 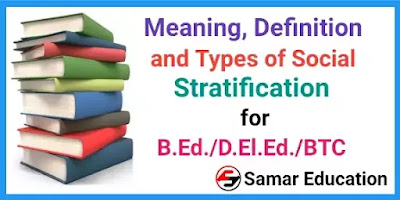 2. According to Moore, “Stratification is that orderly division of society in which the whole society is divided into some higher or lower social units.”

3. According to Sutherland and Woodward, “Stratification is simply the process of differentiation in which some individuals have a higher status than others.”

There are mainly two types of social stratification– Caste-wise and Class-wise.

# Caste Stratification:- Determining the social status of an individual or group on the basis of caste is called caste stratification; For example – Brahmins, Kshatriyas, Vaishyas and Shudras.

There are many bases of social stratification, such as caste, age, sex, occupation, economic status, position, rights and responsibilities, ability, skill and education. Every society, according to its social values, circumstances and needs, makes social stratification on any of these particular grounds. For example, in closed (conservative) societies the status of an individual is often determined on the basis of caste, gender and occupation and in open (progressive) societies on the basis of education, ability, skill, position, rights and responsibilities. Here some of the main bases of social stratification are briefly described-

Today, in almost all societies, whatever may happen in theory, but in practice it is seen that the social status of an individual or group in them is determined on the basis of its economic status. Neither caste nor business asks for rich people.

The present era is the age of science and experts. Today, in the progressive societies of the world, the social status of a person is determined on the basis of his knowledge, ability, skill and his specialty in a particular field. In open societies, those who make scientific inventions, innovate in their respective fields and do responsible work in high positions in administration get the highest position.

In almost all societies there are two classes- educated and uneducated and in every society educated people are given higher position than uneducated, and even among the educated the more educated he is given the higher position in the society. And the second thing in this context is that only through proper education a man increases his ability, increases his skill, attains high positions. Then it would go without saying that education is the basic basis of social stratification.

(1). The end of closed societies by education

Conservative societies based on caste and religion are called closed societies. As education is spreading in the society, these orthodox societies are coming to an end. Take our Indian society for example. It is based on caste and religion till date and in this the Brahmin is given a high position and the Shudra is given a low position from birth. But as the mass education is spreading, the superstitions prevalent in the society are coming to an end. Not only in our country, but in the whole world, the hold of caste and religion is getting loose and the importance of person's ability and skill is increasing.

It is possible to remove the society from the circle of conservatism through mass education, but it cannot be made a progressive society. For building a progressive society, along with mass education, vocational, scientific and technical and administrative education is required. Today almost all the societies of our world are trying to arrange this type of education and through education their nature is becoming progressive and in these societies individual social stratification is being done on the basis of their merit and position.

Structural functionalists argue that social inequality plays a vital role in the smooth operation of a society. The Davis-Moore thesis states that social stratification has beneficial consequences for the operation of society. Davis and Moore argue that the most difficult jobs in any society are the most necessary and require the highest rewards and compensation to sufficiently motivate individuals to fill them.

Certain jobs, like mowing grass or cleaning toilets, can be performed by almost anyone, while other jobs, such as performing brain surgery, are difficult and require the most talented people to perform them.

In order to lure the most talented people away from less important work, a society must offer those people rewards and incentives. Davis and Moore further claim that any society can be equal, but only to the extent that people are willing to let anyone perform any job. This would also require that even those who do their job poorly are rewarded equally.

Social stratification is the main reason for relational set of inequalities in economic, social, political and ideological dimensions. It is a system whereby people rank and evaluate each other. On the basis of such evaluation, one is rewarded with more wealth, authority, power and prestige.

It is broadly organised into three parts: upper class, middle class and lower class on the basis of power and wealth. This has resulted in the creation of a number of levels within our society.

Social stratification causes social disparity and many problems as it is an unjust system with monopoly of power and wealth in a particular group. It affects life chances, lifestyles and prestige. It creates emotional stress and depression for the people belonging to lower social stratum as they have unequal access to wealth, power and prestige.

It creates a huge gulf between the people in terms of their incomes and a range of measures associated with social position, education, health, and psychological well-being. It is distinctly perceived that disparity causes chaos in society. These are the stumbling blocks in the way to progress and development of the country.