Education as an Agent of Social Change

Change is the law of nature. Education plays an important role in molding the structure of a society. The role of education as an agent of social

Education is as an Agent of Social Change

Change is the law of nature. Education plays an important role in molding the structure of a society. The role of education as an agent of social change is widely recognized. The socialization of the young generation and maintenance of proper social order is among one of the main functions of education. The following points are given below regarding to social change- 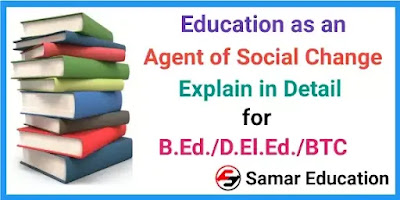 1. Assistance in Adopting Social Change:- Whenever some social change occurs, it results in changes in the pattern of doing some work. This change is easily adopted by some people while others find it very difficult to adjust themselves to this change. It is the aim of education to make all good changes easily accessible to every person.

2. Overcoming Resistance to Change:- Certain factors make it easy to some social innovation to be adopted and accepted, but on the other hand, certain factors create resistance to acceptance. The best way of overcoming such resistance is education. Through the medium of education, the importance of social change is convincingly explained to the people so that they are urged to their prejudices and blind faith, and thus, enabled and also strengthened to accept something new.

3. Analysis of Change:- Progress occurs only when the change leads the society to more desirable social values. And for this, analysis and criticism of social change is essential. Only the educated individual can make valid criticism and offer constructive suggestions, because it is education which invests the individual with the capacity to use his intelligence, to distinguish between right and wrong and to establish certain ideals. Education determines the values which act as a criterion for the analysis of social change. Through this analysis and criticism, undesirable social changes are prevented and desirable social changes encouraged. In every society, this is achieved only through the effort of rational and educated people.

4. Emergence of New Changes:- Since the educated class is constantly engaged in an analysis of contemporary society, it also makes frequent suggestions for improvement. It is on the basis of such suggestions that social reform movements are set into motion. The flood of social reform movements at the turn of the century was due to modern education. Educated people made a study of western societies and their institutions compared both with our own, and agitated public opinion towards the abolition of many social evils such as child marriage, objection to widow remarriage, unequal rights of woman, the custom of women committing sati etc. Only through education could the importance of such changes be made apparent to the people.

5. Leadership in Social Change:- If social change is to be directed properly, it is necessary to have able leadership well-acquainted with the complexity of the problem. Such leaders can be created only through education. For this reason social welfare workers must first be educated before they are unleashed on society. On the one hand, education creates in them a consciousness of social change, while on the other, it teaches them to distinguish between the good and the bad. Education, in India, must be able to create appropriate leadership at every level of social changes conducive to democracy are to be introduced.

6. Educating the People of Social Change:- Only a properly organized system of education can generate in the people of a society the ability to adopt some social change. As a result of education individuals learn to analyse their customs and traditions to criticise them and to cooperate in movements for social reform. The educational system has played a major role in bringing about revolutionary social changes in England, France, America and Russia.

7. Advances in the Sphere of Knowledge:- New research and inventions all depend on education because only educated person can discover new things in every field. Only such people can help in the progress of non-material culture. Fresh discoveries in the sphere of knowledge provide the right basis for criticism of society. Then the need for change becomes apparent. Thus, education contributes to social change by bringing changes in knowledge.

8. Transmission of Culture:- Through its function of transmission of national culture from generation to generation as continuous process education lends stability and continuity to the society, Not only this, education prepares society to adopt needed and desirable social reforms. In this sense, education is the creator, generator and director of all social changes. In short, education is a conservative, consolidating and stabilizing force and in addition, it is a creative forces as well.

9. Removal of Obstacles:- Various obstacles impede the march of social changes and reformations. Education informs people about their importance and desirability. Not only this, it tries to remove the mental reservations and complexes in the minds of people, which obstruct the progress of change.

10. Increasing The Areas of Knowledge:- Education promotes in the individuals the capacity to increase their areas and scope of knowledge more and more for their benefit. It opens new vistas for deeper and investigations and researches, which bring about desirable changes in material as well as non-material aspects of culture. Thus, education prepares ground for the advent of social change.

11. Maintaining Human and Social Relations:- In an industrial society, development of new techniques and devices, very often, lead to social laxity, disunity and discord among section of people. Education strives to maintain and consolidate human relations inspite of these social changes in attitudes and patterns of behaviour of people.

It is evident from the above account the educationists, educators and schools have a tremendous expectability in social change. Defective education leads to defective social changes. Hence, if society is to change in the right directions, it is essential that attention may be paid to the education system this alone can create future generations of critics of change and leader of reform.