Individual and Social Aim of Education

Individual aim of education means that education should develop individuals according to their interest, capacities and specialities. It should be not

Meaning of Individual Aims of Education 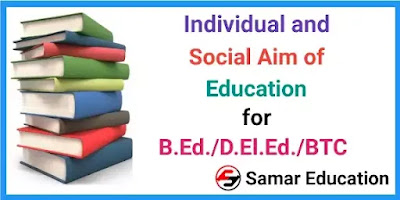 Wider Meaning of Individual Aim:- In its wider sense, individual aim is known as self-realization. Psychology also corrobrates the wider aspect of the development of individuality. This is because psychological researches have clearly established the fact that each individual is born with his own peculiar and distinct innate tendencies and capacities.

Arguments in Favour of Individual Aim

(1) Supports by Psychologists:- Each child has distinct instincts and inherent tendencies. If he is not allowed to behave according to his nature and contrary to this, social ideals together with social forms of behaviour are forced upon him, he will become a mental patient.

(2) Support by Scientists:- Biological science asserts that each child an individuality of This own. His innate nature cannot be changed by has an any means. As each child is a distinct entity, a new organization and a new experiment of life, he aim of education can be nothing else but to develop his unique individuality naturally and distinctly.

(3) Support by Progressivists:- For his own good, the individual creates society to preserve, purify and transmit its culture to the rising generation, so that social progress goes on continually. This clarifies the issue that the development of individuals will naturally lead to the development of society.

(4) Support by Educationists:- Eminent educationists like Rousseau, Pestalozzi, Froebel, T P Nunn and many others support the individual aim of education. Nunn emphatically remarks "Individuality is the ideal of life. A scheme of education is to be valued by its success on fostering the highest degree of excellence."

The following arguments are generally advanced against individual aim of education-

(2) Inapplicable to Real Life:- Acceptance of this aim presupposes that each child should be provided all facilities and communities to develop himself in his own ways and according to his own interests and inherent tendencies. To achieve this aim the formulation of aims and construction of curriculum for each child shall be essentially different from the other. This is an almost impossible and impracticable presumption beyond the capacity and resources of even the richest country of the world.

(3) Encouragement to Individualism:- Individual aim of education will make individuals self-conceited and proud and this may lead to immoral behaviour and unhealthy attitudes. Despots and dictators like Hitler, Mussolini and Stalin developed out of such feelings of superiority and self-conceit. Thus, society will suffer objectly under the consequences of individualilsm.

(4) Enemy of Socialism:- Advocates of individual aim prescribed unrestricted freedom to the individuals. But this unlimited freedom will result in indiscipline, defiance of social norms, rules and code of conduct by the individuals. A few people will enjoy all the benefits and exploit the test for their own welfare and prosperity. In other words, this aim will promote the interests of capitalists and monopolists. People wedded to socialism will never accept this aim to be persued.

(6) Undesirable Change in Environment:- According to this aim the individual needs favourable situations to adjust himself with the environment. It is not a desirable ideal. The ideal should be to bring about a change in the environment according to changing needs of the time.

(8) Disregard to Environment:- This aim wants to sublimate, modify and purify the basic instincts of a child. This is not enough.. Psychological researches and findings have proved that environment is also a great force in the development of the child.

(9) Hindrance in the development of Reasoning Power:- Individual aim of education provides unlimited the unrestricted freedom to the individual which makes him a man of arbitrary decisions and reckless actions. Thus, the power of reasoning and argumentation cannot develop properly in the children if this aim is blindly accepted.

Some educationists have laid greater emphasis upon the social aim of education so that education develops in the children social feeling which will make them contribute their utmost to meet the demands of society after meeting their own needs. These educationists evaluate the society higher than the individual. They believe that man is a social being. He cannot live without society.

Narrow Meaning of Social Aim:- In its narrow meaning, social aim of education is equated with state socialism. In this sense, liberty of the individual is totally curtailed and all aspects of individual life are socialized. In other words, total power is concentrated in the state.

Wider Meaning of Social Aim:- In its wider sense, the social aim is equated with democratic socialism. In this sense, it does accept the importance of state but at the same time does not agree with the insignificance of the individual before the state.

Arguments in Favour of Social Aim

The following arguments are given in favour of social aim-

The following arguments are given against social aim of education-

(1) Unpsychological:- This aim is unpsychological. It neglects individual differences and emphasises to prepare the individuals to fulfil the needs and requirements of the society or the state alone.

(2) Man only a Means to Some End:- The protagonists of this aim consider man as a means only for the social good or national welfare. It should be remembered that this concept of the individual makes him very insignificant in comparison with the end or the goal.

(3) Hindrance in the Development of Art and Literature:- According to this aim, there is no room for individual liberty and initiative. Hence, there is little hope regarding the development of any art or literature.

(4) Wrong Use of the Agencies of Education:- Social aim considers social good much higher than the individual. Hence, all the agencies of education are exploited for the purpose of social development only to the total neglect of the individual together with his needs and requirements.

(5) Historical Evils:- Social aim, in its narrow sense, emphasises the concentration of absolute power in the hands of the state which enforces complete surrender and blind obedience by the individuals to the dictates of the government. Dictators like Hitler and Mussolini being intoxicated with such power destroyed themselves and their countries totally.

(6) Development of Narrow Nationalism:- Social aim infuses a feeling of narrow nationalism chauvinism in the individuals. Being fired with such narrow ideas of national superiority such individuals consider other states to be inferior to their own state. As a consequence, international conflicts flare up which escalate into world wars.

(8) Society not above Man:- Social aim subordinates the individual to the position to the state. Over emphasis on state dwarfs the individual. As a matter of fact, the individual should be provided communities to develop his native endowments to the fullest extent. When individuals will be developed, the development of society will be natural corollary.

(9) Misuse of Science:- If the state monopolises education it may exploit the power of science to suppress the individuals. It should be noted that science is wedded to human welfare. But sometimes its power has been misused to suppress human freedom and make individual subject slaves. We see that fathers of science namely Brunoe and Galileo suffered a lot at the hands of their state and the society.

(10) One-sided Education:- Social aim of education emphasizes the development of citizenship qualities and social efficiency only. This obstructs the mental, aesthetic, spiritual and artistic development of individuals. Only one-sided development of the individual will stunt growth and development in other spheres and areas.

Synthesis Between Individual and Social Aim of Education

By nature man is social. His whole life is closely related to society. In isolation, the man will not survive. Hence, it is not expected of him to behave against the social norms and ideals. As it is inconceivable to believe an individual without society, so also a society without individual is inconceivable. The society is an organisation of individuals brought into existence by the individuals themselves for their own good and welfare.

At last, according to above discussion we can say that both aims should have priority in present democratic India.