The English word 'Existentialism' is derived from the words "Ex and Sistere". In which Ex means- 'outside' and Sistere means- 'to stand'. Therefore ex

The English word 'Existentialism' is derived from the words "Ex and Sistere". In which Ex means- 'outside' and Sistere means- 'to stand'. Therefore existentialism is that philosophical approach, in which a person tries to clearly place his existence on the world stage. Existentialism is a bondage free thought. It can neither be called philosophical thought nor social thought. This is neither political thought nor economic thought. It has developed in opposition to the pre-determined principles and rules of all these contemplations. It also considers science and technology as anti-human. He believes that all these have negated the individual dignity of man, that is, his existence. 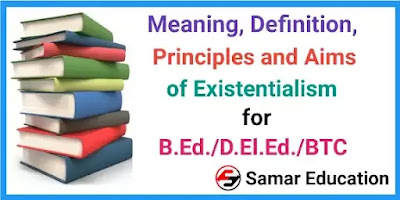 According to Saatre, "Existentialism is nothing but an attempt to produce all conclusions in a cohesive atheistic situation."

From our point of view, this school of thought should be defined as follows- "Existentialism is such a free thought that does not believe in determinism and predetermined philosophical, social, political, economic and scientific principles and rules and propounds that human beings He exists in himself and is free to choose what he wants to be. Man is what he has become or can become and his becoming depends on his own efforts."

(1). Existentialism is more important than essence:- Descarte's key quote is- "I think therefore I exist." This is not accepted by the existentialists, but according to them the existence of man is first, then only he can think. Man develops consciousness about being alive only after his existence. Existentialists consider man to be the creator of values. Prof. Saatre says- "I only include myself. This type of feeling is a sense of ego, and because of this, he tries to improve by knowing the shortcomings of the work he has done."

(2). Truth and Knowledge:- Existentialists believe in intuitive knowledge. Knowledge is human. True knowledge is the knowledge gained by a person from experience, this is the truth. Truth is the subjective, accurate, highest system of self-realization of the individual. It is the result of abstraction.

(3). Freedom:- To accept the existence of man, it is necessary to consider him as the "choosing agency". His freedom is complete. What is a man to be? He is completely free to choose it. The process of choosing and being created is within the human being's own existence. A person is the image of God in a subtle form, who can act with freedom.

(4). Supporting Personal Values:– In existentialism, values are completely personal. Therefore, true and false and good and bad are only personal values. Which each person can interpret in their own way. Existentialism considers man to be heavily burdened and man cannot find shelter in any superpower for his failure.

(5). Nature of Human:- Existentialists consider man to be full of all qualities, capable of taking decisions of his life and being conscious. Blackholm writes that- "Human being cannot be defined because it is not a given thing, that is the question. Human possibility is only the power to make it self-existent. Its existence is undetermined because it has no cessation. Human beings are mere conscious beings." Not only this, but he is uniquely endowed with self-consciousness. He thinks not only of thought but also of thought.

Existentialism philosophy has its own principles, about which our knowledge is necessary and these principles are as follows-

Existentialist philosophy is so revolutionary and complex that it has received little consideration from the point of view of education. The emergence of existentialism is an opposition to the "conceptualist" idealism of Hegel, a German philosopher. We have also read in the past that this is a special stream of egoistic philosophy. If human beings are considered capable of taking their own decisions, having consciousness, deciding their life conditions, then in such a situation the need of education proves itself. The influence of this philosophy was not reflected in Indian philosophy. But it is clearly mentioned in western philosophy.

Aims of Existentialism and Education

According to Prof. Aude, the objective of existentialist education is based on the following concept - man is free, his destiny is not predetermined. He is free to be whoever he wants to be. Man is the agency to choose his actions, he has the freedom to choose. The objective is determined on the basis of-

(1). Development of an independent personality:- Being a selecting agency, a person has to be completely involved in the selection process. Therefore, the aim of education is to develop the complete personality of the child.

(3). Developing the ego and desire in man:- Prof. Martin Heidegger has said in this regard- "True personal existence is a collection of desires imposed from above and desired from within." Therefore, existentialism believes that the aim of education should be to develop human ego along with desire.

(4). Preparation for real life:- Human existence will be suffering and suffering in life. Therefore, according to existentialists, the aim of education is to make the child able to bear the struggles, sufferings and torments that may come in a responsible life in the future. The existentialist is in favor of teaching death.

(5). Developing personal knowledge or intuition:- In this regard, Prof. Beauber says- "Man is not a stone or plant" and according to existentialism, two things believe - that humans work with their intelligence and understanding, so existentialists According to him, the aim of education is to develop personal intuition or intuition and help human beings to make decisions for their actions.