Meaning of Philosophical Basis of Education

The literal meaning of the English word Philosophy is affection for knowledge. Indian interpretation penetrates more deeply, because according to the

The literal meaning of the English word Philosophy is affection for knowledge. Indian interpretation penetrates more deeply, because according to the Indian concept, the field of philosophy is not limited to knowledge but encompasses the whole personality in itself. Philosophy is not a matter of contemplation but a matter of feeling. The overall personality changes due to the sense of intellectual fulfillment through philosophy. If it is said in the language of self-realistic Indian philosophy, then it is true that only self-knowledge through philosophy leads to self-realization. 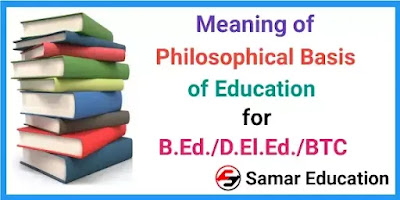 Relation between Philosophy and Education

Philosophy and education complement each other. To understand the purpose of education, system and organization of education and development of teaching methods etc., it is necessary to acquire knowledge of philosophical thought streams. That is why Fichte has said that, "Education cannot achieve perfection and clarity without the help of philosophy".

Education is the means of development of human life. Education has a special hand in creating the conditions. Philosophy creates the goal and education acts as a means of achieving this goal. Therefore there is a close relationship between philosophy and education. Adams has said that, "Education is the active side of philosophy. It is the active side of philosophical thought and the experimental means of achieving the ideals of life".

In relation to philosophy and education, Rusk wrote that, "from every angle of the education problem thus demands a philosophical basis of the subject". There is no escape from the philosophy of life and education. Those who show pride in neglecting philosophy also have a philosophy, albeit a completely inadequate one, as Schopenhauer puts it, "every person is a philosopher by birth".

The relation of philosophy and education has been expressed by Butler in these words, "Philosophy serves as a guide for the educational process, whereas education being a field of research presents some kind of provided material which is the basis of philosophical judgments".

Thus it becomes clear that there is a close relationship between philosophy and education. Expressing his views in this regard, the famous educationist Dewey has said, "Philosophy can be called the general principle of education". Gentle says, "Those who believe that the process of education can go well without a connection to philosophy, show an inability to understand the pure nature of education".

(1). Impact of philosophy on education

(2). Impact of education on philosophy

Impact of Philosophy on Education

Impact of Education on Philosophy

Education influences philosophy due to the following reasons-

In ancient India, any type of thinking was called philosophy, but as the field of knowledge developed, we started dividing it into different disciplines; Such as anthropology, theology, economics and medicine etc. That branch of knowledge in which the ultimate truth of this universe is discovered, we have given it the name of philosophy. In the Upanishad period, philosophy was accepted in this form. Then the definition of philosophy was- "that which is to be seen, that is, to see the truth, is philosophy".

In the search for the ultimate truth, we had to ponder over the nature of the universe and its doer and non-existent cause. Philosophers thought the most on the real nature of man himself and in that context there was a lot of thought on the soul-Parmatma, the living-world, knowledge-knowledge, means of acquiring knowledge and the causal and non-actionable actions of man. Later on, all this became the subject matter of philosophy. Philosophy in our country is still accepted as the ultimate truth-searching scripture. In the words of Dr Sarvepalli Radhakrishnan- "Philosophy is a logical interpretation of the nature of truth".

It is clear from the above discussion that there is a slight difference between the Indian approach and the western view of philosophy and that even today in most of the Indian philosophy, the first is the creation-creator, soul-Parmatma, life-world, knowledge-ignorance and human life. The ultimate objective of the mind and the means to achieve it are considered and then taking this knowledge as the basis of reason, all the knowledge-science of man and all his material and spiritual achievements are logically discussed. Whereas in most of the western philosophies, there is a tendency to reason without considering the creation-creator, soul-parmatma, soul-world etc.

Without understanding the mystery of human life, how can one be sure of what is useful to him! We Indians should not blindly imitate western philosophers. Our sages have given us true philosophy, on the basis of which we can give a true explanation of any object or action. From our point of view there is no existence of philosophy without metaphysics, knowledge and logic and philosophy of values and ethics. Even today, we have our attitude towards this universe, making it the basis of logic, we discuss all the objects, actions and knowledge-science of the world. From our point of view, philosophy should be defined as:

"Philosophy is that branch of knowledge which deals with the ultimate truth of the entire universe and the real nature of human being, the creation-creator, the soul-Parmatma, the soul-world, knowledge-ignorance, methods of acquiring knowledge and the ultimate aim of human life and achieving it. The means are logically discussed".

(3). Values and Ethics:- In the field of values and ethics, there is a discussion of the ideals and values of human life, the means to achieve the ultimate purpose of human life, and the causal and non-actionable actions of human beings. Discussion ensues. The discussion of causal and non-actionable actions is called ethics. We know that any ideal assumes the form of value only when it is reflected in our conduct, becomes part of our conduct. In this, along with the explanation of this word, the methods of attaining the real beauty of life also come. Whatever has been thought and thought in this area so far, its logical analysis is its subject matter.

The history of the world tells that the development of the educational institution was first done in our country India and in the Vedic period (2500-500 BC) a rich education system had developed here. At that time the education was based on Vedic religion philosophy. After Vedic religion, 500 BC to 1200 BC in this country. Until then Buddhism dominated. This is called the Buddhist period.

Today there is hardly any country in the world which does not put forth its philosophy of life in determining the nature of its education. In our country, from the very beginning, education has been based on religion and philosophy. But before the arrival of the British, it was based only on a particular religion and philosophy of India. The British introduced us to western philosophies- Idealism, Realism, Naturalism and Pragmatism during their reign and introduced them to their philosophical thought along with their educational thought and also the beginning of their application.

Meanwhile, there has been a drastic change in the nature of discipline in the education of our country. Once in our country, following the orders of teachers was considered as discipline and there was a provision of atonement in case of mistake. After this, the legislation of strict penal system for the establishment of discipline started and this legislation continued till the beginning of the twentieth century. At the beginning of the twentieth century, the American philosopher Dewey defined discipline as an internal force of man that leads man to think and behave socially. According to Dewey, the development of power in man occurs automatically by participating in social activities. According to Dewey, for the development of this discipline, there should be a loving, sympathetic and supportive environment in the schools.