Intelligence is the ability to acquire and apply knowledge. Intelligence is defined as mental capability that involves the ability to reason, to plan, to solve problems, to think abstractly, to comprehend complex ideas, to learn quickly and to learn from experience. More generally, it can be described as the ability to perceive or infer information, and to retain it as knowledge to be applied towards adaptive behaviors within an environment or context.

Two factor theory was propounded by Charles Spearman in 1904. fle concluded that intelligence is comprised by two factors, viz. "General ability" known as 'g' factor and Specific ability known as 'S' factor. This theory states that every cognitive task involves a general factor 'g' which it shares with all other cognitive tasks and a specific factor 'S' which it shares with none.

To state in simple terms, Intelligence is composed of two factors. One is general factor 'g' which is involved in all walks of life and ether is specific factor or 'S' which is reflected in a specific or particular ability e.g. musical ability, artistic ability etc.

The performance on any cognitive task is predicted by the formula-

However, this formula suggests that both 'g' and 'S' factors participate equally in affecting the performance (P). Actually they vary in different activities. Vocabularly is very closely related to 'g. So the performance on vocabularly should be written as

Whereas, performance on the test of aesthetic judgement may depend on training of art and some specific ability. Here we would write the formula

The exact nature of 'g' is unknown. Figure showing the relationship between 'g' and 'S' abilities. 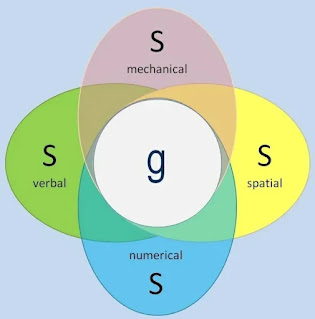 Later on Spearman propagated Three Factor Theory. After the indoctrination of Two Factor Theory he introduced another factor of intelligence in his previous theory and that is Group Factor denoted by 'G which is superior to general ability but inferior to Specific Factor i.e., 'S'. Now his formula was