Meaning, Definition, Need and Importance of Education and National Integration

National Integration most simply and briefly means national unity. National Integration is the awareness of a common identity amongst the citizens of a country. It is unity in diversity. It means unifying all the forces in the country so as to give the idea of one nation. National Integration involves, the sentiments of nationalism the feeling of oneness. Social, political, economic, linguistic and cultural unity, common ideas of life and common code of behaviour, the ability to subordinate sectarian and parochial loyalties to loyalty of the nation. 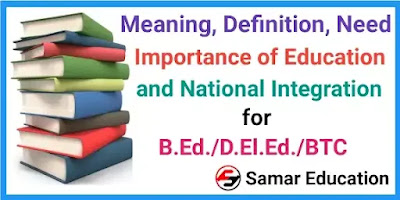 (1). According to Ross, “National unity is an inspiration, influenced by which people living in one country keep goodwill with each other as citizens of one nation and together they are active for the progress, security and welfare of the country.”

(2). According to Professor Humayun Kabir, "National unity is that which is based on the feeling of belongingness towards the nation."

(3). According to Brubaker, "National unity refers to a wider area of ​​patriotism than patriotism. National unity includes, apart from place, the relations of caste, language, history, culture and traditions."

National Integration is the bond and togetherness between people regardless of their case, creed, religion or gender. It is the feeding of oneness, brotherhood and social unity under communities and society in a country. National Integration helps to keep the country unified and strong from with in despite the diversities. So, the importance of national integration can be from the fact that the nation which remains integrated.

It will always progress on the track of development and prosperity. National Integration plays a dynamic role in making the country a one. This happens only by uniting every section of society. It provides an equal opportunity for each citizen. It also offers an equal platform in terms of social, cultural and economic development.

National Integration principally aims at providing a better environment for the people of a country Thus they can develop themselves in all the aspects. It also aids to bind multi-racial and multilingual country like India, which has people with diverse culture and tradition. It also multiples the union of brotherhood amongst communities, societies and the people.

National Integration also helps in keeping the stability of a country and adds up to its whole development. It supports to nature communal harmony and fights casteism, regionalism, and linguism, etc. National Integration improves the feeling of loyalty and fraternity towards the nation. It unites the people in case of any national emergency.

The concept of national integration is multidimensional. Its rules are as follows-

(1). Social Integration:- For social unity, it is necessary to have love, cooperation and tolerance, faith in democracy and humanism, selflessness, adjustment, social responsibility, social sensitivity and a sense of social justice among different sections and communities of the society.

(2). Cultural Integration:- Cultural integration means establishing harmony among different religious, linguistic, regional communities regarding the superiority of them. The development of a common national culture by the sum of all the subcultures can maintain the cultural unity of the nation.

(3). Linguistic Integration:- For linguistic unity, it is necessary that people should stay away from linguistic immunity, respect all languages, study each other's language and exchange ideas in them and make a common language the national language. Give rating.

(4). Economic Integration:- For economic unity, it is necessary that economic inequality in the society should end. There should be no class discrimination on economic basis, no one should be exploited and the standard of living of the common people should be improved.

How to Promote National Integration

A. Advantages of National Integration

National Integration plays a very important role in political, economic, cultural and social dimensions of a country. It helps the country in the following ways:

National Integration makes the people of a country be present in harmony. This works only by strengthening the social bond between them. It indorses brotherhood, peace, and tolerance among them.

National Integration aids to unite people of different race, caste, creed or thoughts and makes the country as a single entity. It strengthens the country and makes it powerful on the international platform.

E. Promotes Loyalty for the Nation

National Integration indorses loyalty of the citizen for the country. It aids to make people join hands and stand for the advancement of the country forgetting their petty issues.

India, is a country with innumerable diversities, an entity of many communities, races classes, languages and subcultures. In any such nation, there are many obstacles to the achievement of national integration.

Caste is an imported part of our social fabric. This was developed in the past on the basis of division of labour in the society. But now casteism has segregated the society. Unity and integrity has become a dream in a caste ridden society. The feeling of socially neglected scheduled castes under the suppression of upper caste ruined the sense of we feeling and unity. It becomes a problem of national integration.

Religions antagonism has posed a serious challenge to national integration in India. India is a multi-religious land. Political manipulation has projected one religion against the other which resulted in communal riot, bloodbath, mutual, distrust and disintegration of the country. Large scale illiteracy and superstition are responsible along with other causes for raise communalism in the country. It is very difficult to promote national integration under these situations.

Multi-linguism is one of the important characters of India. India has fifteen officially recognized languages. There are about 1652 languages are spoken in India which shows its diversities. There is conflict and riots of the languages issue. People of one language try to establish their language over others. When Hindi was declared as the national language people of South India resented against this decision supporting English language. Language issue became a barrier on the way of national integration.

There are several regions of India having their unique traditions, food habits, dress and languages. Each regional differs from the other in one or other ways which leads to disintegration of the country. People of one region compete with the person of other regions which leads to conflict and riots. Land dispute, language problem are some of the reasons which pose hurdle on the way of national integration.

Economic standard of people in a state depends on the fertility of land, resources available and manpower management. All the states are not equal in the above matter which leads to economic backwardness of the people. Even in a state distribution of wealth is not properly done. Day by day poor becoming poorer and rich become richest this causes tension and conflict. It is a problem of national integration.

Aims of National Integration and Education

In order to develop the spirit of national integration, the following objectives of education can be set-

Role of Teacher in the Development of National Integration

The success of education depends on the teacher. The attainment of national unity through education can be possible only when the teacher is qualified, expert in his subject, he has complete knowledge of the glorious civilization and culture of the nation, he is the historical, geographical, political, social, economic and Be fully aware of industrial problems. He has the ability to put his views in front of others in a strong way and should be liberal, broad outlook, aware of his duties, there should be no difference in his words and deeds, who considers social service as his religion, who Be imbued with the feeling of patriotism and wish to lay down your life at the time of crisis at the sacrifice of the nation.