Human life and its circumstances are not always the same. But there must be some kind of change in its thoughts, ideals, values and sentiments.

Meaning and Definition of Social Change

Human life and its circumstances are not always the same. But there must be some kind of change in its thoughts, ideals, values and sentiments. When man changes himself, he, being a unit of the society, also changes the society. Although change happens rapidly in some society, it is slow in others. This process is called social change in sociological language. 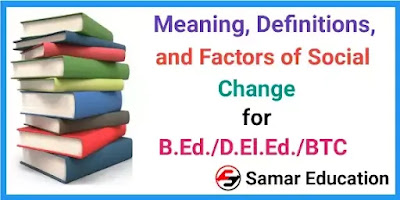 Change is the law of life. Today, due to scientific inventions, use of new machines, means of transport and telecommunication, revolutionary changes are taking place every day in modern society as compared to ancient and medieval society. These changes are being termed as social change. Nowadays social change is happening at a rapid pace all over the world. Some of its important definitions are as follows-

1. According to Maclver and Page, "Change in social structure is social change."

2. According to Johnson, "Social Change may be defined as modification in ways of doing and thinking of the people."

3. According to Jones, "Social change is a team to describe variations in or modifications. of any aspect of social processes, social patterns, social interaction or social organizations."

4. According to Dauson and Gatis, "Cultural change is social change."

The following characteristics can be seen in social change-

There are two chief theories of social change-

1. Linear theory:- The proponents of this theory are considered society pervades with political upheavals chiefly. Most of the changes in the society are due to political reasons. Political stability brings about continuity and stability-in the society, while instability brings about social change. The independent India has embraced democratic system, and this has greatly affected the life of Indians. Indians have become conscious of their rights and duties, their interest in elections has increased and they have started to understand the national problems. Politics has entered educational institutions even. It has benefitted as well as harmed. Thus, the political factors have played an important role in bringing about social change in India.

2. Technolgoical Theory:- This theory was laid down by Ogburn. He said that the basis of all types of social change as those changes occurring in the technological field and stablished relationship between social change and inventions. He says that by new inventions is meant the discovery of new cultural traits and elements. This discovery can be in the change of the present cultural or can be entirely new. When the society starts to adopt it, change occurs in the society.

The following are some important factors-

1. Vested Interests:- There are such people also who do only those things which are rooted in their vested interests and they do not want to do any such thing which may be an obstacle in their selfish interests. These people are hardly interested in social welfare, their own selfish motive is the supreme. For example, when the custom of privy purse was abolished, the rulers opposed it; in the same way when the zamindari custom was abolished, it was opposed by the landlords. Such types of vested interests are an obstacle in the path of social change.

2. Fear of Novelty:- There are many people in the society who are satisfied with their social condition and are committed to it and think it secure for them. They think that any new object or thought can harm them, so they do not bring any change in the society. In such a case, new things cannot take place in the society.

3. Isolation:- There are such people in the society who want to isolate themselves from others and desire that their culture should be preserved; so they do not want to come into the contact with other cultures. The society pervaded by this sentiment will be inflicted by isolation, and change in that society will not be possible. So it is also an obstacle in social change.

4. Cultural Inertia:- There are several people in the society who consider the thoughts and believes of the ancestors as fully justified and profess that we should accept them. By cultural inertia is meant those values, beliefs and traditions inherited from our ancestors which we are reluctant to give up. In such a case, it is not possible to effect social change in any way.

The second thing about education is that it is a dynamic process. It accepts the changes taking place in the society and moves forward and helps man in fulfilling the needs of the changing society. It can be said in other words that social changes change the nature of education and curriculum etc. In this way education creates social change and social change affects education and this cycle continues forever.

(2). Conservative education:- Conservative education refers to that liberal education which is basically based on the culture and religion of the society. Through this education, cultural and narrow-mindedness develops in the children. When these children grow up, they do not accept any social change against their culture and religion. Therefore, even in such a society, social changes take place very slowly.

(4). Vested interests:- People also oppose social change because of their selfishness. Take your Indian society, on the one hand women are trying to get equal rights as men, then on the other hand men are trying to maintain their supremacy. Women's reservation is a living example of this.